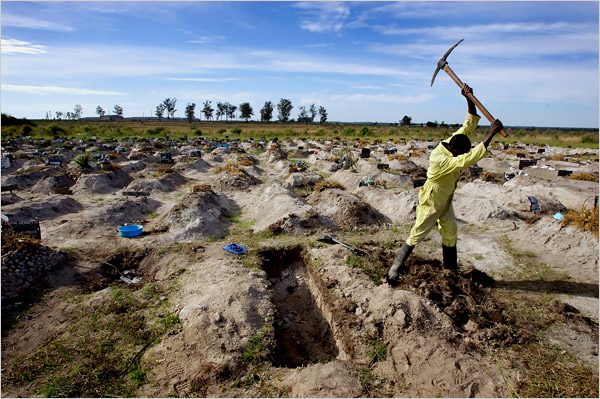 A NKAYI family in Matabeleland North in Zimbabwe has been forced to exhume a body of a Mosotho man it buried in December after it emerged that they collected a wrong body from a South African funeral parlour.

The family buried the body of Tanki Sotato, from Lesotho, after mistaking it for their late relative, Tendai Nkala (31).

Both were both murdered at two different squatter camps and were taken to the same parlour in the neighbouring country.

Both bodies were taken to the same funeral parlour, resulting in the Nkalas collecting the wrong body on December 3.

They then buried the wrong body in their village in Zenka, Nkayi in the Matabeleland North province of Zimbabwe.

The parlour later realised that an error had been made after relatives of the Mosotho man noticed that his body was missing on December 18 and a follow –up was made.

The two families met in South Africa and the Lesotho family gave the Nkayi family three months to return their relative’s body.

He said the body belonging of the Lesotho national was exhumed on Monday afternoon and Kings and Queens Real Funeral Services was returning the body to South Africa.

He said Nkala’s body will be brought home in due course.

“The community of Nkayi has just witnessed a traumatising experience when a family has been made to exhume a body they buried two months ago.

“The body was taken on Monday and will be repatriated to South Africa. Fortunately, the coffin was still intact, making the job easier,” he said.

Mr Mbewe urged people to check the bodies of their relatives on collection to avoid similar unfortunate incidents.

The Nkayi family spokesperson, Sifelani Nkala (43), said due to shock and trauma of losing their loved one to a gruesome murder, family members in South Africa failed to positively identify the body.

She said during body viewing back home, the whole body was covered in bandages, leaving only the mouth and nose so they did not realise that a wrong body had been repatriated.

Ms Nkala also said body viewing was done at sunset so it was not very clear.

“We were no longer at peace, imagining that there is a stranger’s body in our homestead. Their three months ultimatum to return the body haunted us even more. We are happy we are now clear and hopefully at peace with the foreign family. What’s left is for us to raise money once again and bring home our very own,” she said.

Ms Nkala said the deceased did not have a funeral policy and their family contributed R14 500 to repatriate the body and more than US$2000 on funeral expenses.

She said they have to raise funds again to bring their loved one to his final resting place. -The Chronicle