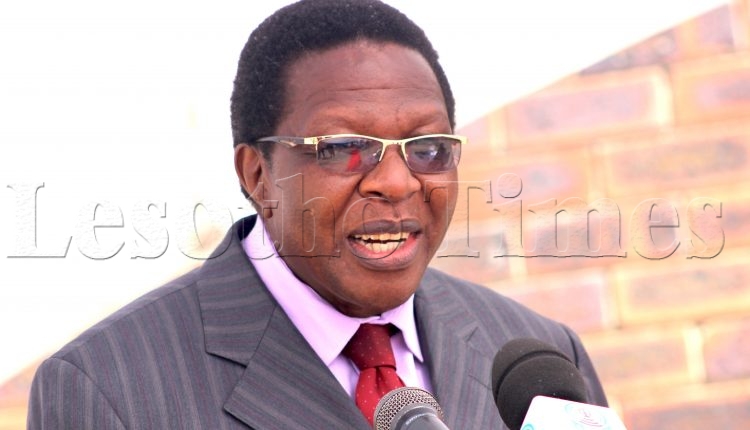 BASOTHO Action Party (BAP) leader Nqosa Mahao says the massive attendance at this party’s weekend rally is proof that the formation of the party has quenched the nation’s thirst for change after years of ruinous policies by the established parties and the governments they formed.

Professor Mahao said BAP was the answer to the myriad challenges of corruption high unemployment, poverty and other socio-economic ills afflicting the nation.

The rally at Koro-Koro was his first as leader of the BAP which was formed last month. This after the former All Basotho Convention (ABC) deputy leader dumped the ruling party after catching wind of an alleged plot to oust him. The plot was allegedly hatched by ABC leader and former premier Thomas Thabane, Prime Minister and new ABC deputy leader Moeketsi Majoro and party secretary general Lebohang Hlaele.

Prof Mahao also accused Dr Majoro and Mr Hlaele of “reversing” the ABC’s national executive committee (NEC)’s “hard work” to rid itself of Mr Thabane by conniving to “deliver the ABC and government back to Makhoakhoeng”.  Makhoakhoeng is the home of Mr Thabane.

There is no love lost between Mr Thabane and Prof Mahao. This after the former premier fiercely fought to prevent Prof Mahao from becoming deputy leader after the ABC’s 2019 elective conference.

Prof Mahao prevailed at the ABC’s February 2019 elective conference after being backed by the party’s Koro-Koro constituency committee which had launched a successful High Court application to stop Mr Thabane and others from blocking his candidature.

Koro-Koro was therefore a fitting choice for Prof Mahao’s maiden rally as BAP leader on Sunday. A huge crowd of about 5000 people turned up in support of Prof Mahao who hails from the area. The locals were boosted by others who made the trip from Maseru and other parts of the country.

Addressing the boisterous crowd, Prof Mahao began by paying special tribute to the Koro-Koro constituency committee and legislator, Motebang Koma, for religiously standing by him during his turbulent time in the ABC and for joining him in the BAP.

He said BAP had come as a breath of fresh air to the majority of Basotho who had become apathetic and lost confidence in elections due to unfulfilled electoral promises by the successive governments which have ruled Lesotho.

He said statistics from the last elections in 2017 proved that 54 percent of the registered voters did not bother to cast their votes due to frustration with political parties.

“But as politicians kept on disappointing them, the numbers continued to fall and statistics show that only 46 percent of the electorate cast their votes in the 2017 elections. This shows that our democracy is weak because the majority of the eligible people have elected not to participate in elections and do not care who rules.

“This is because they believe that the political parties are all the same. Basotho are thirsty for salvation and the massive support the BAP has received is a clear indication to that desire for something different. The BAP is the answer.

“Which other party do you know that has amassed such massive support only three weeks after its formation? I have never seen such a thing. I must tell you that other parties are worried by our growth. They have to be worried because Basotho are saying the BAP is the last line of defence of the hopes of the nation.

“Studies have shown that half of Basotho are living in dire poverty. These are Basotho who don’t know where their next meal will come from. It is estimated that 120 000 youths, educated or not, are unemployed and don’t have any means of livelihood. Some of them are easily attracted to criminal activities as a means of survival,” Prof Mahao said.

He said Lesotho’s education system has been stagnant for many years and it is failing to respond to the current market needs to enable youths to survive through their qualifications.

“Lesotho is ranked high among countries with serious challenges of corruption. As if that is not bad enough, we recently witnessed the government tempering with a solid means of livelihood for wool and mohair farmers by giving a monopoly in the sector to Chinese national. This and other ruinous policies have all contributed to the loss of confidence in politics.

“Politics has turned into a ladder for politicians to create comfortable lives for themselves and their families while leaving the masses behind. We have to change this state of affairs. The BAP will certainly change this,” he said.

He added that BAP’s vision was anchored on the pillars of a clean government and fighting corruption at all costs. He said this would be achieved through a thorough vetting process to bar convicted criminals from contesting elections and being appointed to public office.

Commenting on the BAPO logo which features a man tilling the land with an ox-drawn plough, Prof Mahao said Lesotho should make use of its land and resources to create a productive and inclusive economy.

“The reason why Lesotho ranks among the poorest countries in the world is because we import everything we need. Yet God did not make a mistake when he created us to make a living out of the resources He gave us. As the BAP, we intend to change this state of affairs by ensuring that land is fully utilised to produce food for Basotho.

“BAP will support cooperatives whose members are predominately young people, we will make sure that Basotho benefit from their God-given resources by ensuring that taxpayers’ monies are used to grow the private sector, not to feed the politicians and bureaucrats in Maseru. One of the most perplexing things in this country are the salaries of senior officers at parastatals. Their astronomical salaries will shock you but the BAP will address that.

“Another thorny issue is that of tenders. Basotho are stealing from this country. There are no proper roads, electricity and water connections in our villages. There is high unemployment and this is all because some men and women are benefiting from these tenders without doing the job,” Prof Mahao said.

He cited an alleged case where an unnamed individual was paid millions to design the proposed Mafeteng Correctional Service building after a design by a civil servant from the Ministry of Public Works was rejected.

“A civil servant at the Ministry of Public Works came up with a plan but his proposal was thrown into a dustbin. Instead, the Ministry of Justice and Law called a white man without following tendering processes to design the Mafeteng Correctional Service building at a cost of M72 million. That money was shared among some politicians and the white man. But this country does not even have money to build that correctional service facility.

“Corruption is one of the main reasons for the huge gap between the rich and the poor. We have a team working on a policy document, clearly indicating how we are going to achieve all our targets. Once completed, we will call a special conference to approve the document as our bible which we will use to campaign for elections,” he said.

Prof Mahao also mocked Dr Majoro saying the premier needed divine help to fill up vacant cabinet posts after he and others were dismissed last month.

“As I conclude, there is one person whom I feel sorry for and I would like you to pray for him. Ntate Majoro needs prayers. For four weeks, he has been struggling to fill vacant cabinet positions. I told him that going to that place (Thabane’s home and fraternising with him) will come back to bite the ABC and affect the stability of this government. That is happening today,” Prof Mahao said.

The cabinet vacancies arose after Prof Mahao and others were fired in the aftermath of the formation of the BAP.

Dr Majoro fired Prof Mahao from his post as Justice and Law minister.   He was dismissed along with his allies, Motlatsi Maqelepo (Forestry, Range and Soil Conservation), ‘Mamoipone Senauoane (Police and Public Safety) and Deputy Minister of Health Nto Moakhi.

Mokhotlong legislator Tefo Mapesela was the first to be dismissed from his Agriculture, Marketing and Food Security portfolio last month. This after he had said Dr Majoro should finish his current term before stepping down to allow Prof Mahao to lead the ABC into the 2022 elections and take over as premier in the event of an ABC win.