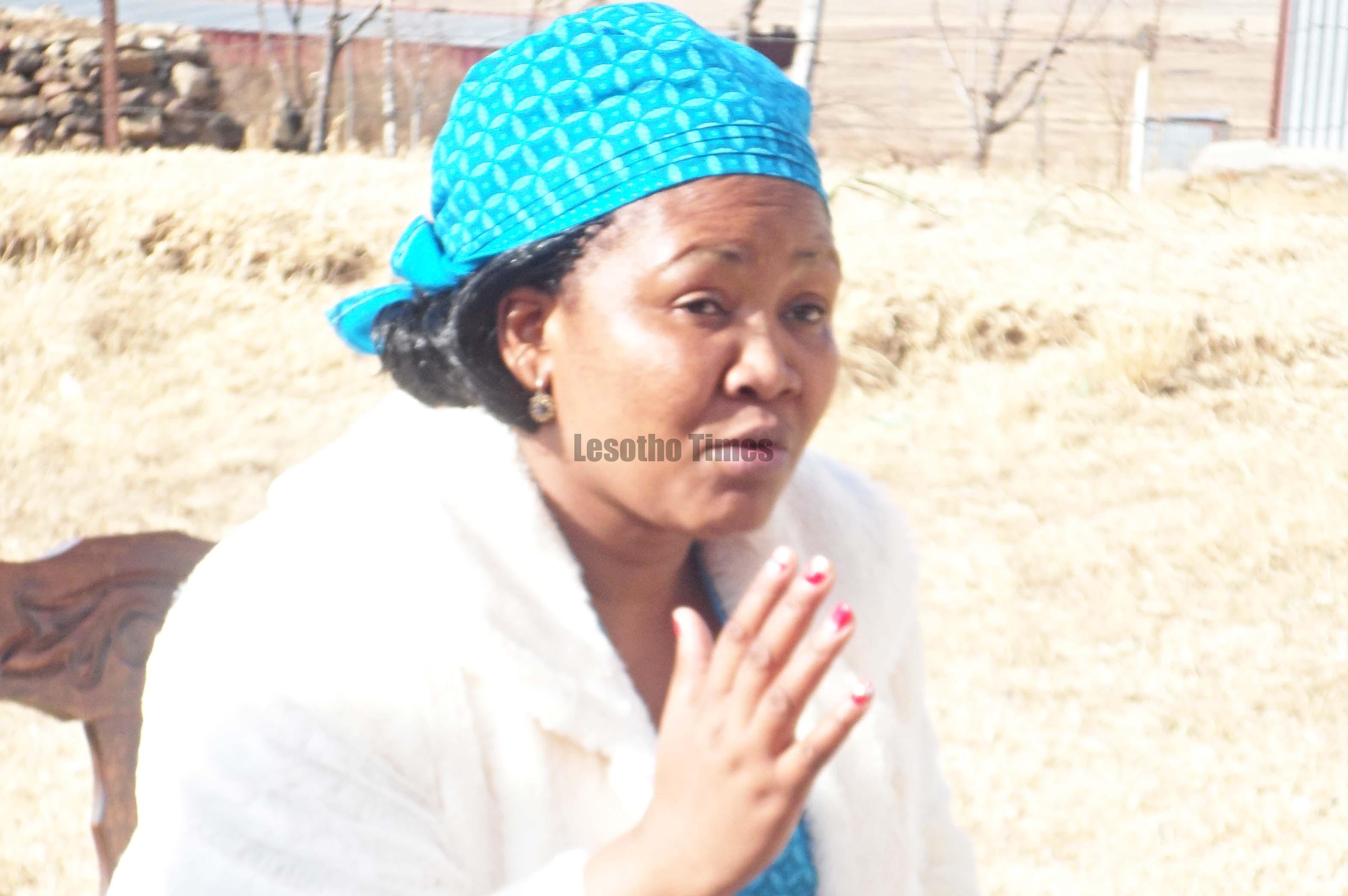 THE First Lady, ‘Maesaiah Thabane, was caught up in a physical altercation with a Ha Tšolo (Maseru) woman at Maseru Private Hospital last weekend. The First Lady’s office has nonetheless rejected information that she started the fight. Her alleged victim, ‘Manthatisi Mabuthile, nonetheless insist that she did.

Ms Mabuthile, is a sister to a woman who was hit by a vehicle that belongs to the office of the First Lady. The vehicle was transporting Ms Thabane’s office staff from a cancer awareness roadshow that had been held in Qacha’s Nek. The accident occurred in Ha Tšolo in Maseru on Saturday evening.

Ms Thabane had gone to the hospital to enquire about the condition of the accident victim when the altercation ensured with the victim’s sister.

The Office of the First Lady’s Public Relations Manager, Silas Monyatsi, yesterday confirmed the incident in an interview with the Lesotho Times.

Mr Monyatsi said Ms Thabane was involved in a “physical confrontation with one of the relatives of a woman that was hit by a vehicle” transporting employees of the First Lady’s Trust from a cancer awareness roadshow in Qacha’s Nek.

He however, dismissed reports that Ms Thabane started the fight and left the woman injured.

“The vehicle was transporting employees of the Office of the First Lady from Qacha’s Nek to Maseru and the driver hit a woman in Ha Tšolo in Maseru. It is reported that the woman and her companions, who were all drunk, walked into the road and the woman was hit by the car after she failed to run faster out of the road. She was rushed to Maseru Private Hospital and the driver reported the accident to the First Lady.”

Mr Monyatsi said upon learning of the accident, Ms Thabane rushed to the hospital to check on the victim and “probably” settle the hospital bill for the patient.

Mr Monyatsi further said that upon arrival at the hospital Ms Thabane asked the hospital staff why it took a long time for the patient to be attended to.  That question then trigged a confrontation between the First Lady and the relative of the patient, Ms Mabuthile.

“You know the situation (of delays) in our hospitals and like anybody else would do, she (Ms Thabane) asked why it had taken so long for the patient to be attended to. The patient’s relative asked who Mme First Lady was and ended up saying she (Ms Thabane) was a silly woman. Mme First Lady lost her temper and that is when a confrontation between the two took place. Ba ile ba tšoarana ka matsoho (They engaged in a fight).

“I was not there but I received a report that a hospital porter went to the two probably with the intention to separate them but Mme First Lady grabbed him by his clothes and in the process the clothes got torn,” Mr Monyatsi said.

Mr Monyatsi said Prime Minister Thomas Thabane got wind of the altercation and sent Water minister, Samonyane Ntsekele, to the hospital to diffuse the situation.

Ms Thabane and the hospital management eventually held a meeting and the misunderstanding was resolved with both parties apologising to each other.

“The meeting between the hospital officials and Mme First Lady went very well. The hospital management apologised to her and she also apologised and they made peace. As for the patient, she didn’t suffer serious injuries. She was just bruised and the last time I heard she was still in hospital.

“This issue only made news because Mme First Lady is a public figure and it has taken a totally wrong turn with some people making up stories. What I have told you is the honest truth as it has been narrated to me and there is no truth in allegations that Mme First Lady beat up the woman upon arrival at the hospital. She just asked why the patient had not been attended to and maybe the (patient’s relative) didn’t like her (Ms Thabane’s) approach or the tone she used,” Mr Monyatsi said.

However, Ms Mabuthile denied that she and her sister, the victim of the accident, were drunk when the latter was hit by the vehicle. Ms Mabuthile said Ms Thabane was “already in a foul mood and her temper was very high when she arrived at the hospital where my sister was admitted after being hit by the vehicle”.

She (Ms Thabane) asked why my sister had not been attended to and I responded by saying we had already been assisted and she immediately grabbed me saying ‘mosali, mosali, mosali ha ke buisoe ke mosali joalo’ (loosely translated to mean ‘woman, woman, woman no woman talks to me like this’).

“She (Ms Thabane) started beating me. She threw me to the floor and pulled me with the bonding on my head. When people tried to pull her away from me, I pleaded with them to make her stop pulling my hair because it was very painful,” Ms Mabuthile said.

She said when Ms Thabane finally stopped beating her, one of the nurses took her into a ward and asked her if she was aware that she had in fact been fighting with the First Lady.

“It was then that I learnt that she was the First Lady. The nurse told me to stay in the room and I hid under the table and only left the room after Mme First Lady left the hospital,” Ms Mabuthile added.

The incident comes in the aftermath of complaints by senior All Basotho Convention (ABC) officials like Mr Motlohi Maliehe, who have spoken out publicly, and others who haven’t, that Mrs Thabane’s aggressive behaviour threatens to derail support for the ABC and alienate most of the Prime Minister’s supporters.   They also accuse Mrs Thabane of exercising overbearing influence over the government and warn of the risk of her destroying her husband’s political career in the same way that Grace Mugabe, the wife of Robert Mugabe, did in Zimbabwe.  Mugabe lost support in his party and was subsequently pushed out in a vote of no confidence after Mrs Mugabe had gone on the rampage attacking and berating senior ruling party officials, among others.

It’s been an exciting transfer window

Commissioner Molibeli has failed and must go;…