The power of fish 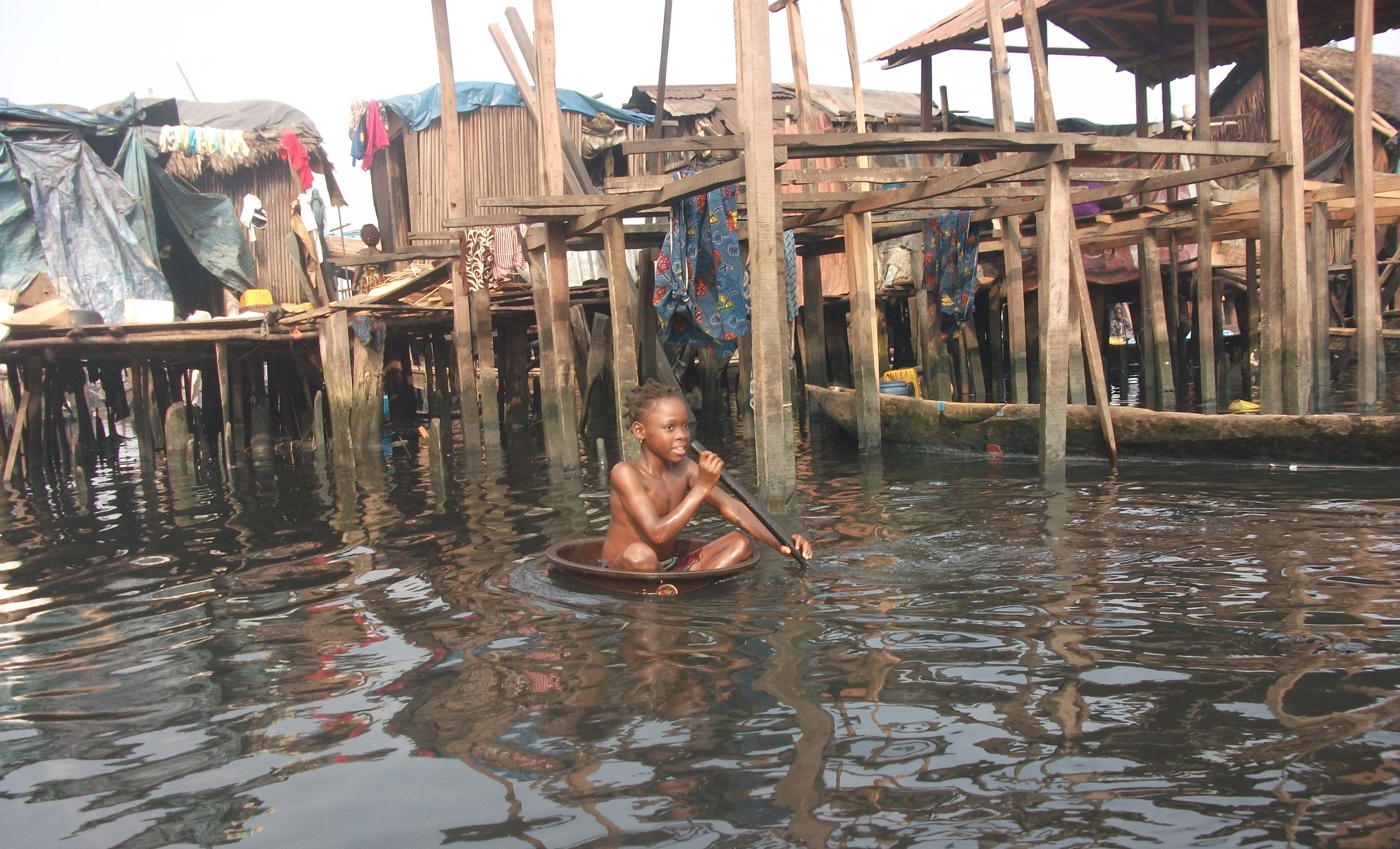 When the serious business of fish creates a floating slum

LAGOS – It never runs dry in Makoko—an informal settlement uniquely built on the stilts above the Lagos Lagoon. The floating slum, as it is called by many residents of Lagos, is home to more than 85 000 people whose livelihoods largely depend on selling fish.

Lagos is the former capital city of Nigeria and was replaced by Abuja, which 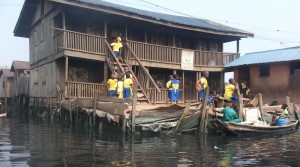 officially gained its status as the capital city on 12 December 1991.

However, life in Makoko is indeed strikingly different; dilapidated shacks, two schools, shops, a salon, taverns, a church—are all built on wooden platforms suspended above the water.

Children sell different foodstuffs ranging from sweets, biscuits, sugar and bread in floating canoe kiosks, adding to the uniqueness of this island settlement where movement from one place to the other is largely by wooden canoes.

On this particular visit to the settlement by the 20 finalists in the African Story Challenge, a few youngsters could be seen wading through the dirty water or swimming to the canoe kiosks to buy whatever they needed.

The African Story Challenge is the brainchild of the African Media Initiative, which is based in Kenya. It seeks to raise the standards and quality of journalism by promoting multimedia approaches and data journalism. The finalists in the Health Journalism Cycle are from 15 countries: Lesotho, Kenya, Zambia, Zimbabwe, Malawi, South Africa, Gambia, Ethiopia, Tanzania Swaziland, Nigeria, Togo, Ghana, Uganda and Mozambique. 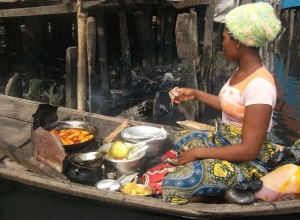 Nonetheless, during the tour of the settlement, an elderly female vendor could be seen frying some potatoes for sale on her floating kiosk located just next to her shack.

Just like many other women in many African countries, there is no difference between her streets of water and the ordinary lanes many vendors are used to.

Her fellow residents feel the same and cannot imagine any other life away from their beloved settlement, no-matter how haphazard and diseased the slum might appear. At times, they just enjoy riding in the canoes, going nowhere but to cool off the Lagos heat.

Here, it is another world indeed and the striking difference makes it difficult to imagine this community is part of other sophisticated parts of Lagos.

Yet, it appears the yawning gap between the very rich and very poor in Lagos is a common phenomenon that never raises eyebrows in this sprawling city of 21 million people.

Established at the turn of the 18th century primarily as a fishing village, Makoko has largely remained the same impoverished but bustling outpost  until today although the growing population has attracted other retail businesses over the years. A visitor might feel sorry for the residents due to the apparent dearth of basic amenities, yet these proud inhabitants would never trade the slum for anything else.

“I was born here, in 1958. This is my home, which I inherited from my forefathers. Nothing can take my family away from this place,” the area chief, Francis Agonyo said in an interview last week.

Agonyo is still bitter that in 2012, government destroyed dozens of homes in the settlement after giving the residents a 72-hour eviction notice.

A resident was reportedly killed during the demolition, which left many families homeless. Some of these families now sleep in canoes and are struggling to rebuild their lost homes.

Other residents interviewed fear the destruction might continue in order to redevelop the area which is now seen as a prime waterfront.

However, Agonyo blames the government for failing to provide basic facilities for the islanders, and insists it is by God’s grace that there have never been any major outbreaks of waterborne diseases.

The area is all but autonomous, with limited government presence and minimal health services provided by a private clinic.

“As you can see, the water is dirty but we do not drink it. We have safe borehole water which we transport to this place. We sometimes have a few cases of malaria, which is a problem everywhere in Nigeria. The challenge is accessing quality health services because there is no doctor at the clinic nearby,” Agonyo said.

Just a few metres away, children could be seen playing on the floating timber platforms and from time to time, they would relieve themselves in the water. There is virtually not enough space to allow the children to play freely—swimming or floating in large plastic containers are some of the innovations they have since come up with, to while-up the time.

Agonyo emphasised the need to upgrade the area and make the shacks safe.

“Many houses need renovation or to be demolished for new ones to be built. The water and wind shorten the lifespan of the structures. With much improvement, this area can become a tourist attraction,” Agonyo said.

Lack of sanitation facilities is also a major concern in Makoko.

“We use a different system of toilets, which allow us to collect the waste and keep it somewhere near the police station. The waste is later collected for treatment and disposal.”

However, the truth of the matter is sanitation on the lagoon is very poor as shown by the darkish colour of the polluted water and the unbearable stench pervading the settlement.

Some residents confessed they use tin-toilets and throw the waste into the same water their children swim and bath in.

Agonyo further explained there were rumors that the residents might be resettled elsewhere.

“With the help of human rights movements, we will resist that move. Our lives are here, we earn our livelihoods through fishing. If they force us to leave, how are we going to look after our children?” Agonyo, who has three wives and 18 children, said.

There are reports that years back, earlier residents did not support the resettlement plan away from the lagoon. As a result, the government had come up with the concept to re-organise the slum in a manner that would be sustainable and modern. This led to the debatable grand plan of creating a “Lagos Venice” around 2012.

Although government agents responsible of physical planning and urban planning had made efforts to develop the initiative, it seemed there were also challenges that might have derailed or slowing down the plan.
The costly challenges associated with cleaning-up the water, ensure provision of portable water and waste treatment plant amid the continued expansion of the slum, made the Venice concept complex.

However, back in Makoko another resident, Janet Ajonumape, 45, said although she still buys fish from local fishermen which she sells in various parts of Lagos, life has become difficult since the government demolished her home.

A mother of 10, it breaks Ajonumape’s heart to imagine a new life away from Makoko.

“I was born here and got married here. This is the only life I know,” she said.

Despite her own love for Makoko, Ajonumape continues to pray for a different life for her children, as uncertainty about the future persists.

“It is now very hard here because we lost our house. I am in the fish business and work hard to make sure my children get a decent education to stand a better chance for a brighter future.”

Every day, Ajonumape buys fish from fishermen, which she, in turn, cooks and sells to the people living around the lagoon from small open wooden canoes, unmindful of all the possible health implications.

With her canoe stuffed with smoked fish and other local delicacies, last week she was – within minutes – swamped by a group of shabbily dressed and near-naked children, who had come to buy goodies from her moving water food kiosk.

In the chaos to serve the anxious buyers was also the struggle to drive flies away that had invaded the selling point.

Flies are known sources of food contamination, carrying germs that cause all kinds of diarrheal diseases, including the killer cholera.

Away from the kiosk, one of the children, Ussa Johou, a Class Three pupil at Adekule Primary School, played football with his friends on a tiny pitch.

It is clear that life has not been easy for the many children living in Makoko.

Despite their tender age, the children are well aware that they are poor and their chance only lies in getting a good education, which many are failing to access.

That is why breaking the vicious cycle that bogged their parents in Makoko could prove tough for children like Ussa.

“My father does odd jobs and my mother sells fish. It is always difficult for them to raise enough money for our food, clothes and school-fees,” Ussa said.

The oil-rich Nigeria is Africa’s most populous country with the current population at 170 million people.

Lagos is a port and the most populous city in Nigeria, the second fastest-growing in Africa and seventh in the world. In Nigeria, challenges associated with managing a huge population come in several forms, ranging from unemployment, poor family planning strategies and the struggle to stretch resources and infrastructure to all communities.

The city has a serious energy shortage with massive electricity cuts, which have become a normal way of life. However, Nigerians also show a lot of resilience in so many ways. Their eagerness to start and run their own businesses boosts employment creation and has significantly contributed to the competitiveness of the economy.

Despite weak infrastructure development in some areas, individual households have taken to developing their own water-harvesting and electricity generation systems. Nigerians also take agriculture seriously as seen by the government’s huge support of the sector and massive production of cereals such as rice. Many Nigerians might not enjoy some luxuries but only a few families go to bed on empty stomachs.

“Disability took me out of the classroom, buried my dreams”