Zimbabwean President Robert Mugabe might not attend an EU-Africa summit next week because his wife has been refused a visa to go with him, officials in Harare have said.

Mr Mugabe, 90, and his wife Grace are subject to travel bans by the EU because of alleged human rights abuses and election-rigging.

Harare on Friday urged other African Union members to shun the summit.

But diplomats in Brussels say they are unfazed by the boycott call.

Mr Mugabe’s spokesman George Charamba said the president would not be there if the EU “continues to hold out” on the issue of Mrs Mugabe’s visa.

The travel ban on Mr Mugabe and his wife can be suspended temporarily to allow him to attend international forums.

But EU officials say no presidential spouses will be invited to the 2-3 April summit. 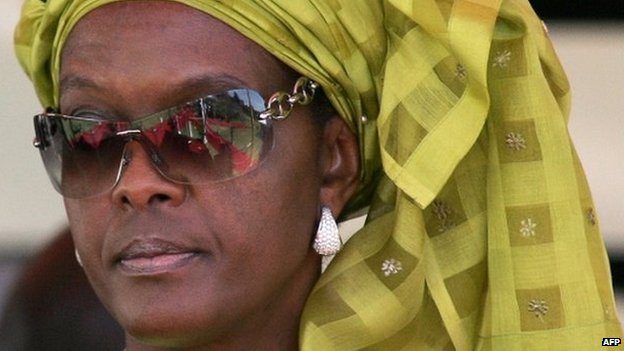 Grace Mugabe is subject to a travel ban, but it can be lifted for international conferences

Aldo Dell’Ariccia, the EU’s envoy to Harare, told a local radio station on Friday the bloc had not given a visa to Mrs Mugabe because there was no programme for wives of presidents and there was no need for her to attend.

“What God has put together the EU is trying to separate,” Mr Charamba said in the state-controlled Herald newspaper.

“Do they expect the president to respect the EU and disrespect his own marriage?”

Zimbabwe is also unhappy that Sudan has not been invited to the gathering, especially when Egypt – which has been suspended from the African Union (AU) – has been asked.

The gathering brings together 90 countries from Europe and Africa, including 65 heads of state and government.

Circumcision not only way to combat Aids

Obama: Russia must pull back troops from Ukraine border