Unlike The Gambia’s Jammeh, Mugabe may not disappear 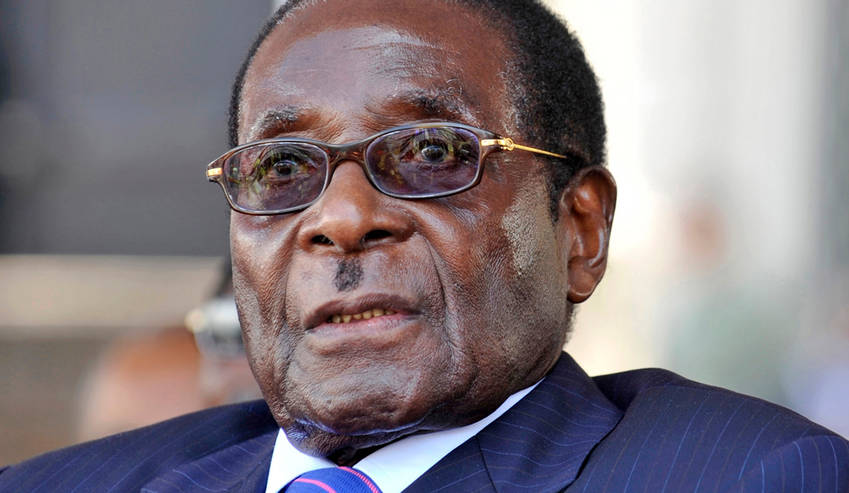 In the central lobby of the Banjul International Airport, a painting of Yahya Jammeh, the former president of The Gambia, adorns the ceiling. Jammeh, in his characteristic white, free-flowing kaftan, is shown with his arms wide open; a Qur’an in one hand and a short staff in another.

It’s been almost a year since Jammeh lost the presidential elections that pushed him into exile in Equatorial Guinea, and yet, here he was, still looking down on us. Indeed, I consider it a rather wicked twist of fate that I found myself in southern Senegal and then in The Gambia when the action began in Zimbabwe last week.

I would have been one of the many journalists from southern and eastern Africa making my way to Harare – to report on the coup and the “fall” of Robert Mugabe. But here I was, some 9 500km away, looking at an airport ceiling. But being in The Gambia oddly enough, gave me a rather apt vantage point into reading the events playing out in Harare.

Jammeh, in power for 22 years. Lost the presidential election on December 1. He conceded defeat, then rescinded on his decision.

It took international condemnation, multilateral diplomacy and ultimately troops from the Economic Community of West African States (Ecowas) to enter the country to convince him otherwise. Jammeh subsequently gave up and fled.

Today, The Gambia is optimistic; journalists talk freely about a time in which they could not talk at all, traders and taxi drivers say they feel more relaxed and experimental, tour operators say they look forward to a lucrative December tourism season.

And yet materially, not much has changed. The Gambia has the same economic limitations, the police still wear flip flops and ask for lifts because of a shortage of police resources. Jobs are scarce and thousands are still trying their luck on the “Back Way” to Europe.

Gambia’s President Yahya Jammeh shows his inked finger before voting in Banjul, Gambia in December 2016. Jammeh took power in 1994 in a bloodless coup, ruling the tiny West African nation for more than 22 years. His regime was accused of overseeing human rights abuses to silence opponents.

Democracy, for now, means little more than being hopeful after Jammeh. There is still no word of justice for the crimes committed by the regime. The secret service, responsible for torture and arbitrary arrest, has merely changed tracks. Naturally these are issues, if left unresolved, will come back to haunt; which made me think about the events in Zimbabwe.

Both Jammeh and Mugabe played an instrumental role in the lives of so many people; as larger than life personalities, they absorbed time, empathy and instilled fear and drew tremendous loyalty from ordinary people.

They both leave behind mixed legacies that at times are fringe lunacy: Mugabe built a tremendous public school system but then suffocated education and opportunity, Jammeh banned female genital mutilation (FGM) and was seen as progressive when it came to gender issues, but then touted herbal medication for Aids and threatened to slit the throats of gays.

Despite there being a political makeover in The Gambia, there are anxieties that cannot be whisked away overnight. Barrow would know well: African governments are riddled with former leaders pulling strings from an outside line.

Just last week, the AFP news agency reported that a dozen Gambian soldiers were being held, some for a matter of months, without charge, in direct contravention of the constitution. The soldiers were suspected of plotting a mutiny.

I am not for an instance suggesting that the story in Zimbabwe and The Gambia is the same.

The circumstances, too, are different, but this is precisely what makes me nervous.

Jammeh never had a mental grip on Gambians in quite the same way Mugabe did.

Jammeh was towering, but not infallible. Unlike Mugabe, seen as the ultimate patriarch and as a liberation hero, Jammeh was in no way credited for the independence of the country. In other words, few felt indebted to Jammeh. Mugabe still enjoys support and respect as can be seen by the conduct and approach of the army generals.

Moreover, when it came to support, Jammeh had few friends in the West African region. He was seen as a liability, a stain on their collective aspirations as a bloc.

In contrast, SADC has always protected Mugabe and it’s too late to change their minds. So whereas it was the West African community who acted on behalf of the people, there will be no such thing in Zimbabwe. Here, the neighbourhood is complicit in his crimes.

And then, there is the kicker.

This change of heart is a difficult pill to swallow. This is the same army that stood by Mugabe during the many times he hurt his own people. This is the same military that blocked the work of activists and opposition leaders from standing up to him. The army cannot be trusted because it is acting on its own interests, not the citizens’ interests. It missed that boat a long time back.

For those Zimbabweans urging the sceptics among us to “allow us our day in the sun”, I ask them to look at the deals being made in the shadows as they celebrate. Lest, you look up a year later, and find him still staring down at you.

* Essa is a journalist at Al Jazeera. He is also co-founder of The Daily Vox. He reported from The Gambia on a fellowship with the International Reporting Project (IRP)

SADC deployment should not be delayed anymore