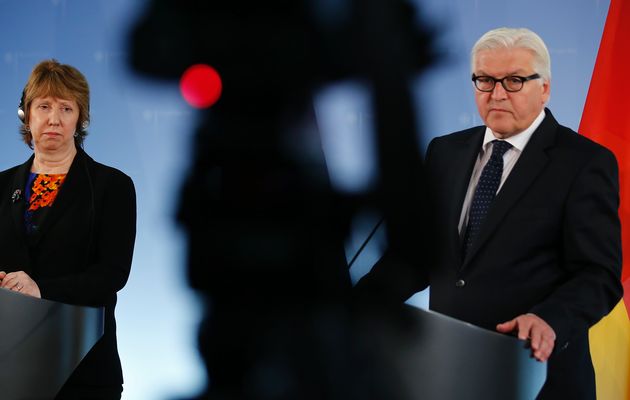 Pro-Moscow rebels fighting in east Ukraine vowed Thursday to press on with disputed independence referendums, defying a call from President Vladimir Putin to postpone the vote in a bid to ease tensions.

“The vote will happen on May 11,” the leader of the self-proclaimed People’s Republic of Donetsk, Denis Pushilin, declared to reporters.

There were fears that Ukraine could still erupt in fresh violence on Friday when both it and Russia celebrate the Soviet victory in World War II.

There were some reports that Putin could make a triumphant entry into Crimea, which was annexed by Russia from Ukraine in March.

German Chancellor Angela Merkel voiced her concern to Putin about this possibility, her Foreign Minister Frank-Walter Steinmeier said Thursday. “He left the answer open about whether he would personally attend”.

The Cold War-style tension was ratcheted up another notch on Thursday as Russia conducted military drills, including test-firing ballistic missiles, and said Ukraine would now have to prepay for its crucial gas imports.

A display of tanks, missile systems and fighter jets on Red Square Friday will help mark the WWII victory over the Nazis.

Pushilin said Thursday, to applause from members of the “republic’s” ruling council, that “the people’s desire to hold the referendum is becoming even greater.”

On Sunday, people in the restive eastern region will be called to answer one simple question: “Do you support the declaration of independence by the Donetsk People’s Republic?”

Insurgents in the other main rebel-held towns of Slavyansk and Lugansk also declared they would hold a plebiscite.

The European Union, whose foreign ministers meet on Monday to consider further sanctions against Russia, said the referendums “could have no democratic legitimacy and would only further worsen the situation”.

The referendum move dashed hopes of diffusing the crisis after Putin on Wednesday made a surprise call to the rebels to postpone their plebiscites.

In a stunning about-face, the Kremlin strongman also backed a presidential election planned by Kiev’s interim leaders on May 25 that Moscow had only recently described as “absurd”.

Putin had previously said that Kiev must cease its military operations in the east in return for Moscow’s backing of the May 25 election.

But on Thursday, Kiev vowed to press forward with what it calls an “anti-terrorist” operation against insurgents holding a dozen or so towns and cities in the east.

“The counterterrorist operation will go on regardless of any decisions by any subversive or terrorist groups in the Donetsk region,” Andriy Parubiy, secretary of Ukraine’s national security and defence council, told reporters.

Prime Minister Arseniy Yatsenyuk said in a speech marking the Soviet victory against Nazi Germany that the former Soviet republic was facing “a real albeit undeclared war”.

Putin had also said Wednesday after his meeting with OSCE chair and Swiss President Didier Burkhalter that Russia had withdrawn its estimated 40,000 troops from the Ukrainian border.

But NATO Secretary-General Anders Fogh Rasmussen told reporters in Warsaw he had yet to see “any indications” that Russia had actually done so.

As diplomatic efforts intensified to defuse the worst crisis between Moscow and the West since the Cold War, the secretary general of the OSCE flew into Kiev to continue mediation.

But the Ukrainian foreign ministry issued a statement saying Putin’s call to push back the referendums was “just a mockery and by no means a sign of goodwill” because the votes were illegal.

Ukraine has lost 14 troops and three helicopter gunships with 66 servicemen injured in the assault on the rebels. The fighting has also claimed the lives of more than 30 on the insurgent side.

The majority of the fighting has taken place around the town of Slavyansk.

Clashes that resulted in a horrific inferno in the southern port city of Odessa last week claimed another 42 lives, most of them pro-Russian activists, pushing the death toll over the past week to nearly 90.

The violence has prompted many Western politicians to warn that the country of 46 million people is slipping towards a civil war that would imperil peace in Europe.

The unrest also shattered a peace deal struck in Geneva on April 17 that called for the insurgents to lay down their arms.

But politicians have stressed that diplomacy is still the preferred way to solve the crisis and Putin has accepted an invitation from French President Francois Hollande to attend D-Day celebrations in June.

US President Barack Obama, who will not meet Putin one-on-one at the commemoration, vowed to step up his sanctions against whole areas of the recession-threatened Russian economy.

Germany, and Europe as a whole, face the prospect of imminent energy shortages after Russia ordered crisis-hit Ukraine to pay upfront for all its natural gas deliveries.

The largely-anticipated announcement imperils supplies to a large swathe of the European Union because nearly 15 percent of all Russian gas consumed by the 28-nation bloc transits through Ukraine.