Tšepong workers set to down tools 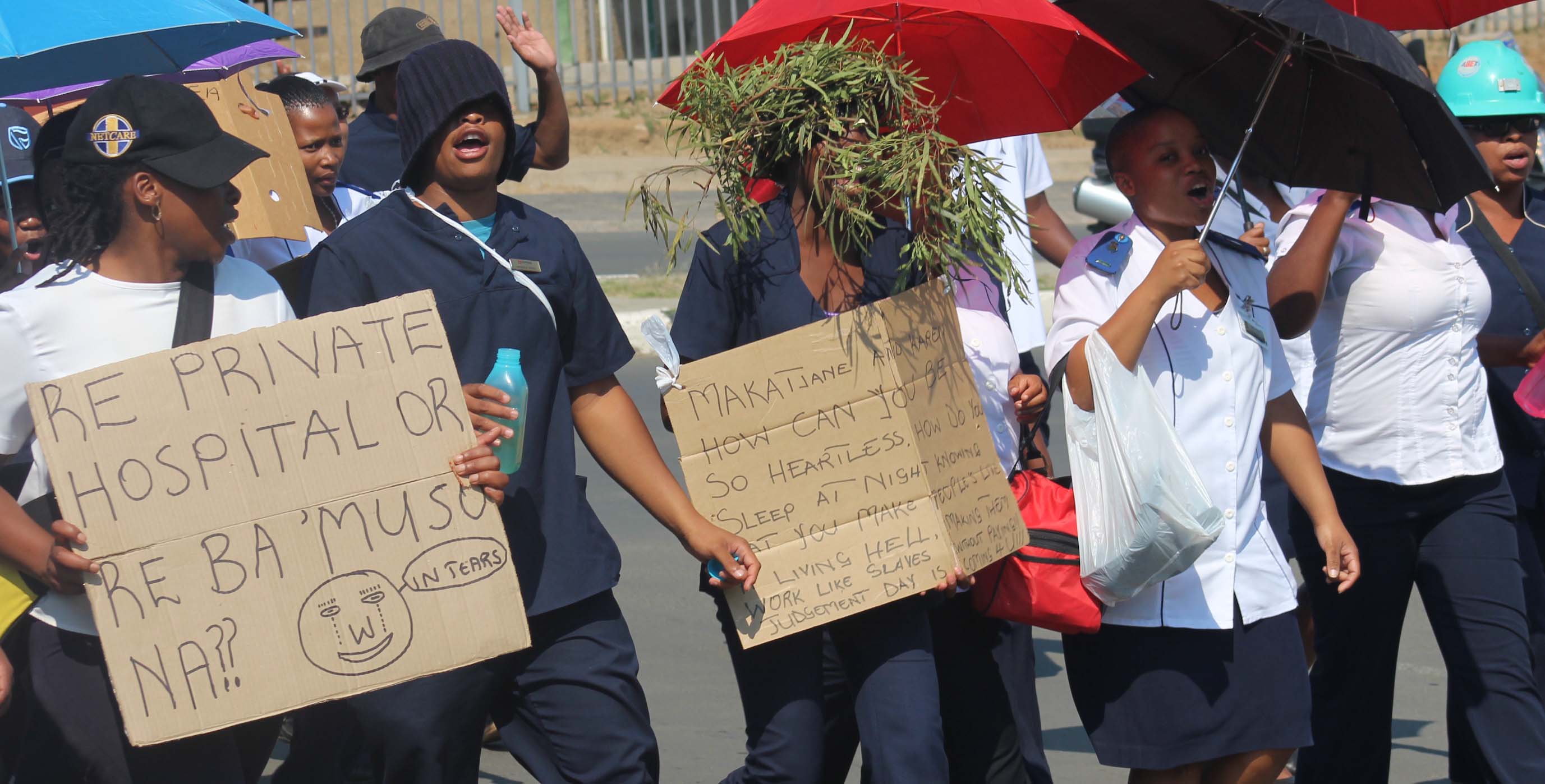 Queen ‘Mamohato Memorial Hospital workers will embark on an indefinite strike on Monday next week after wage-negotiations deadlocked and relations with management soured over a number of issues.
More than half of the hospital’s 840 workers are set to picket the state-of-the-art referral hospital on Monday, according to the Lesotho Workers Association (LEWA) national organiser, Advocate Paul Sesinyi.

The Lesotho Times has established that the workers, who include doctors, nurses and other healthcare staff, have rejected a four percent salary increase offer and are, instead, demanding a complete overhaul of the hospital’s wage structure.

Correspondence between LEWA and the Tšepong consortium managing the hospital, points to a relationship that has irretrievably broken down, with neither party prepared to compromise on an entrenched, hardline stance.

The last time the two parties met was on April 11, but following yet another deadlock, LEWA had a meeting with Health minister Pinkie Manamolela on Tuesday this week, in which she reportedly said the workers’ concerns were being looked into.

But Sesinyi said the minister’s response was unconvincing as the wage-dispute, in particular, has been ongoing since early last year, with no end in sight to the dispute.
Sesinyi further said what angered the workers even more was the meeting with Manamolela dwelled “so much” on allegations that the pending industrial action would be extremely violent, and not the workers’ grievances amid her promise to resolve the stalemate and also engage auditors who would audit Tsepong’s financial position.

“What seemed to have caused the meeting we had with the Minister to focus on the alleged violent strike was a letter written by the Tšepong’s Operations Director, Dr Karen Prins, dated April 17, 2014,” said Sesinyi.

According to the letter, a copy of which the Lesotho Times managed to obtain, Prins expresses management’s fears about the potential damage of the strike.

Part of the letter, which Prins addressed to Sesinyi “to bring certain concerns to your attention”, reads: “Tšepong (Pty) Ltd and LEWA are currently engaged in wage-negotiations, whereby the last meeting was held on 11 April 2014. The union has rejected the company’s most recent offer.
“Tsepong management also attempted to clarify the rumour of anticipated industrial action on 28 April and LEWA officials did not deny such action. They only responded, with concern, that when employees feel they have exhausted all avenues, then there is no alternative remedy for them but to use action.
“LEWA attended a COSATU (Congress of South African Trade Unions) session in South Africa and they would not hope for action similar to Marikana (a wildcat strike at Lonmin mine in South Africa on 16 August 2012, which resulted in the death of 44 people, the majority of whom were striking mineworkers).to take place at Tšepong.
“It was later confirmed during subsequent interaction with general staff members that LEWA incited the members during their last meeting by discussing the Marikana incident.
“Some members confirmed this incident is already arranged and people will be violently prevented from working, property will be severely damaged and even patients might be harmed as a result of this planned action”.

But in response, Sesinyi reminded Prins of the deadlocked negotiations which he said were the reason behind the impending strike.
“It is common cause that LEWA rejected the company’s offer, which you have failed to justify. Perhaps it is convenient, at this stage, to remind you that Tšepong employees are not government employees,” wrote Sesinyi to Prins on Tuesday this week.
“It is, therefore, difficult for us to understand why you would make a reference to the government increase of four percent (which civil servants were offered for the 2014/15 financial year) as your counter-offer, when you have consistently refused to restructure your employees’ salaries.
“It is not correct for you to say that we did not deny the rumour of the anticipated industrial action. Clearly you were misled by those who gave you this report.
“We also categorically deny that any of us ever attended any COSATU session in South Africa and you have to prove this point. Secondly, you need to understand the context within which the Marikana issue was raised.
“We also deny that LEWA ever incited any members to do anything, let alone discussing the Marikana incident.”
Contacted about the looming strike, the hospital’s Public Relations Officer, Limpho Seeiso said: “We wrote the letter to LEWA because we had heard rumours that there was going to be a strike since they (LEWA) haven’t notified us of any strike.
“So when we heard these rumours, we notified the relevant security authorities that there might be a violent strike so that they will be on guard in case it happens.
“We have also notified members of the public that they should delay their consultation or consult nearby clinics and hospitals for their safety during the duration of the strike. Only people who have emergencies may come to the hospital as we are not even sure how many people will go on strike. When we get more information we will keep on updating the public”.
Minister Manamolela yesterday also confirmed meeting with LEWA officials.

“We had a cordial meeting and we seemed to understand each other. I’m surprised that after our long discussion, the same people still decide to continue with the strike,” said Manamolela.
“It’s very sad because I’m committed to finding solutions to these issues. I am 100 percent involved because I can see that this is a big issue and I want it resolved once and for all.
“But if the workers have decided to go on strike, let them do so because they will be exercising their right.
“I’m always thinking about this Tšepong issue wherever I am, day and night; that’s how seriously I am taking it.”