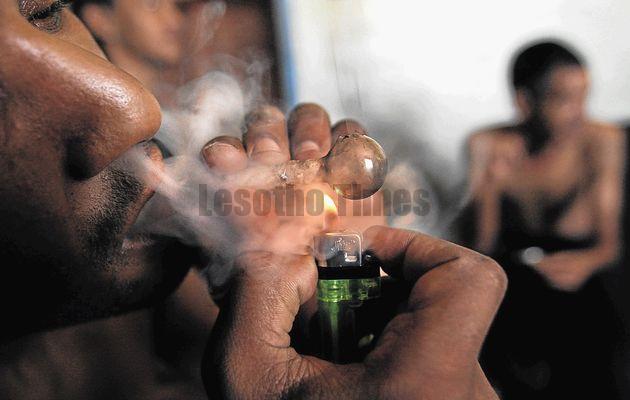 THE police in Ha Thetsane have declared war on drug peddling syndicates which they say have significantly contributed to the increase in criminal activities in the community.

The officer commanding Thetsane Police Station, Senior Inspector Matlotlo Mphōhla, told this publication this week that they are on the hunt for groups and individuals who are peddling drugs in the area.

Snr Inspector Mphōhla said illegal drug use was rampant in the Thetsane area and this has resulted into an increase in criminal activities.

“There is serious abuse of drugs ranging from dagga, mandrax (methaqualone) and cocaine among young people in the Thetsane area,” Snr Inspector Mphōhla said.

“There is also an increase in the abuse of alcohol. Just this morning (Tuesday) we had an operation and we recovered a bagful of dagga in an abandoned house in the area.”

He said drug peddlers and users have devised a communication code where they use colours of shoes to deliver certain messages.

“We have learnt that the drug dealers have devised a communication strategy where they hang different colours of worn-out tennis shoes to signal the availability of certain drugs. We however, are not yet familiar with what colour of shoes represents which drug.”

Snr Inspector Mphōhla said the widespread drug use has resulted in an upsurge of other criminal activities that involve armed robberies, house breaking, rape and murder.

“Under the influence of these drugs, the users now get into other criminal activities like armed robbery, house breaking and rape. There have also been incidences of murder which were linked to excessive use of alcohol and other drugs, especially dagga. There is no doubt that these crimes are committed under the influence of drugs,” Snr Inspector Mphōhla said.

“Young people are consuming alcohol at an alarming rate. They drink all night in their so-called sit-ins (social gatherings) and in clubs and then drive around in their intoxicated, fatigued state which results into avoidable accidents and deaths,” he said.

Snr Inspector Mphōhla said that there have been unconfirmed reports that foreigners from other African countries were the suppliers of some of the drugs.

“We have heard that some of the suppliers of these drugs are foreigners from other African countries,” Senior Inspector Mphōhla said.

He said the police have now lined up operations to search for illegal drugs and to also drive out criminals from their hideouts, among them-abandoned houses.

“There are a lot of abandoned houses in the Thetsena area which the criminals use as their hideouts and we are conducting operations to drive them out. We have even engaged the chiefs from surrounding villages to call on owners of the abandoned houses to rehabilitated them and upgrade their security. We want to implement sound control measures to try all means possible to eliminate criminal activities.

“We have even asked the chiefs to request that people who wish to rent houses in the Thetsane area produce proof of residence from their places of origin and to also produce police clearance that proves that they have never engaged in criminal activities.

“We want to use all possible means to eradicate crime in this area. Ha Thetsane is a very challenging area because it has a high concentration of people due to the textile industries. It is important therefore that we fight crime as best as we can,” Snr Inspector Mphōhla said.

He said that the police have also enrolled several young people from the area into recreational activities that include choir and sports to keep them away from idling on the streets. He however, could not immediately provide the statistics of the youths whom they have worked with.

Snr Inspector Mphōhla also expressed gratitude to the business community in the Thetsane area for their support in providing resources for the police.