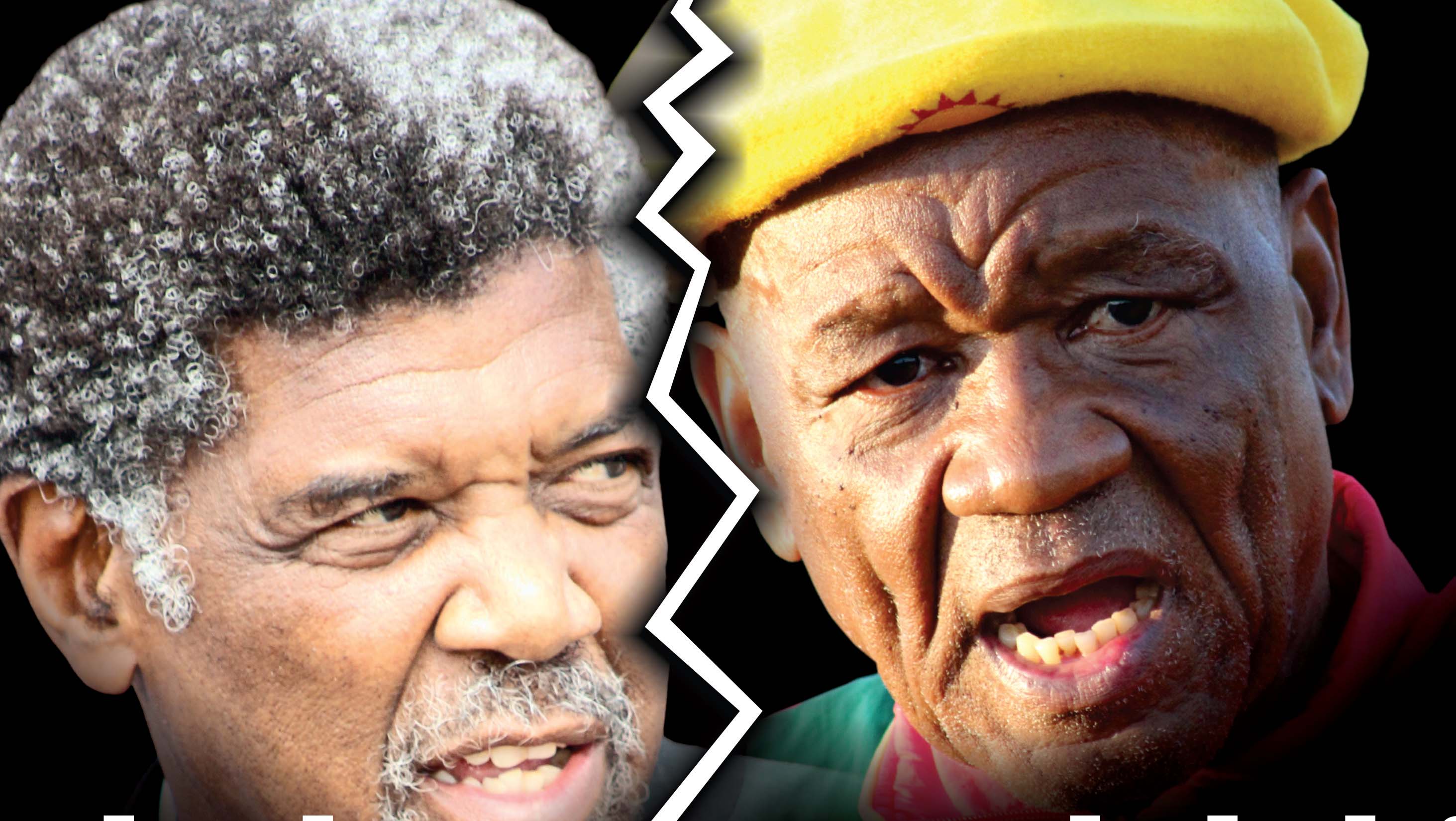 A MOOTED coalition pact between Thomas Thabane and Monyake Moleleki stalled over a disagreement about who between them becomes prime minister if the two political veterans had joined forces to oust current premier Pakalitha Mosisili.

Dr Thabane is the leader of the main opposition All Basotho Convention (ABC) while Mr Monyake is the deputy leader of the Democratic Congress (DC). Mr Monyake, who is also Police minister, leads a DC faction dubbed Lirurubele (butterflies), comprising of about 23 of the party’s members of parliament (MPs).

After thorough investigations, the Lesotho Times can reveal there had been extensive interactions between Dr Thabane and Mr Monyake’s Lirurubele faction in the DC before parliament opened last Friday.

We can also reveal that if Dr Thabane had agreed with Mr Moleleki’s proposal for the latter to become prime minister and the ABC leader to be the deputy, a no-confidence motion against Dr Mosisili would most probably have been launched earlier this week. But the no-confidence motion, which had been highly speculated about, could not happen because of Dr Thabane and Mr Moleleki’s failure to reach agreement on who becomes prime minister.

Sources said Dr Thabane had been adamant that he could not be deputy to Mr Moleleki.  Yet Mr Moleleki’s fight within the DC, on the other hand, is about him becoming prime minister. He thus saw no reason for settling for second best after all the fights he has been enmeshed in within his DC, political leaders in the know said.

“Politics is all about numbers and Thabane has the numbers. If his unofficial pact with the BNP (Basotho National Party) is brought into the equation, then Thabane would bring in at least 53 MPs onto the table minus (deputy leader Tlali) Khasu,” said a highly placed political leader who requested anonymity.

“Moleleki could only have brought in at least 20 MPs who appeared to be solidly behind him.  It therefore did not make sense that he becomes prime minister and the man with the most numbers (becomes) the deputy even though their two groups would have constituted a comfortable majority.

“As I have said, politics is about numbers and the more you have, the more you are qualified to sit on the uppermost pedestal. The question of who becomes premier became the only obstacle to getting what would have become another political earthquake on our political landscape,” the source added.

The Lesotho Times has information about the details of the recent interactions between Dr Thabane and Mr Moleleki’s faction but cannot release these to protect our sources.

Despite the lower numbers of MPs he would have brought onto the table, Mr Moleleki had advanced many reasons of why he wanted to be premier, the sources said. Chief among them was the creation of his own legacy as a veteran of Lesotho’s politics and the pension benefits that come with having been premier to safeguard his and his family’s future. Because of his long history in Lesotho’s politics, the sources said, Mr Moleleki believed it would be unbefitting of his legacy if he died without having been premier.

He nevertheless saw the window of that happening narrowing fast, due to a combination of his advancing years and the ill health that has dogged him in the past. Mr Moleleki (65) has received treatment for tonsillar cancer in the past few years.

Dr Thabane on the other hand insisted he was the man who must become prime minister by his sheer huge numbers. While the ABC leader had been willing to cede significant ministries to Mr Moleleki, he was not willing to compromise on the premier’s position.

“In any coalition arrangement, it’s the biggest party that gets the prime minister’s position. That is basic common sense.  Just consider the absurdity that would result if (Mothetjoa) Metsing was the prime minister in the current coalition when he has about a dozen seats and the DC has 46,” said a political leader involved in the discussions.

“ABC supporters won’t accept any arrangement in which their party becomes wholly subjugated to a faction of the DC with Thabane as a deputy.”

Dr Thabane also believes he has nothing to lose at the moment if he does not return to power whereas the odds might get increasingly staked against Mr Moleleki as the implosion of the DC seems to continue in earnest with senior party officials continuing their public spatting.

“Thabane is not impatient to wait for whenever the next elections will be held and then return to office. He believes he will sweep the electoral map because of the sympathy his party has garnered through a host of issues like the killing of (Maaparankoe) Mahao (former army commander) and the grave economic repercussions for Lesotho if this government keeps on dragging its feet on implementing SADC’s recommended reforms and (Tlali) Kamoli remains at the army resulting in the likely exclusion of Lesotho from facilities like AGOA (African Growth and Opportunity Act),” said one official.

AGOA gives duty-free and quota-free access to the United States market to eligible Sub-Saharan African countries including Lesotho. The US has expressed “serious concerns” about the government’s alleged failure to adhere to AGOA governance criteria, saying it would monitor the implementation of reforms ahead of the next eligibility review process.

The politicians interviewed said the ball was now squarely in Mr Moleleki’s court. The much talked about no-confidence vote process, that would have been attempted this week, after the 7 October 2016 re-opening of Parliament, was abandoned because of this Thabane-Moleleki gridlock, they said.

The sources said Mr Moleleki was also loath to becoming Dr Thabane’s deputy because of fears he would not work well with the ABC leader if he is the top man.  Dr Thabane’s coalition with the Lesotho Congress for Democracy (LCD) unraveled because the party’s leader, Mr Metsing, accused Dr Thabane of acting unilaterally.

But officials who want Mr Moleleki to join forces with Dr Thabane said this was no longer likely. Mr Moleleki could secure himself by negotiating certain specific powers for himself and taking key ministries.  Lessons had also been learnt from the unravelling of the Thabane/Metsing pact that Dr Thabane himself would do all he could to avoid a repeat if he were to come back to power.

Firstly, he could still reconsider his position and join forces with Dr Thabane in a pact in which he becomes the deputy prime minister, a significant position he still has never held.  He then can negotiate specific higher powers for this office.  Sources said a Thabane/Moleleki government remained a real possibility even in the event of fresh elections as the ABC was expected to sweep through its urban strongholds, while Lirurubele members would then only need to retain or increase their seats.

Secondly, he can stay in the DC and fight to become prime minister from within the DC by seeking Dr Mosisili’s ouster. The DC has since resolved at its weekend conference that in the event of a no-confidence motion against Dr Mosisili, the Prime Minister should dissolve Parliament and call for fresh elections. That could pave a way for Mr Moleleki to manoeuvre into the leadership as a no-confidence motion could badly affect Dr Mosisili’s credibility.

Thirdly, Mr Moleleki can accept the status quo, drop his ambitions for higher office and reconcile with Dr Mosisili by renouncing his tough stance against his own government’s decision to controversially award a vehicle fleet contract to Bidvest Bank Limited, among other issues on which Mr Moleleki has differed with his leader.  After reconciliation, Mr Moleleki can then expect Dr Mosisili to pave the road for the Police minister to succeed the premier.

“As you have seen, the bloodletting in DC has reached a point of no return. Senior party hacks are attacking each other in public. Both lilurubele and lithope are digging in their heels. Members of Mosisili’s lithope are now determined more than ever before to thwart Moleleki from ever becoming DC leader, preferring instead to prepare someone else, in the event that Mosisili opts out.

“Lithope will also fight to ensure that Moleleki does not even return as deputy party leader at either a special or scheduled elective conference. They will seek to replace him with someone like (International Relations Minister Tlohang) Sekhamane for the deputy’s post if Mosisili opts to stay as leader,” the source said.

“Your paper carried a story quoting Moleleki as saying that his teammates could even kill him. In Lesotho’s highly fractious politics, that means a lot. It seems we have not seen anything yet…”

However, the DC’s Deputy Secretary-General Refiloe Litjobo publicly lambasted Mr Qoo, saying he was no longer taking his mandate from the party, but always making statements contradicting the DC’s National Executive Committee resolutions.

Sources said a political compromise between lirurubele and lithope now appeared impossible because of the vested interests of each faction’s members.

Addressing his party’s annual conference last Saturday, Dr Mosisili was open about the ructions in his party saying he was aware of a plot to pass a no-confidence vote against him.

He said people who were pushing for a no-confidence vote against him and the seven party coalition government “knew nothing” about parliamentary procedures.

Dr Mosisili said it would be difficult for the no-confidence vote to pass because it depended to a large extent on the decisions the incumbent prime minister would make.

But in the end political leaders interviewed said a prime minister could not permanently forestall a process to oust him if he has lost a majority in Parliament.

One political leader also described as “legally problematic”, the DC’s resolution that Parliament be dissolved and fresh elections be called in the event of a no-confidence motion against Dr Mosisili.

“A political party resolution cannot circumvent the country’s laws and the will of the majority.

“If for instance the ABC gangs up with lirurubele to pass a vote of no confidence in Mosisili and it can be demonstrated that there is another leader with a new majority in Parliament, the King should invite that leader to form the government….. It would be cowardly for Mosisili to dissolve parliament in that instance just as it was cowardly for Thabane to prorogue Parliament in 2014”.

It nevertheless seems that Dr Thabane and Mr Moleleki’s failure to reach agreement might either have saved Dr Mosisili personally and the country from another round of instability arising from whatever would have transpired in Parliament. At least for now.

But political leaders interviewed are insistent that Mr Moleleki’s ambitions for higher office remain hinged on him reaching some sort of agreement with Dr Thabane, unless Mr Moleleki succeeded in toppling Dr Mosisili within the DC. However, fears by many MPs about whether or not they can retain their posts, if any no confidence vote indeed results in fresh elections, could also strengthen Dr Mosisili’s hand and forestall such a motion for the time being.