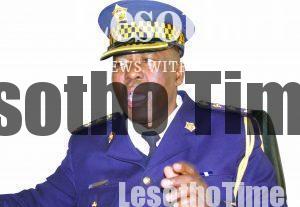 MASERU — A high school teacher was shot dead in front of his students in a classroom in Mapoteng last Thursday in a suspected love triangle, police say.

The killer allegedly suspected that the 39-year-old teacher had a love affair with his wife.

Police spokesperson Masupha Masupha said the killer, 24, entered the classroom and shot the teacher in front of the students.

They are in hospital with serious gun wounds.

When he arrived at his in-laws home his wife had already fled.

“The sister and mother-in-law were badly injured and were admitted to hospital. He was later found dead in his yard with two bullet wounds,” Masupha said.

Next to him was a .38 special revolver, which was illegally in his possession.

Police believe that he committed suicide.

Masupha said couples whose marriages wade in turbulent waves should contact specialists at the Child and Gender Protection Unit rather than resorting to violence.

In a separate incident, an angry mob from Ha-Mokhethi village in Berea shot dead a man in a neighbouring village of Mosalemane because they suspected him of stocktheft.

The police say the Ha-Mokhethi villagers raided the Mosalemane village in search of the men and a bloody fight ensued between the two communities.

The man’s relatives and neighbours tried to protect him but the angry Ha-Mokhethi men managed to kill him.

“Angry villagers from Ha Mokhethi went to the deceased’s home and demanded to see him but his relatives tried to hide him. They fought the relatives and the Mosalemane villagers joined to help the man’s relatives,” Masupha said.

Several people from both villagers were injured during the fight.

Three men aged between 20 and 31 were arrested and police confiscated three illegal firearms.

Masupha urged the community members to stop taking the law into their own hands.

Meanwhile, a 24-year-old Quthing man raped a granny, 72, because “he thought that he was drunk”.

Masupha said it was at around 3 am when the man broke into the home of the old woman and raped her.

She screamed and called for help and neighbours responded immediately and the man was caught.

“The suspect told the police that he raped the old woman because he thought he was drunk,” Masupha said.

He is in police custody and is going to be tested for HIV before his trial in court.

‘Sadc not too soft on Mugabe’