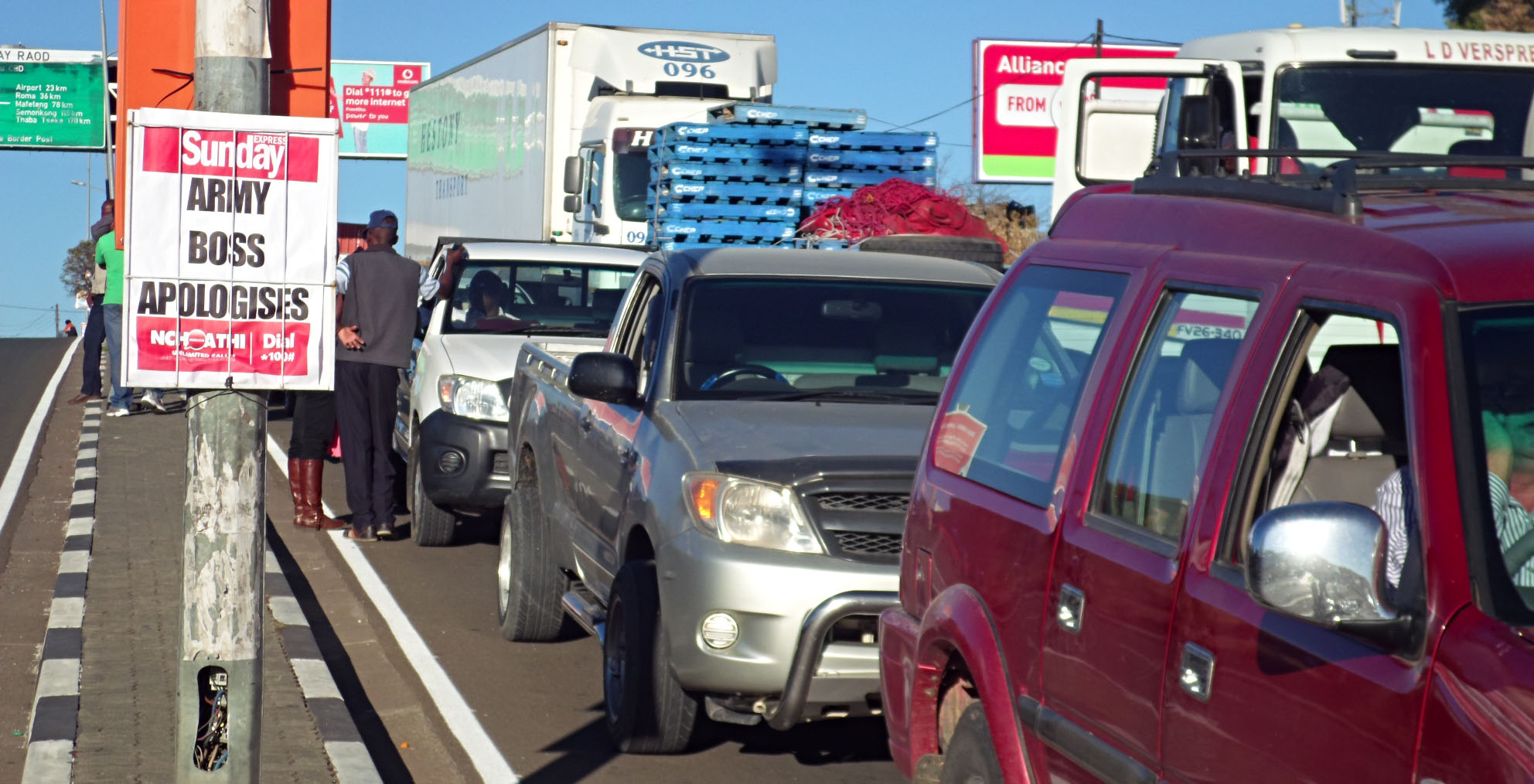 The Lesotho Passenger Transport Crossborder Association (LPTCA) members have vowed to continue stopping pedestrians from crossing into South Africa through the Maseru Bridge Border Post until their differences with their South African counterparts have been resolved.

The LPTCA ferries passengers from Lesotho to Durban, Gauteng, Rustenburg, Vereeniging, Germiston, Cape Town and Botswana, but has persistently met with stiff resistance from South African operators, who accuse the organisation of “stealing” their business.

However, the feud turned violent on Tuesday morning, when the South Africans destroyed two taxis and a private vehicle belonging to Basotho at the Bridge as they fought over passengers travelling from Lesotho to Gauteng and Rustenburg.

The violence resulted in the closure of the border-post by Lesotho taxi-operators from Tuesday morning until it was opened late yesterday, but only for “private vehicles”.
The LPTCA Public Relations Officer, Makalo Matekane, yesterday told the Lesotho Times, the reason for the closure was to pressure the authorities into taking action against the South African taxi operators, whom they accused of ignoring a court order barring them from interfering with Lesotho taxis.

The court order, a copy of which the Lesotho Times managed to obtain, was issued on 4 October 2013 in Bloemfontein.
“The South African police called us (LPTCA) to a meeting on Tuesday, which was attended by our Minister of Public Works and Transport (Lebesa Maloi) and officials from his ministry, but the South African taxi-operators and their government officials were not there.
“During the meeting, we were asked to open the roads while we were still negotiating so that people can cross to South Africa, yet the South Africans refused to be part of the meeting.
“Those people destroyed our vehicles; a Sprinter, Quantum and one private car, so why should we be friends with them?
“The cross-border law says a taxi rank should be at least two kilometres away from the border but theirs is just at the border-gate, which is illegal, but nobody is doing anything about it,” Mr Matekane said

A local taxi-operator,who refused to be named, said Basotho always complained of being ill-treated by South African taxi operators, “which is why we should be allowed to take our people to their destinations in South Africa and back”.
“Many passengers have been complaining about the bad treatment they get from those people.
“Passengers come to us complaining that they have lost their luggage, and some complain that when they have left their change at the registration office, they don’t get the money back.
“These people have also just threatened a school bus driver who ferries children from Lesotho to Ladybrand, saying he should never cross over again or they will harm him, which is unacceptable.
“There are allegations that some South African police officers also own some of the taxis and this is why they don’t protect our members when they are attacked.
“When the vehicles were destroyed yesterday at the South African taxi rank, the police did nothing to protect us, yet they were there watching as those men were attacking those vehicles with stones.
“They accused the private car driver of stealing passengers from Lesotho and taking them into South Africa.
“The private car that was destroyed had already passed the rank, but was blocked by a South African taxi-driver, who drove it back to their rank, then damaged it,” he said.

Meanwhile, before Lesotho taxi-operators removed their vehicles that were blocking the border post yesterday afternoon, there was utter chaos at the Bridge, with businesspeople, patients, schoolchildren, truckers and ordinary travellers stranded while immigration officials could only watch helplessly.

The Minister of Law, Human Rights and Constitutional Affairs, Haae Phoofolo, on Tuesday met with the taxi-operators to hear their complaints, but could not persuade them to remove their vehicles and open the way for traffic to pass.

The taxi-operators were also stopping pedestrians from crossing the Bridge, suspecting they would board South African taxis once across the border.
“I am going back to report your complaints to other stakeholders. Government officials from both countries will meet to resolve the matter soon,” the minister said.
“In the meantime, I am pleading with you not to resort to violence because this issue is going to be resolved.”
A traveller, who had failed to cross the border since Tuesday, yesterday said he hoped the feud would end soon.
“I just hope this will end soon because I am scared that I will lose my job in South Africa. I was surprised when I got here at around 12 midday yesterday to find that there was no movement,” the traveller, who refused to be named for fear of being “killed” said.
“I cannot afford to go to another border-gate as it will be costly for me; I slept here last night with the hope that the issue will be resolved by today.”

Meanwhile, a Lesotho Revenue Authority (LRA) official, who refused to be named, said the authority had lost a lot of revenue since they collected “thousands of maloti per hour at the Maseru Bridge Border Post alone” through tax.
“This blockade has affected the economy as we collect a lot of money here,” the official said.