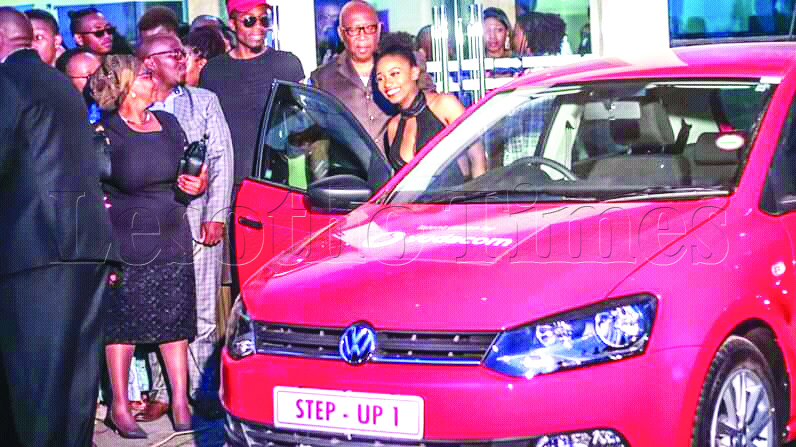 TAMIA Phooko was on Sunday crowned the inaugural winner of talent search programme Step-Up Lesotho amid complaints from different quarters who thought she was undeserving.

Tamia was crowned winner ahead of Nthabiseng Khetsi and fans favourite Michael Sway at a colourful event at “Mathabiseng Convention Centre in Maseru.

She took home a brand-new VW Polo Vivo vehicle, a United States record deal and a three-year IBC scholarship among others after garnering 45372 votes. First runner up Nthabiseng managed 33219 votes while the third placed Sway managed only 16736 votes.

However, it was the top three who left the audience in awe taking turns to perform their two tracks.

Chief ‘Maseribane said the country had a lot of unrecognised talent and commended organisers Khaya Holdings for introducing the competition.

Chief ‘Maseribane said he hoped that the next edition of the competition would be better calling for improved sponsorship.

“I wish to see the next edition competition being sponsored with at least M2.5 million. I believe that way we will see more Basotho joining in numbers,” Chief ‘Maseribane said.

Apart from the pomp and fanfare, the competition has been blasted on social media with some saying Tamia’s victory was riddled in controversy.

This is after in early September, Tamia had registered the lowest votes in the top-10 but was saved by the judges using a “lifeline” to give her a chance to redeem herself.

As fate would have it, she then went on to clinch the converted prize in the finale.

Most followers of the show said Nthabiseng and Sway were more deserving of the crown but one of the organisers, Paul Banda this week told the Weekender that Tamia’s voting strategy won the competition for her.

He said the show was designed in such a way that the judges could save someone in the top four to create hype as the competition headed for the finale.

“When people are in the top-10, there is no way of knowing who is going to be in the top three because people are voting for their favourites. The person with the least votes goes home until we get to the top three where there are no more eliminations.

“Tamia happened to be fortunate and her team came up with strategies on how to vote more. I think this is the most transparent show that we have ever run because everything is in black and white… When the power is in the people’s hands, it is a numbers game. Team Tamia had a strategy and it worked,” Banda said.

He added: “The DNA of the show is clear and it allows people to vote for their favourite person. If team Tamia had a strategy to turn around the odds, how does that concern Khaya Holdings or Vodacom? If it was the judges eliminating the contestants, we would have issues by now and that is why the power is given to the people just like any other competition like Idols, X factor etc.

“Khaya Holdings thanks Vodacom, our main sponsor and all the partners, the voters, viewers and the contestants who worked tirelessly to make Season 1 a success. We will start the auditions for Step-Up Season 2 by March 2020. However, we will start promotions on LTV as early as February 2020,” Banda said.