Super-profits, but not for mineworkers 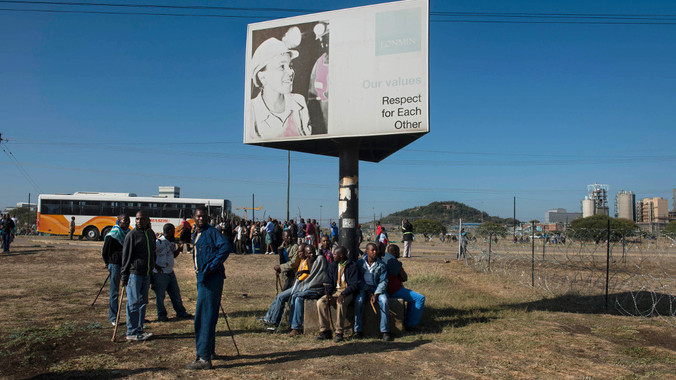 A new report says platinum mines could have afforded to pay workers more.

South Africa’s longest strike is continuing, with government attempts to broker a deal taking negotiations back to where they were three months ago.

Employers say the demand for a R12 500 “living wage” by the Association of Mineworkers and Construction Union (Amcu) on behalf of the strikers is not affordable in the current economic climate.

But a new research paper says huge profits in the past decade were given to investors while workers benefited little. If this had not occurred, workers could be earning the wage they are striking for.

In 1999 platinum cost $350 an ounce. A decade later it was $2 710 an ounce. A paper by the research group Research on Money and Finance released this Friday – Demanding the Impossible? Platinum Mining Profits and Wage Demands in Context – said these profits did not go to workers.

“The South African regulatory system allowed them [mining companies] to capture the lion’s share of the benefits, extracting enormous resource rents which were distributed to shareholders,” according to the report by two University of the Witwatersrand research units and the University of Manchester.

Return on investment
The operating profit margins of the three platinum producers now experiencing strikes – Anglo American Platinum, Impala Platinum and Lonmin – were more than double those of other companies on the JSE Top 40 for this period. The return on investment was over 10 times the stock exchange’s average on several occasions, it said.

“Platinum shareholders have done extremely well over the last 13 years in comparison to labour,” researchers Andrew Bowman and Gilad Isaacs wrote in the report.

Between 2000 and 2008 workers received only 29% of the profits produced by the platinum mines – the money distributed to workers in wages, to the state in taxes and to owners of the capital in profits and dividends. This was half the average for the economy as a whole, in which workers got 51% of the profits.

At Implats more was given to shareholders than was given to the whole workforce in wages: R47.7‑million versus R43.5-million. At Amplats and Lonmin the numbers were much closer, but still fell in favour of shareholders.

“It is clear that for the boom years these payouts were significantly above the average for the wider economy,” the paper said. Share prices also soared. “These trends show the prioritisation of shareholder value maximisation, which dictates that costs are minimised, especially labour costs.”

Although the R12 500 entry-level basic wage demand was double current levels, it was affordable in the context of the mines’ long-term profitability. The report said mining companies are portraying themselves as cash-strapped, but this narrative was “selective” because it only looked at a “narrow time frame” when the global recession and work stoppages had hit the companies, and ignored long-term profitability.

The Wits report also criticises union inaction: “It was during this boom time that labour was best positioned to fight for meaningful wage increases, but for the most part NUM [the National Union of Mineworkers] adopted a compliant approach to relations with management.”

The report, noting that a strike was inevitable, says: “It is against this backdrop of super-profits, from which labour gained too little, that the strikers’ wage demands must be viewed.”

Although the mines have said the R12 500 demand would mean a 40% annual increase, the research shows that the average increase would rather be around 15%. Had the wage increases occurred during the era of high profits, they would have constituted between 20% and 50% of the average annual distribution to shareholders.

Resource rent tax
The researchers proposed a resource rent tax, that would tax profits above 15% heavily. This would allow companies to remain “comfortably profitable” and create funds for skills development and for times of lower profits.

These plans were included in the ANC’s 2012 State Intervention in the Mining Sector discussion document, but have been abandoned. “There is no reason why gains during a commodities boom should predominantly benefit mining executives and shareholders,” the report states.

With the strike continuing, the state had to intervene to find a solution and also create a sector-wide plan for the future. “Mining capital must be forced to play ball,” it says.

With strikers starving and being forced to return home, Amcu has so far refused to budge on its demand for a basic R12 500. The task team appointed by new Mineral Resources Minister Ngoako Ramatlhodi took the mines’ offer of an R800 annual increase for five years to the union, which rejected it this week.

This would create a total cost-to-company of R12 500 for the lowest paid workers, the task team said. The union’s president, Joseph Mathunjwa, said: “The government proposal was not a new proposal. They introduced a proposal that had already been rejected by our members three months ago.”

The five-month strike has also seen the Labour Court unsuccessfully trying to broker a solution, with Judge Hilary Rabkin-Naicker taking the unusual step of mediating herself.

*Due to the short time available, the platinum producers were unable to respond to comment in time for the newspaper publication deadline.

The fortunes of resource businesses are typically cyclical and typically influenced by external factors – metal prices and exchange rates. Added to that, the platinum sector faces great volatility as it is influenced by fundamental supply and demand for the metal, and market sentiment.  Investors in the business know and understand this, and most certainly accept this high/low reward cycle as part of the risk of investing in resource companies

Typically, during ‘good times’ the companies will be more able to invest in growth and expansion, whereas capital spending is one of the first areas that is cut when profits are constrained.

However, in remunerating our employees (who currently account for between 50 and 55% of costs) and paying suppliers, we need to plan for relatively stable and consistent contributions through the cycle. Wages and other expenses simply cannot be dramatically curtailed at will and, in fact have consistently increased at rates greater than CPI. This is why it has been critical to consider the sustainability of wages and salaries over a long period of time, no matter where we are in the cycle.

We would suggest that the relative returns to all stakeholders must be considered over an extended period of time considering the entire investment cycle.  Focussing only on a short boom or bust period by any of the stakeholders serves only to support individual agendas.

We suggest also that affordability has to be forward-looking, factoring in projected future earnings and considering future costs.  If the increased cost base is not offset by projected earnings, then the business will be in financial stress and will have to take drastic action to restore profitability to be sustainable.

But the AMCU demand, even tempered over four years – which represents  an annual compounded increase of 23% – is simply not affordable and it would  be irresponsible of companies to agree to increases that would cause irreparable damage to our businesses and result in significant restructuring and consequent job losses.

Rather than how can we better split the profits we are not making, let’s turn the conversation around, and focus on how we can work together to generate the financial means to be able to better reward all our stakeholders, not only now, but in the future.

Put another way, the report concludes that the “public debate needs to take greater cognisance of all the facts, with a long-term view in mind, and deal with the broader issue of how best to manage our mineral resources to ensure all enjoy in the benefits they bring.”

Dynamite Crew show for a worthy cause