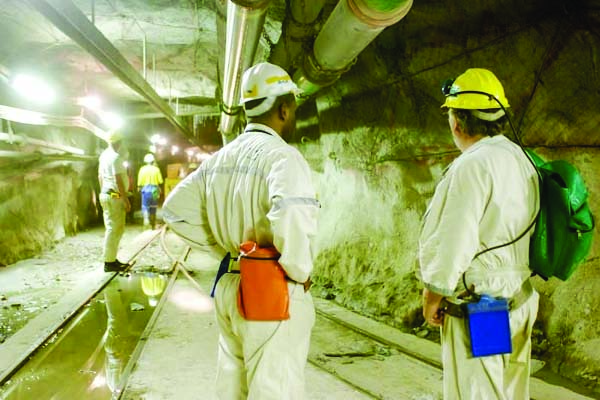 JOHANNESBURG – Harmony Gold, South Africa’s third-largest bullion producer, said Tuesday it will cut jobs at its troubled Kusasalethu mine to try returning the operation to a profit, as it has consistently recorded losses since September 2012.

Kusasalethu, which is Harmony’s largest mine by output, has been hit by strikes, union rivalry, technical glitches and a shutdown needed to remove illegal miners. The Association of Mineworkers and Construction Union, which held a five-month strike in South Africa’s platinum mines this year, became the majority union at the site in 2013.

The consultations on job cuts are taking place over 60 days as outlined in section 189 of the Labour Relations Act.

Kusasalethu had cash outflows of M392 million rand in the year ended June and posted cash losses of M112 million the following quarter, Harmony said. The mine, which straddles South Africa’s Gauteng and North West provinces, has been in operation since 1968.

Chief Executive Officer Graham Briggs said the company has begun a 60-day consultation with unions at the mine, which employs about 6 300 people including contractors.

During this time, the parties will consider avoidance measures that may include offering voluntary separation and early retirement packages to employees as well as seeking to transfer as many employees as possible to vacancies that exist elsewhere in the company.

“Kusasalethu has not returned to profitability after various setbacks,” Chief Executive Officer Graham Briggs said in the statement.

“We need to be both decisive and mindful in our actions so that we preserve the viability of this mine for several decades to come.

“Without these actions, this mine will not survive and that would indeed be a tragedy for our company, our employees, our communities and our country.”

The new plan for the mine —located about 75 kilometres west of Johannesburg— will involve digging a lower volume of ore at higher grades and reduced cost, Mr Briggs said.

Gold producers in general are caught in a bind as prices tumble and costs rise, forcing companies to shelve exploration projects and reassess capital-intensive operations.

The spot price of gold slipped around 1 percent on Tuesday and has shed about 13 percent of its value over the last 8 months.

Spokesman for the National Union of Mineworkers Livhuwani Mammburuu said the union had not received any notice from Harmony of its intentions to cut jobs.

“We are very surprised that Harmony is retrenching but as the NUM we will fight very hard to save these jobs,” he said. “We are not going to allow companies to retrench however they want.”

Mammburuu said the union would meet with Harmony’s management this week to discuss its plans.

Rival union Association of Mineworkers and Construction Union (AMCU), which represents about 72 percent of the miners at Kusasalethu, could not immediately be reached for comment.

Job cuts are a difficult issue in South Africa, where the jobless rate is around 25 percent and there are still big income disparities.

Harmony said improvements and investment into the Kusasalethu mine had been fruitless and its new plan would entail mining lower volumes at higher grades at a reduced cost.

Beer festival saved by the music