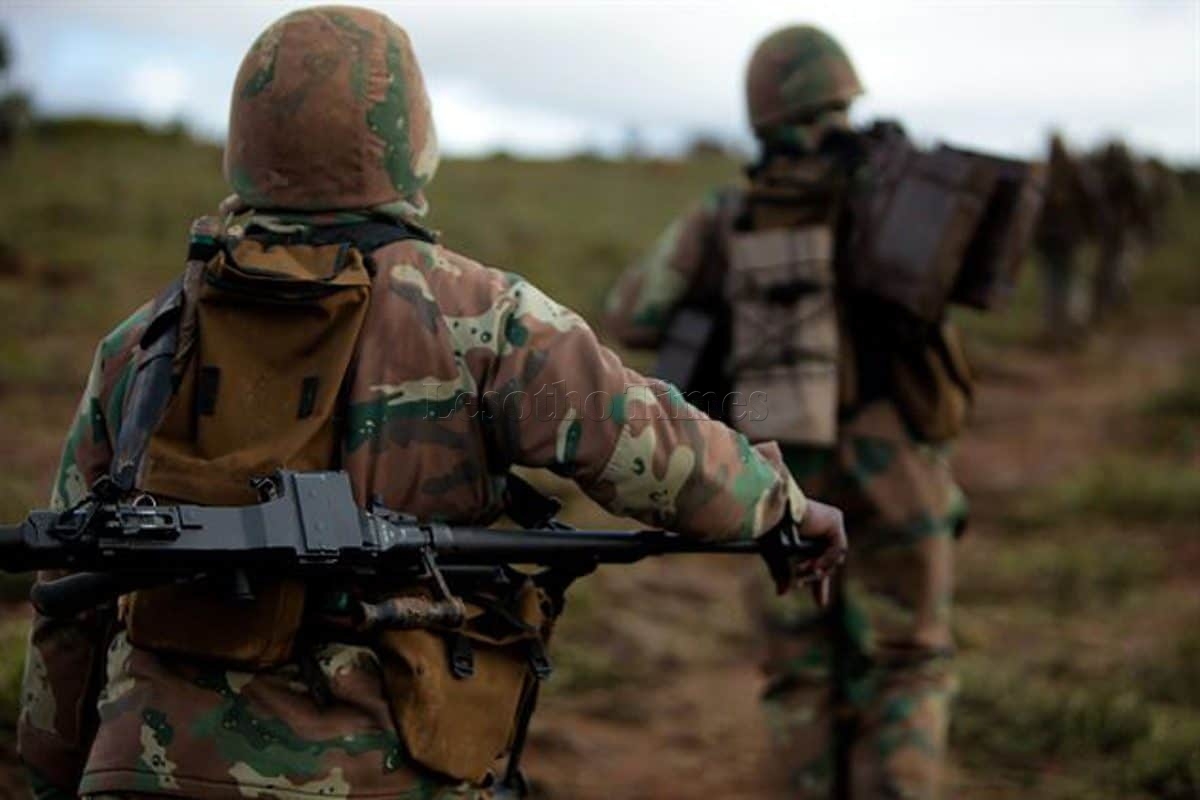 MAKHOAKHOENG villagers in Butha-Buthe district say they are living in fear of officers of the South African National Defence Force (SANDF) who are carrying out a reign of terror in their area and stealing their livestock.

Such is the alleged plight of the villagers that they have petitioned Prime Minister Thomas Thabane to intervene in the matter and call the SANDF and the Beginsel Farm owner to order. Relebohile Moyeye, a press attaché, in the Prime Minister’s Office said he had only heard of the petition from one of the petitioners but he had not seen it for himself.

Mr Moyeye said he would inquire about the petition when other staff in the premier’s office returned from the Christmas break.

The Bethlehem branch of the SANDF were also contacted via email for comment but they were yet to respond at the time of going to print.

The Lesotho Times has seen a copy of the petition whose introduction states that “the purpose of this petition is to officially make the government of Lesotho aware of what, we rural inhabitants of Makhoakhoeng, consider to be a highly organised and illegal cattle rustling coordinated by the farmer in the neighbouring Beginsel Farm in the Free State”.

“The purpose is to further enlighten the government on the cunning methods used by the SANDF to steal our animals. We hope that the government will visit us as a matter of urgency in order to verify and ascertain the facts and take immediate corrective actions. We don’t know the terms of reference of the SANDF but we believe that stealing our domestic animals is not one of them,” the villagers state in the petition to which was copied to Ministers Lesego Makgothi (Foreign Affairs and International Relations) and Lehlohonolo Moramotse (Police and Public Safety), Mahala Molapo (Local Government and Chieftaincy) as well as the Attorney General Haae Phoofolo.

In an interview with this publication, the chairperson of the petitioners, Thabo Kakasa, said their troubles started in 2017 when a female farmer who had just occupied the Beginsel Farm began impounding their animals after they strayed into her farm.

Mr Kakasa said it was not uncommon for livestock from both sides to stray, adding that they had an understanding with the previous farm owner to return each other livestock whenever they strayed.

He said things changed when the current farm owner arrived and began impounding their stray animals before transporting them to a place more than 100km away in Ladybrand.

Once confiscated, Mr Kakasa said the farmer charged them huge amounts for each animal which the villagers could not afford. “She has seized our animals and transported them to Ladybrand where we have been to pay large amounts of money to get back the animals. Most of us cannot pay such amounts because we are poor. I have lost five cattle which were confiscated and could not be found when I went to collect them,” Mr Kakasa said.

He said the SANDF got involved in the matter after their village chief, Letsika Matela, impounded the South African farmer’s 13 horses after they strayed onto his land and destroyed his crops.

“Chief Matela demanded M2000 per horse which was believed to be commensurate with the destruction. The farmer refused and chose to pay M8000 for all the 13 horses, after he had initially angrily threatened to free his horses. The chief had no option but take whatever was offered,” Mr Kakasa states in the petition on behalf of the villagers.

He said lately the farmer had roped in the SANDF which was even using a low-flying military helicopter to drive animals across the border area into South Africa.

“Of late, the most shocking development in this farm is the use of a SANDF chopper within the Lesotho border to steal animals. They fly it very low behind the animals, scaring them and sending them running across the river where they collect them into a waiting truck. Twice this method was brazenly used during broad daylight. First they rustled 14 cattle and the second time they took more than 50 sheep.

“The SANDF soldiers also cross the border and take animals…On 29 November 2019 at 13:00 hours, two soldiers crossed the border and tried to forcefully take 14 cows from their minder. He fought back defending his stock but they hit him with the butt of the gun. But he fought back until the other soldier advised the one who was fighting to leave him alone.

“The soldiers left and the cows were saved that day. Unfortunately on 13 December 2019, the same young man was assaulted by an ununiformed man who introduced himself as a member of the Lesotho army. The man was armed with a pistol and he accused the young man of disrespecting the SANDF soldiers and resisting the impounding of the animals that had crossed the border.

“A charge of assault has been laid with the Lesotho police against the man. Whether we shall get any help from the police, only God knows because it seems the whole thing is a wide and well-organised criminal racket.”

According to the petition, the Makhoakhoeng villagers rely on the Mohokare River for drinking water for their livestock and when they take their animals to the river, there will be “vicious and merciless SANDF soldiers waiting” to impound their livestock.

It is said that in September 2019, two SANDF officers crossed into Lesotho and stole three sheep which they slaughtered for consumption.

“Often a large number of animals are impounded and from a distance we have witnessed the scene of feasting/barbecue/braai held for many (South African) soldiers just across the river. Some of the SANDF soldiers buy alcohol in Lesotho and socialise with women in the villages and we hear they boast about the braais…

“We are really disappointed with the quality of the SANDF leadership…We refuse to be victims of the corruption and incompetency of both the South African and Lesotho governments. It is their business to ensure our armies are professional and disciplined.

“Cattle rustling is for criminal cowboys, not professional armed forces. We therefore kindly request our Lesotho government to intervene in this matter and come to us and verify what we have said and take an immediate necessary legal action. We are sick and tired of being pushed around by the moody farmer in our own place,” the petitioners state.

The petitioners said they were ready to engage in talks with the South African farmer to discuss a return to the peaceful co-existence they enjoyed with previous farm owners.

“The topography and nature of the land in this valley of ours is such that we must co-exist and live together peacefully, while we discuss our daily problems and challenges as they may arise. She is not the first white farmer in this place. We have co-existed peacefully with her predecessors since the 1930s. Peaceful coexistence is doable.

“If she is still hankering for the good old days of apartheid where black people were sub-human beings, then sorry, she gets our deepest sympathy, being bullied by the white supremacists, aided by SANDF, is totally abhorrent and provocative, and is creating unnecessary stress and hatred…,” part of the petition states.

When contacted for comment, the Lesotho Defence Force (LDF) spokesperson, Lieutenant Kelebone Mothibi said he was not aware of the Makhoakhoeng villagers’ petition nor was he alerted of any of the alleged incidents involving their SANDF counterparts.

Attempts to get comment from Mr Makgothi were also futile as he did not answer his mobile phone. Neither did he respond to WhatsApp messages which were sent to him.

Does the PLMC really care about football?