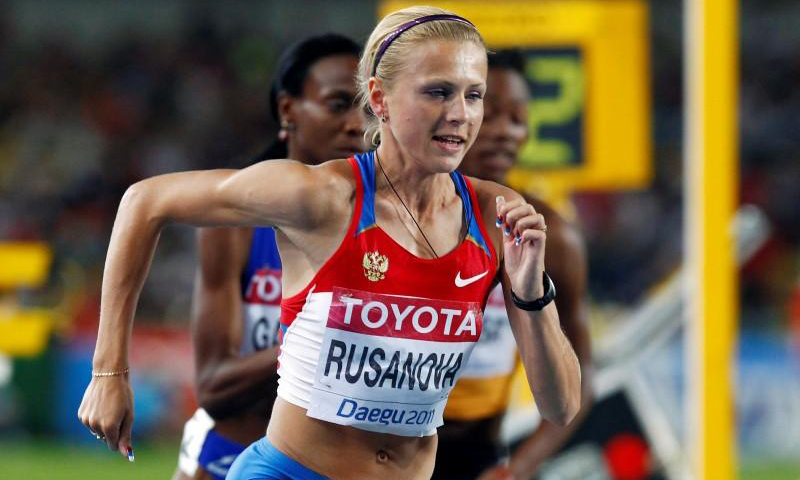 MOSCOW-The sportswoman who blew the whistle on doping in Russian athletics is in hiding abroad, pursued by a barrage of criticism from former colleagues and officials at home who accuse her of betraying her country.

Yulia Stepanova, an international runner who was herself suspended for doping offences, secretly recorded Russian coaches and athletes over almost two years describing how they used performance-enhancing drugs.

The 29-year-old’s evidence formed a major part of an investigation that led to Russian athletes being suspended from international competition this month, triggering the deepest crisis in Russian sport since the boycott-hit 1980 Moscow Olympics.

While her role has been described as courageous by supporters abroad, at home she has faced accusations of being a liar, and of betraying her countrymen for money or in exchange for a residence permit in a wealthy country.

“She’s a traitor,” said Vladimir Kazarin, Stepanova’s former coach who was named as someone involved in doping in the investigation report, commissioned by the World Anti-Doping Agency (WADA). He denies the allegations.

“She betrayed me, betrayed her homeland. That’s why she’s a traitor,” Kazarin told Russia’s NTV broadcaster.

Before her accusations were made public last year, Stepanova and her husband – who have a child of pre-school age – left Russia and moved to Germany where they set up home but kept a low profile.

Christoph Kopp, the head of the local athletics club who helped them settle in Germany, said they kept their details out of public records so they could not be traced, and wrote the family name “Mueller” – one of Germany’s most common names – on the doorbell of their home.

“We handled the situation very, very carefully when they came to Germany,” said Kopp, chairman of the LAC Olympia 88 Berlin athletics club.

He said Stepanova and her husband were on the move again in September this year, leaving Germany for North America. Someone connected to WADA had arranged for them to make the move, he said.

WADA did not respond to questions about Stepanova.

Attempts by Reuters to track down Stepanova and her husband Vitaly, through colleagues, acquaintances and international sports officials were unsuccessful. It is not known where they are living.

The last publicly-available record of her whereabouts was from the German capital, where she was listed as having competed for LAC Olympia 88 Berlin in a 1,500 metres race in July this year.

Russia’s sports authorities have disputed some of the WADA report’s allegations about doping, but they say they will do everything necessary to get their athletes back into international competition, including replacing the leadership of their athletics federation and revamping the national anti-doping agency.

The attitude in Russia to Stepanova typifies how many in the country view the scandal: they acknowledge there is a problem, but also believe it has been blown out of proportion by Russia’s rivals for political reasons.

Stepanova is a middle-distance runner who competed for Russia until she was herself handed a two-year suspension on suspicion of doping in 2013.

She and her husband, a former Russian anti-doping agency official, first took on the role of whistleblowers last year, when they featured as witnesses in a TV documentary that alleged widespread corruption and drug-taking in Russian athletics.

Hajo Seppelt, the journalist who made the documentary for German TV station ARD, told Reuters the couple – anticipating negative reaction – left Russia for Germany last year, before the programme was broadcast.

“They knew when this story comes out they may have a lot of problems in Russia,” said Seppelt, whose documentary prompted WADA to commission its investigation.

The prevailing attitude in Russia, he said, was: “It’s just a question of honour. You don’t do that to your country, you don’t blame it.”

Seppelt said he did not know where Stepanova was now and, that if he did, he would not disclose the information.

Russian sports officials said they did not know anything about any threats against Stepanova or her husband that could have compelled them to seek refuge abroad.

“They need to get citizenship (in a foreign country) and that’s why they made this up. We don’t threaten them,” said Anna Glushenko, a Russian Athletics Federation spokeswoman.

A spokeswoman for the Russian Sport Ministry said Stepanova had not contacted them to report any threats.

Stepanova is the star witness for the investigation into Russian athletics doping. Her name is mentioned 141 times in the text of the 323-page report produced by investigators.

Her evidence included text messages, emails, testimony she gave in interviews to investigators as well as secret video and audio tapes she recorded between February 2013 and November 2014 in locations ranging from a hotel in Kyrgyzstan to Moscow’s Kazansky railway station and the athletics federation offices.

The report cites Stepanova’s testimony as evidence for doping allegations against several senior Russian athletics federation coaches, and some athletes.

In one episode described in the report, Stepanova secretly videoed a conversation between herself and Kazarin about her training regime.

“That is why we only have oxandrolone and primobolan and, at some point in the early stages, just a little, you can do a few ampoules of EPO, of course. But make sure there are no checks at the time, nothing like that,” Kazarin said, according to a transcript.

Oxandrolone and EPO, also known as erythropoietin, are listed as banned substances under WADA rules.

In the same video, the report says, Kazarin can be seen handing over 15 tablets to Stepanova, and advises her on when to take them. They were later tested in a laboratory and found to be oxandrolone, according to the report.

Asked by Reuters what he thought about the role Stepanova played in the report, Russian Sports Minister Vitaly Mutko said: “I would like to hope that she had a genuine desire to restore health to the sport, if that is what is really motivating her.

“But if she is driven by some kind of mercantile things, money, or a residence permit in some country, Canada for example, then I don’t know.”

He said if she genuinely wished to tackle doping in her sport, she could have approached a Russian federation official with her concerns. “There was no need to make a film,” he said.

Tatiana Lebedeva, vice-president of the Russian Athletics Federation, said Stepanova and her husband were trying to make themselves look like victims.

“When they said they were going to be threatened they were making this up in advance. And they ended up leaving. There was nothing, no threats,” said Lebedeva.

“Of course (innocent) athletes who now suffer wouldn’t say thank you to them. They weren’t involved in anything but they were accused of it by an athlete who had used doping. When she was caught she said that all of them did it.”

Seppelt, the documentary-maker who worked with Stepanova and her husband, said they were motivated by a genuine desire to prove that there was wrongdoing inside Russian athletics.

Since the release of the WADA-commissioned report and the uproar that followed, the couple have made only one public comment, issued last Saturday via the same German TV station that produced the documentary.

“That truth in sports matters makes us feel glad. We don’t regret anything we have done.”- ibnlive.com