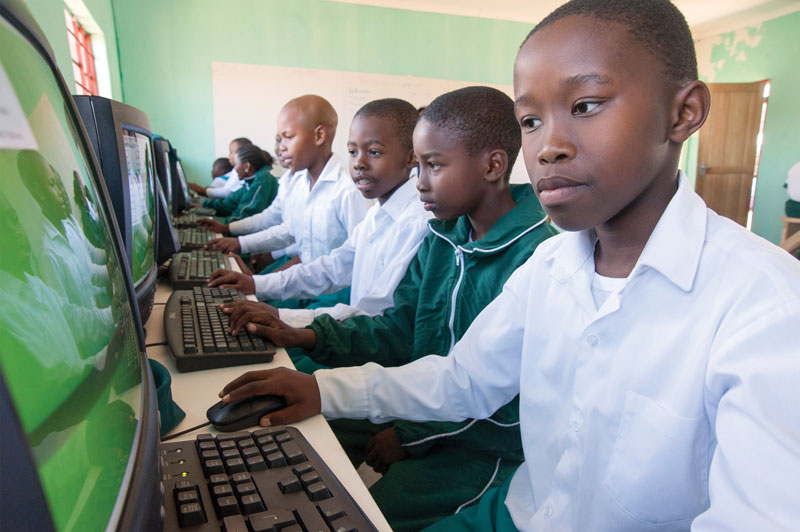 IT is worth noting that there has been an attempt by the Lesotho government through the Ministry of Education and Training to introduce a new curriculum bearing the following learning areas, among others:  Personal, Spiritual and Social development. The aim of the curriculum is to connect learners to real life challenges such as unemployment, poverty, HIV and AIDS, environmental degradation, human rights and democracy, to mention a few.

The traditional education system of Botho was very instrumental in building and shaping a person who will be significantly beneficial to his/her society. In the context of the traditional Basotho education system, the educated were those who were skilled, respectful, honest, cooperative and abide by the social order. These were true reflections of Botho Philosophy.

The traditional Basotho education system was not done through writing but was verbally active. It was a form of education by which, knowledge was passed orally from elders to children through the instructional and practical processes. It was instructional because children were not allowed chance to question what was taught. For an example, a question of why one should not eat eggs as a teenager was irrelevant. It was also practical because children learnt by watching and doing for acquiring skills in art work, domestic work and farming to mention a few. Teaching was also done through the use of songs, legends, stories and riddles. Out of these, children learnt the Basotho inherited knowledge, skills, cultural norms, values and all were based on Botho philosophy. Skills acquired prepared children to be productive through self-employment. This form of education was relevant to the needs of the community hence it was a community based education aiming at solving concrete moral, political and economic problems.

The traditional Basotho indigenous education system was used to introduce children to real life issues for the purpose of solving their individual and social problems. By introducing children to real life issues, this prepared boys and girls by equipping them with the skills suitable for their gender since they were to play different roles in the society after marriage. For example, boys were prepared on how to become heads of their families, farmers and warriors to mention a few. Likewise, girls were prepared on how to care for their families.

The Basotho inherited knowledge of skills, norms and values that were passed from elders to children through the traditional Basotho education system really benefited the traditional Basotho in two observable ways. First, it helped children to acquire skills that prepared them to use their natural talents properly in order to meet their basic needs such as food, shelter and clothing. Consequently, skills acquired were effectively put into practice hence children became self-employed and self-reliant. This implies that children were useful members of the traditional Basotho society due to their ability to address the problem of unemployment which is a basic cause of dependence on other nations by many African countries today.

Second, it also benefited children by teaching them communal over individual values and virtues. The most celebrated virtue was the respect for the elders and equals. This virtue was taught before the initiation ceremony and it was intended to induce personality and good character in children. Before the initiation, lessons were given for the development of the right character and personality. It was due to this virtue of respect that children were easily taught and the communal labor was done without any criticism coming from them. It then goes without questioning that all other individual and communal virtues such as patriotism, peace and justice and others followed the virtue of respect.

Weaknesses of the system

It has been mentioned above that the traditional Basotho education system was a verbal form of education. This means that the inherited knowledge and skills were orally imparted from elders to children. Furthermore, children learnt by watching and doing without writing anything and they were prevented from critically reflecting on what was taught. This suggests that the weakness of not preserving the inherited knowledge and skills in a form of writing for future use was potentially dangerous for the spreading and sustainability of Botho philosophy.

On the other hand, the practice of prohibiting children from asking critical questions on what was taught prevented children from developing critical and analytical minds. This implies that the denial of children to reflect critically on what was taught was a serious problem on the part of children and the development of Botho philosophy. In this regard, these two major weaknesses suggest that Botho philosophy could have been long developed if it was written and children were allowed to reflect critically and analytically on what was taught. Having discussed strengths and weaknesses of the traditional Basotho education system, it is necessary to discuss the significance of reinstitutionalizing Botho philosophy in Lesotho.

One would expect that the reinstitution of Botho philosophy could have been done since independence in order to retain and sustain the Basotho worldview and philosophy. On the contrary, the Western education system took priority over the traditional Basotho education system. The alien education to the Basotho changed their cultural values that were founded on Botho philosophy. Consequently, Basotho people started to be unable to independently solve their real life challenges due to the alien Western philosophy containing a new worldview. The inability continues even in the contemporary Lesotho.

The Lesotho government has a serious need of introducing a new curriculum bearing personal, spiritual and social development. This calls for the need of reinstitutionalizing Botho philosophy which benefited the traditional indigenous Basotho communities. This initiative is not only required in schools but it must cut across all social intuitions starting from home. The reinstitutionalization of Botho philosophy in Lesotho can positively connect learners and the society at large to real life challenges such as unemployment, poverty, HIV/AIDS, environmental degradation, human rights and democracy if these challenges are approached from the perspective of Botho philosophy.

Army has a role in nation-building