PS fears for his life after break-in at offices

THE Principal Secretary in the Ministry of Public Works, Mothabathe Hlalele, says he fears for his life after burglars this week broke into his offices in Maseru and got away with a computer, printer and M4000 cash stashed in his drawer.

The break-in could have occurred on Tuesday night or early yesterday as it was only discovered yesterday morning when Mr Hlalele reported for work.

The Lesotho Times crew visited the principal secretary’s offices yesterday and saw papers strewn all over the floor, wide open drawers and a safe which Mr Hlalele said had been moved from where it was usually kept. The safe had one of its sides partially grinded probably in an attempt to open it. 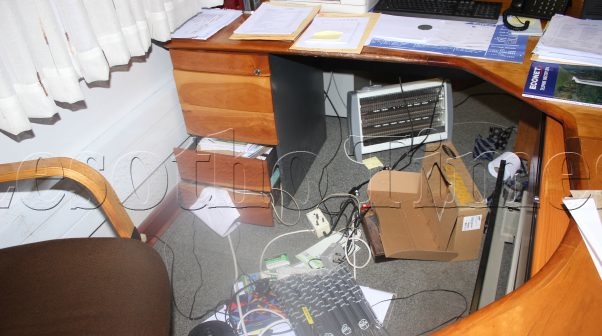 A visibly shaken Mr Hlalele said it was a mystery how the criminals broke into his offices without being detected by the security officers. He also said only his office had been broken into and he could not rule out the possibility that this was an inside job. Or it could have been orchestrated by members of his own All Basotho Convention (ABC) who mistakenly believed that he was Prime Minister Thomas Thabane’s blue-eyed boy.

He said the incident occurred barely a fortnight after he approached Police Commissioner Holomo Molibeli to inform him that he no longer felt safe and needed protection because of widespread rumours that he was an extremely wealthy man who kept at least 10 million in cash at his home or offices. He said the police commissioner had since given him security because he did not feel safe and “I fear for my life and that of my kids”.

He said only an HP laptop, a toner cartridge and M4000 had been stolen from his offices. He said although the burglars did not steal much, the incident had shaken him and left him fearing the worst after recent allegations on social media that he had M10million stashed in his house. He said some people believed that he had so much money because he occupied the “hottest seat in the country”- that of principal secretary for a ministry in charge of all the government tenders for construction jobs.

“As soon as I heard those rumours, I approached the office of the commissioner of police and told him that I no longer felt safe as people might break into my house thinking that I have money,” said Mr Hlalele.

“The rumour that I could have that kind of money lying around is the one that has caused this. This is a war that has been declared on me by people who think that I have money from alleged bribes in return for tenders.

He said it was a mystery how the criminals could have broken into his offices without being detected by the security officers.

“Only my office has been broken into. The CCTV footage will help us with leads in this case. This break-in could have been orchestrated by any of my colleagues in (ABC) party circles as there are some who see me as a threat and accuse me of being favoured by the prime minister. Anything is possible and this could have been done by anyone. Not so long ago there were some contractors who said since I was not reshuffled, they would remove me by any means. There are so many suspects and I even suspect some of the officers in this ministry.

“There is need for my security to be beefed up because I don’t feel safe anymore. I fear for my life and that of my kids. The national economy is weak and people can do anything to lay hands on any amount of money and I have spoken with the commissioner of police to deploy some police officers to my place because I feel threatened.

“The break-in is a reminder that one day I will die and being alive is like walking on a very thin line which might be cut someday by someone without even notifying me.”

He said although he was “traumatised, people should know that I am not going to quit my job for anything.

“I am staying put to serve the nation because leaving would only mean that the perpetrators have won. It would be as good as letting them run the show in terms of deciding who gets appointed into which office and who gets to be fired.

“Even if I wanted to be reshuffled, it is not my call to make. Quitting would mean that this country would be run by criminals. God help them so that the police find them before I do. If I find them first, they will rue the day they ransacked my office. I will kill them with my bare hands,” said Mr Hlalele whose initial fear had given way to anger.

Setback for bid to oust Thabane

No IMF bailout this year