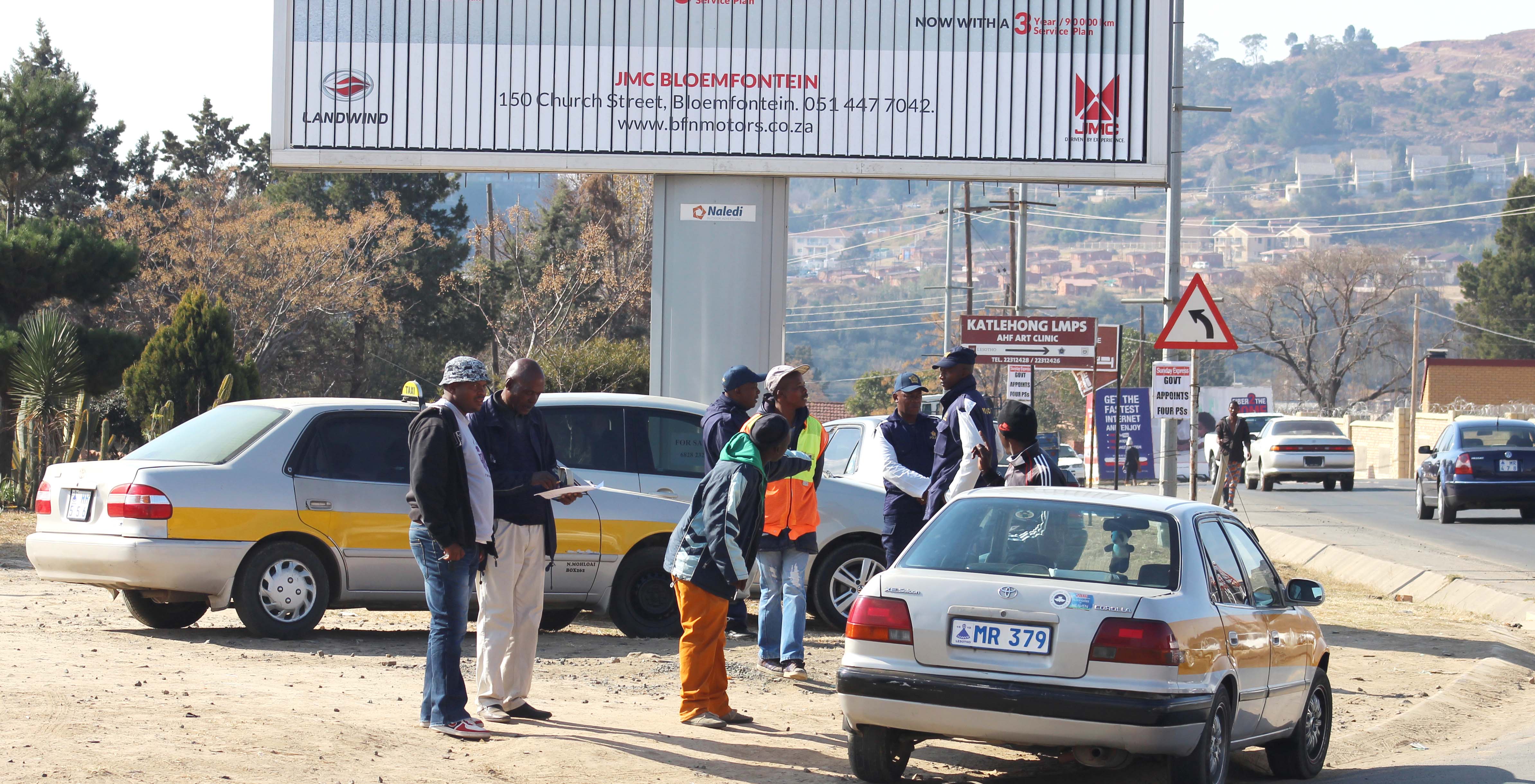 POLICE this week impounded scores of taxis operating without public vehicle permits in an ongoing blitz held in conjunction with the Maseru Region Transport Operators (MRTO).

The operation is targeting commuter omnibus taxis and “four-plus-one” taxis without the C and D permits respectively required to operate on the roads. Taxi drivers are also required to have a public transport permit to ferry passengers.
According to MRTO spokesperson, Lebohang Moea, they were assisting the police in identifying taxis without the requisite documentation.

“The campaign has been ongoing in many parts of Maseru, but on Monday we were stationed along the Thetsane route. This was after Thetsane taxi operators complained there were too many vehicles operating as taxis without authorisation in their area,” he told the Lesotho Times this week.

Mr Moea said the operators asked the Department of Traffic to stop issuing new D-permits for four-plus-one taxis to stem the influx of the vehicles.

“We made the request to the Department of Traffic almost two years ago. The department has not being issuing any new permits to reduce the influx of vehicles because we have more than enough taxis which are causing traffic jams on the roads.”

He said the operation was also meant to nip in the bud increasing cases of taxi-related crimes.

“The campaign will help us stem criminal acts associated with four-plus-one taxis, with a number being discovered at many crime scenes of late,” said Mr Moea.

“We agreed with the Department of Traffic to hold a ‘public sitting’ in which the vehicles issued with permits would simultaneously be assigned an operating route. This exercise will make it easy for route operators to know which vehicles are permitted on certain routes.”

Police spokesperson Superintendent Clifford Molefe said as of Monday, 65 taxis without the required documents were impounded in Maseru.

“Prior to Monday, we confiscated about 42 and 23 vehicles without permits in separate incidents,” he said.

“In accordance with the law, the drivers of such vehicles have also been charged because it is an offence to operate a taxi without proper documentation. The law is very clear on the documents taxi operators should possess, and it is only fitting that the accused people should explain in court after we have completed our job.”

For his part, Ministry of Public Works and Transport Information Officer, Madrass Mojai, said the Department of Traffic stopped issuing D permits at the behest of MRTO.

“We complied with the request made by taxi operators who said the influx of four-plus-ones was threatening their businesses. In our assessment, we also realised the small taxis were causing too much traffic. As a result, we decided not to issue new permits until further notice,” said Mr Mojai.

TAXI operators in Maseru have bemoaned the ongoing police operation to impound vehicles without public vehicle permits, saying it was putting them out of work.

According to police spokesperson, Superintendent Clifford Molefe, as of Monday 65 taxis without the required documents had been impounded in Maseru. The blitz is targeting commuter omnibus taxis and “four-plus-one” taxis without the C and D permits respectively required to operate on the roads. It is also swooping on taxi drivers without a public transport permit to ferry passengers.

Taxi operators and owners who spoke to the Lesotho Times this week said they feared the operation would put them out of work for good since the Department of Traffic had stopped issuing new permits.

Moeketsi Kholopane, who owns three four-plus-one taxis, said the taxi industry was the only sector in which he was able to earn a living since retiring from his mining job in South Africa. Mr Kholopane, who is deaf, said his impairment limited the available options for supporting his family of four.

“I have three four-plus-one taxis which I started buying in 2012 with the aim of operating a transport business. Some of my vehicles don’t have the required D-permit and, as such, are not allowed to operate,” he said.

“For three years, I have been trying to obtain the permits without any success. I even pleaded with some ministers in the previous government to intervene by obtaining the permits on my behalf. I also intend to approach the current ministers with the hope that someone will understand my situation.”

Mr Kholopane said he was left with no choice but to park some of his vehicles due to the police operation.

“I have paid fines before for failing to produce the necessary documents, but this time there is a heavier price to pay since the vehicles impounded by the police would only be released at the discretion of a court of law,” he said.

“I don’t have an alternative source of income, and my wife is not gainfully employed, so I am the sole bread-winner. My only wish is to be allowed to earn a living the best way I know how.”

Mr Kholopane said the clampdown risked increasing the crime rate due to the jobs that would be lost.

“Impounding the vehicles will cause many people to lose their jobs and add to the already high unemployment rate. The limited job opportunities may also contribute to crime. There are already many cases of people being mugged in taxis and our fear is they may escalate.”

Another taxi operator, Tumo Mosamo, said he felt frustrated by the “contradictory” rules set by the police and Department of Traffic.
“I had to pay a fine at a road block because I did not have the C-permit the police officer was asking for. I only had a C-permit payment receipt that I was given at the Department of Traffic and it was denied by the officer,” he said.

“The police and Department of Traffic seem to work in isolation and tend to contradict each other. I don’t understand why the police, being fully aware that the Department of Traffic is not issuing permits at the moment, will not accept a receipt in its place.
“They end up wasting our valuable time by unnecessarily detaining us. Added to that, we may be locked up and forced to pay a fine over such an issue.”