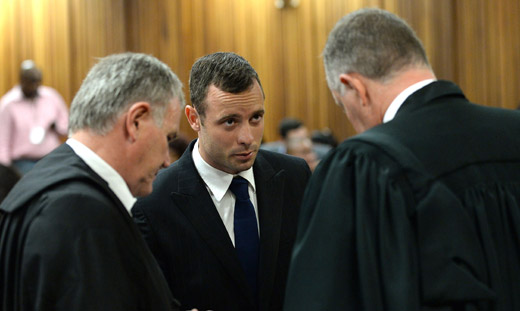 Day two of Oscar Pistorius’s murder trial ended with the State’s third witness recalling how he heard a woman’s desperate cries for help on the night the disabled athlete shot dead his girlfriend.

Charl Johnson’s testimony on Tuesday afternoon appeared to bolster the State argument that Pistorius was lying when he told the High Court in Pretoria on Monday it was “unfair and incorrect” that he had a row with Reeva Steenkamp before her death.

The paralympian, who wept in court on Tuesday, has pleaded not guilty to premeditated murder and maintained that he mistakenly shot Steenkamp through a locked toilet door, thinking she was a burglar.

All witnesses called by prosecutor Gerrie Nel so far, live in or next door to the security estate where Steenkamp was shot and described a disturbance followed by shots.

Johnson in chilling detail confirmed testimony given earlier by his wife Michelle Burger.

The couple, who live in a security complex bordering on the Silver Wood Country Estate where Steenkamp died, said they were woken in the early hours of February 14, last year, by a woman’s cries, then that of a man and a volley of gunfire.

He then got up and went to his bedroom balcony, where he heard more screaming, he told the court where Pistorius has pleaded not guilty to premeditated murder.

Johnson added: “I could hear she was in trouble… clearly distressed calls.”

The couple tried to call the security post of their complex, Silver Stream Estate, but mistakenly dialled a number at a previous address, he said.

“I then went back to the balcony and I heard the woman’s scream. The intensity and fear escalated and that’s when the first shots were fired,” said Johnson.

He said the last scream came after the last gunshot was fired.

Quizzed on how many shots he heard, Johnson said he initially thought five or six shots.

“I subsequently learned it was four,” he said.

Like his wife, he was adamant that he had heard the voices of both a man and a woman.

Most of the morning’s proceedings in court room GD were taken up by Pistorius’s defence lawyer Barry Roux trying to fault Burger’s testimony on this and other counts.

In relentless cross-examination, Roux put it to her that Pistorius’s voice rose when he was anxious, making him sound like a woman.

He said she heard only one person — the accused — cry out before the shooting, but that she was too biased against him to make the slightest concession that might play in his favour.

He also claimed Burger, an economics lecturer, had deviated from the written statement she gave police shortly after Steenkamp’s death but she refused to budge.

“My statement is a few pages long. I’ve been testifying for hours and I can explain the minute details to the court,” she said.

Later Roux also disputed Burger’s statement that the cries faded only after the shots, saying Steenkamp would have been too severely injured to scream at this point.

On hearing this, Pistorius broke down for the first time since the trial began on Monday. He held his head in his hands and cried, and accepted a tissue from a woman sitting with his family in the public gallery.

Also on Tuesday morning, another witness told the court she heard loud voices coming from the direction of Pistorius’s home on the night of the shooting.

Estelle van der Merwe, a neighbour of Pistorius in Silver Woods, said she was kept from sleep around 2am by what sounded like people fighting.

“It lasted for about an hour,” said Van der Merwe said, testifying in Afrikaans through a translator.

Like the married couple, Van der Merwe, asked not to be filmed or photographed at court, and while the rest of the proceedings have been broadcast live on television, their faces were not shown.

The court adjourned at 3pm on Wednesday. Johnson is expected back on the witness stand on Wednesday morning.