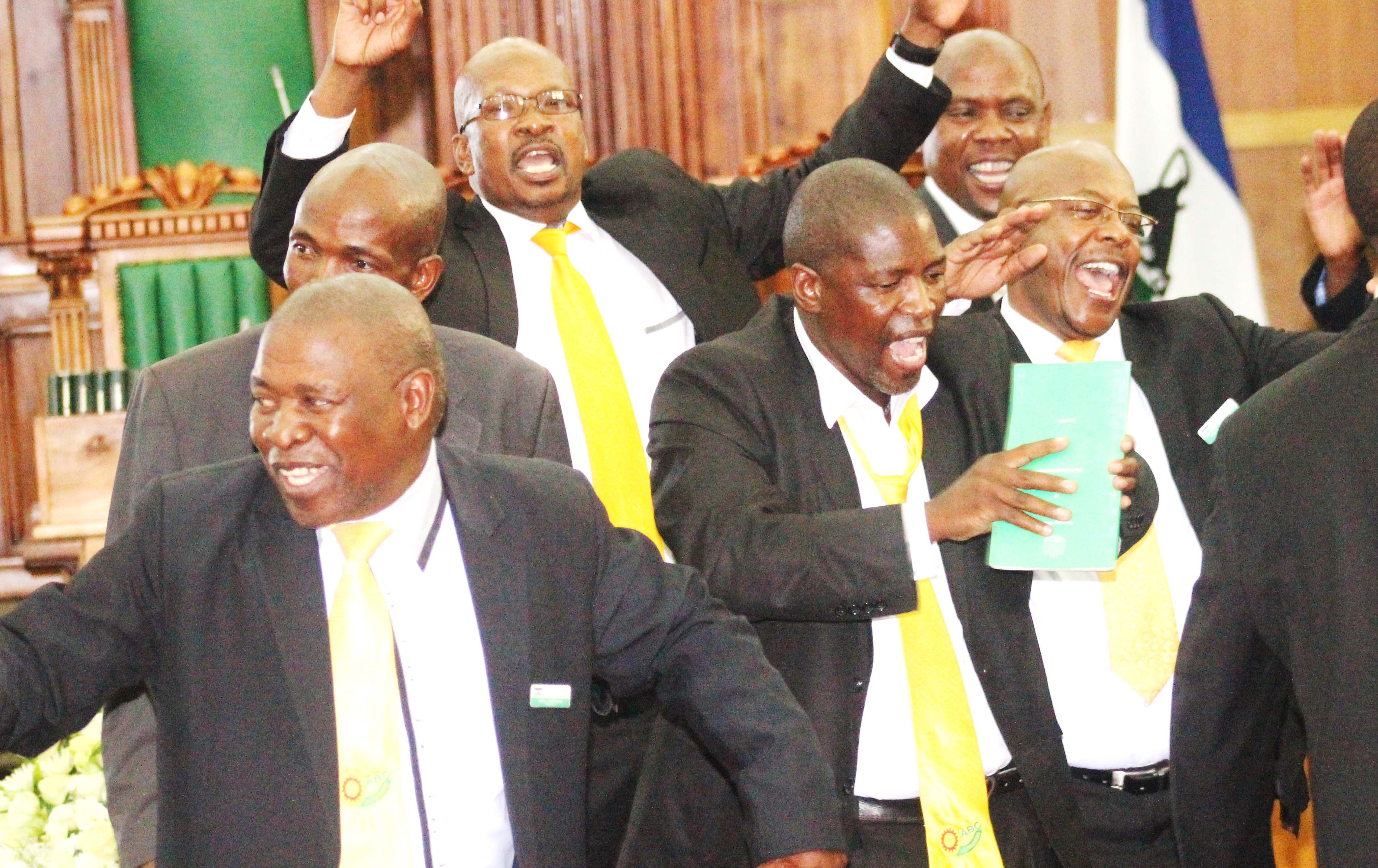 EXILED opposition leaders have accused National Assembly Speaker Ntlhoi Motsamai of being “undemocratic” for suspending four of the bloc’s Members of Parliament (MPs) after they disrupted proceedings in the august house.

Ms Motsamai suspended the MPs on Tuesday for heckling Prime Minister Pakalitha Mosisili as he tabled the SADC Commission of Inquiry report on Monday. Dr Mosisili was unable to finish his speech on Monday during the reopening of the National Assembly after opposition legislators broke into song and dance accusing the premier of doctoring the 62-page report.

In her reprimand to the opposition MPs, Ms Motsamai said she had been initially hesitant to take stern measures, but was left with no choice after they exhibited “un-parliamentary” behaviour.

She singled out Mafeteng MP, Temeki Tšolo, who had thrown the report on the floor the day before alleging that it had been “doctored”.

“Honorable Tšolo your behaviour was un-parliamentary,” Ms Motsamai said, amid howls of defiance from opposition MPs.

The National Assembly speaker’s plea for order was drowned out as the opposition MPs continued to interrupt as she was reprimanding them prompting her to order All Basotho Convention (ABC) MPs, Motebang Koma (Koro-Koro #42), Lesego Makgothi (Maseru #32), Chalane Phori (Qoaling #34) and Lehlohonolo Moramotse (Lithoteng #35), to immediately vacate the National Assembly for the remainder of that day’s sitting.

However, the suspended MPs continued to disrupt Ms Motsamai and question her ruling. The National Assembly speaker then decided to invoke the National Assembly’s Standing Orders which penalise MPs who “persistently and willfully obstruct” proceedings. She asked the leader of the house in parliament, Deputy Prime Minister Mothetjoa Metsing, to name the four MPs, as dictated by the Standing Order No. 50 (3) (a), so they could be suspended for the rest of the week.

Ms Motsamai then requested the House to vote on whether the MPs should be suspended to which the ruling parties MPs responded in the affirmative. Following the four’s ouster, other opposition also walked out of the House in solidarity with their colleagues.

However, ABC leader Thomas Thabane told the Lesotho Times this week that Ms Motsamai was “abusing” the Standing Order No. 50 to “oppress” opposition MPs.

“Lesotho’s National Assembly is a democratic House and must be treated as such. I don’t agree with Ms Ntlhoi or the leader of the House (Mr Metsing) because it was undemocratic to suspend MPs for raising queries,” Dr Thabane said.

Reformed Congress of Lesotho (RCL) leader Keketso Rantšo chipped in by taking a swipe at Dr Mosisili, whom she accused of trying to hide the report by only tabling it in Parliament and not publishing it to the nation.

“Ntate Mosisili was not supposed to table the report to MPs because he did not report to them when he asked for SADC’s intervention,” she said.

“The SADC communiqué (from the bloc’s double troika summit in Gaborone, Botswana last month) clearly instructs Ntate Mosisili to publish the report to the nation and not to politicians.

“When will he table the report to the chiefs, civil society organisations, church leaders and non-governmental organisations?”

“Not so long ago, when the Democratic Congress (DC) was in opposition, MPs disrupted proceedings in the House and scornfully sang the national anthem,” the RCL leader said.

“Motsamai and Ntate Mosisili want the noise when it suits them. When Motsamai crossed the floor to join the DC in the 7th parliament on 28 February 2012, it was a very noisy affair. The DC was formed in that noisy environment yet she was never suspended.”

On his part, Basotho National Party (BNP) leader Thesele ‘Maseribane said he had thought that the government delayed tabling the report to allow Basotho in exile to first return home.

“I thought the postponement in publishing the report from 1 to 8 February 2016 was meant to enable the government to create a conducive environment for the safe return of all Basotho in exile,” he said.

“If Ntate Mosisili facilitated our safe return to Lesotho, we would assess the report together and help him implement its recommendations. However, since the government led by Ntate Mosisili is not trustworthy, their focus was only on editing the report and nothing else.”

Asked about when the opposition bloc would publish their “authentic” version of the report, Chief ‘Maseribane said they were yet to discuss on the matter and would announce the date after consultations.

Govt to pick and choose from report: PM