Tokyo (AFP) – A typhoon described as the “strongest in 10 years” closed in on Japan on Wednesday, on a path that will take it towards the precarious Fukushima nuclear power plant.

Tokyo and surrounding areas were hit by violent winds and heavy rains in the early hours of Wednesday morning as Typhoon Wipha moved northeast off the coast of central Japan.

Thousands were evacuated from their homes in the neighbouring prefecture Chiba and power outages were reported.

Record rainfall of around 118.5 millimetres (4.7 inches) per hour was recorded on Izu Oshima Island, which lies in the Pacific, 120 kilometres (75 miles) south of central Tokyo, the Japan Meteorological Agency said, according to Kyodo news agency.

Three homes on the island had been washed away by a swollen river, Kyodo reported, citing police.

The weather bureau warned the typhoon could make landfall in the densely populated Kanto region, which includes Tokyo, later in the morning.

Typhoon Wipha, packing winds of nearly 200 kilometres (125 miles) per hour near its centre, was moving northeast at around 55 kilometres per hour in the early hours of the morning, Kyodo said.

The typhoon was forecast to be off the coast of Fukushima later in the day, where the crippled nuclear power plant sits, with the area already experiencing heavy rainfall on Tuesday. 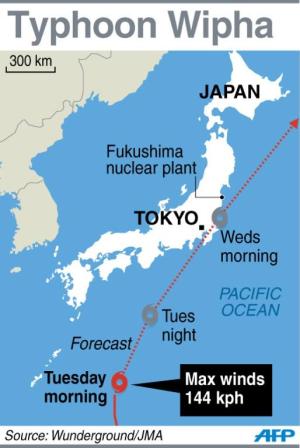 Graphic showing the projected path of Typhoon Wipha in Japan, as it moves north towards the Fukushim …

“It is the strongest typhoon in 10 years to pass the Kanto region (Tokyo and its vicinity),” Hiroyuki Uchida, the weather agency’s chief forecaster, told a news conference on Tuesday.

“It is expected to have a great impact on the traffic systems in the metropolitan area during commuting hours,” he said.

Japanese airlines announced the cancellation of 500 flights on Wednesday, while 30 high-speed trains and 100 other trains were cancelled, rail companies said.

Automaker Nissan said it had told employees across Kanto to stay at home for the morning to ride out the storm.

Schools have also asked students to stay at home.

As the weather agency issued warnings of torrential rain and strong winds, the operator of the Fukushima plant, Tokyo Electric Power Co. (TEPCO), said it was bracing for the storm after a series of leaks of radiation-polluted water.

“We are making preparations for proper management of contaminated water…. We will patrol places that could have inflows of water (from the storm),” a company spokesman said. 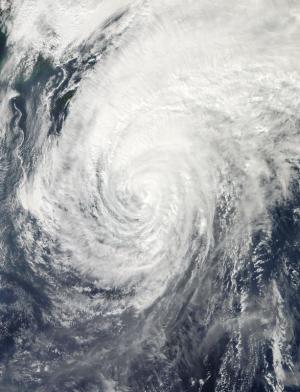 Cables and hoses have been bundled together, while ground and off-shore works have been halted, he said.

Earlier this month the company announced 430 litres (114 US gallons) of polluted water had spilt from a tank as workers tried to remove rainwater dumped at the plant by recent typhoons.

It has admitted contaminated water may well have flowed into the sea.

Japan’s atomic watchdog summoned the president of TEPCO for a public dressing-down for sloppy standards at the plant after the incident.

The nuclear plant was badly damaged by the tsunami that hit in March 2011. Critics say it remains in a fragile state and at the mercy of extreme weather or other natural hazards.

In Vietnam Tuesday, Typhoon Nari wreaked havoc across the centre of the country, killing five people, adding to the 13 lives the storm had claimed in the Philippines.

Residents said it was the biggest typhoon since 2006, when Typhoon Xangsane barrelled through the region, killing some 250 people in the Philippines and Vietnam.

Flag carrier Vietnam Airlines said it had cancelled a total 22 flights to and from Hue and Danang city on Monday and Tuesday morning, leaving many tourists stranded.

Before Nari struck, Vietnam evacuated more than 120,000 people to makeshift shelters in public buildings away from vulnerable coastal areas, according to the country’s disaster authorities.

The fear and fury of the mothers of Diepsloot