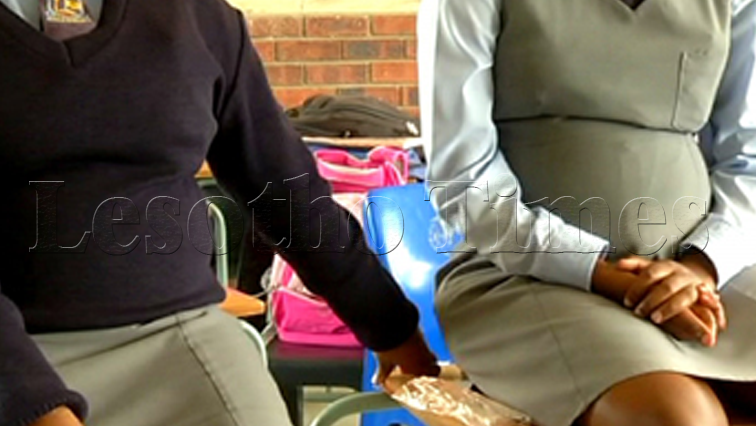 AT least 250 learners at ‘Maseribane High School in Quthing fell pregnant in 2018, a shocking National Security Service (NSS) report to the Ministry of Education and Training reveals.

What is even more shocking is that the school has a total enrolment of 1000 learners including boys and girls. This means that more than a quarter of the learners fell pregnant in one year alone.

The confidential report was submitted to the office of the Education minister, Professor Ntoi Rapapa barely a year after the United Nations Education, Scientific and Cultural Organisation (UNESCO)’s situational analysis report listed Lesotho among the leading countries on early and unintended pregnancies.

The UNESCO report shows that six out of 10 girls (60 percent) aged 15 to 19 in Lesotho are mothers or pregnant with their first child. This makes Lesotho is second to Namibia (seven out of 10 girls) when it comes to high rates of unintended pregnancies in eastern and southern African (ESA) countries.

“At least a third of early pregnancies are unintended in this age (15 to 19) group in all countries. Respondents at all levels (national, school and community) acknowledged the high prevalence of early and unintended pregnancies (EUPs) in their communities. Furthermore, EUPs were reported to be on the increase, with girls getting pregnant as young as 14 years,” the UNESCO report states.

While the report does not specify the rural areas where the early pregnancies are most prevalent, the Lesotho Times this week learnt that the Education ministry received a shocking intelligence report alerting it of the situation at Maseribane High School in Quthing.

“The Ministry of Education has received a shocking intelligence report indicating that 250 girls fell pregnant in 2018 alone, in one school for that matter,” a government source told this publication.

“How do you explain a situation where a school of slightly over 1000 learners, inclusive of boys, have 250 girls falling pregnant in one year except that early and unintended pregnancies have reached crisis proportions in Lesotho? We cannot just turn a blind eye to this issue if we are really serious about the rights of girl children,” the source said.

Another source said the confidential NSS report had shocked Prof Rapapa and his ministry officials, adding they were now working flat out to devise a results-orientated approach to curb the shocking phenomenon of EUPs.

“Fortunately, the minister is passionate about this issue and wants the country to curb EUPs. But he (Prof Rapapa) is aware that it is not going to be a walk in the park. He is aware that poverty has played a significant role in the rise of EUPs in Lesotho and is constantly encouraging officials to come with practical strategies to deal with this crisis for good.

“Everyone who has seen that report is shocked to the core that a school of slightly over 1000 learners, boys included, experienced such a huge statistics of 250 girls falling pregnant in one year. It is a worrying development and the minister is shocked,” the source said.

Yesterday, NSS Director Pheello Ralenkoane said he would only comment on the existence of the NSS report after speaking with his staffers.

“I have three meetings today (Wednesday) but I will do my best to get details on the matter and revert to you because I cannot whether there is such a report without making inquiries. However, I think the Ministry of Education is best placed to talk to about this matter,” Mr Ralenkoane said.

Prof Rapapa said he was in a meeting when the Lesotho Times sought comment from him. He did not respond to subsequent messages sent to his mobile phone.

He however, told a recent meeting in Johannesburg that poverty and economic inequalities contributed immensely to the increase of EUPs in Lesotho.

“If you look at the statistics of Lesotho, 90 percent of the affected girls come from low income families. Therefore issues around poverty have to be addressed,” Prof Rapapa said.

He also said that together with the health ministry, they had implemented a schools health and nutrition policy to feed learners as part of efforts to eliminate EUPs in Lesotho. Prof Rapapa also said that they had begun capacity building programmes to equip school boards, the police and communities to participate in the protection of female learners.

“We have also introduced a Comprehensive Sexuality Education (CSE) course. The CSE is compulsory from Grade 4 through to secondary school and starting next year, there will be a compulsory examination in CSE.”

Prof Rapapa spoke as one of the panelists at the recent launch of the LetsTalk, Pregnancy at the right time campaign hosted by UNESCO and other development partners in Johannesburg. Others ministers who attended the event were Botswana’s Poppy Bridget John (Education), Kenya’s Stephen Kaliti (Health) Namibia’s  Ayesha Wentworth (Education), South Africa Angelina Motshekga (Basic Education) and the Zimbabwean duo of Tariro Chipepera (Women Affairs and Gender) and Edgar Moyo (Deputy Minister of Primary and Secondary Education).

The launch was preceded by a capacity building workshop for print and broadcast journalists on EUPs.