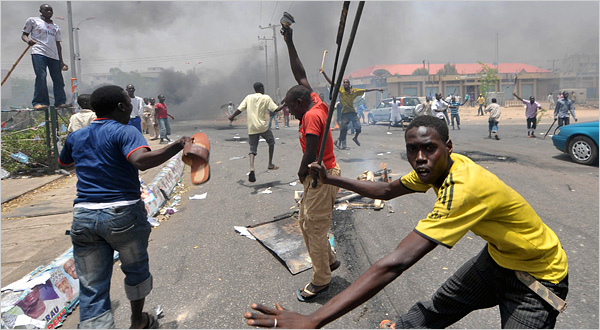 The reason they convened a National Conference to discuss Nigeria’s future last week is that it’s the 100th anniversary of the unification of the northern and southern protectorates into one nation.

Well, one colony, actually, since the whole place would remain under British rule for another half-century. And the one subject the delegates are banned from discussing is whether unification was really such a good idea.

It was an excellent idea from the viewpoint of the British colonial administrators, of course. Not only was it tidier, but it crippled resistance to British rule. When you force 500 different ethnic groups, with as many languages, into a single political entity, they will spend more time fighting one another than the foreigners. Even Nigeria’s name was invented by the British.

A century later, the country is still riven by ethnic and religious divisions that distort both its politics and its economy. Nigeria is one of the world’s biggest oil producers, but two-thirds of its 170 million people live on less than US$2 a day and even the big cities only get electricity four hours a day. It ranks 144th on Transparency International’s Corruption Perceptions Index, which means in practice that most public funds are stolen.

In the mainly Muslim north, an extremist Islamic insurgency by a group called Boko Haram (“Western Education is Forbidden”) killed more than 1 300 people in the first two months of this year.

Or rather, they and the brutal and incompetent army units who respond to their attacks with indiscriminate violence together accounted for 1 300 lives.

And when Lamido Sanusi, the internationally-respected head of Nigeria’s central bank, accused the Nigeria National Petroleum Corporation (NNPC) of failing to repatriate US$20 billion (about M21 billion) of the US$67 billion received for oil sales between January 2012 and July 2013, President Goodluck Jonathan suspended him for “financial recklessness and misconduct”.

“Failing to repatriate” actually means that the money stayed abroad and disappeared into the foreign bank accounts of powerful Nigerians. This is normal: it has been estimated that two-thirds of the US$600 billion that Nigeria has earned in the past 50 years from selling its oil was lost to corruption by the political and business elite.

What was unusual was for a member of the elite to challenge the practice openly.

Sanusi, who was named Central Bank Governor of the Year in 2010 by Banker magazine, was promptly accused of links to Boko Haram in a document circulated to Nigerian websites that was traced back to President Jonathan’s social media adviser. It was a typical establishment response, and it was total nonsense.

But a depressing number of southern Nigerians will believe almost anything about Sanusi simply because he is a northern Muslim.

He is actually a member of the northern aristocracy — his grandfather was the emir of Kano — and an Islamic scholar who condemns Wahhabist fundamentalism. He is one of Nigeria’s foremost advocates of a tolerant, inclusive Islam: “Even a cursory student of Islamic history knows that all the trappings of gender inequality present in the Muslim society have socio-economic and cultural, as opposed to religious roots,” he said recently.

Yet, the mistrust between Muslims and Christans, northerners and southerners, is so great that Sanusi’s whistle-blowing is seen by many southerners as a political operation aimed at the Christian president.

They believe this even though they also know that the money really was stolen by people at the NNPC, and that Jonathan is protecting them because some of it was going to be used to finance his re-election campaign next year.

And why does Jonathan need so much money?

To buy the support of the northern power-brokers, who will then deliver the votes to keep him in the presidency. Then he will be able to go on protecting his friends. It’s a closed system, and it’s making Sanusi more radical by the moment.

Recently, he told the Guardian: “If the population as a whole starts protesting what is going on in our country, how many of them can they kill?”

He added that the ousted leaders of Ukraine and the Arab spring nations “never did half as much damage to their countries as our rulers have”.

But Sanusi is unlikely to bring the system down. That is why, at the National Conference on Nigeria’s future that meets in Abuja over the next three months, some people will certainly defy the ban and start talking about redividing Nigeria between north and south.

They will mostly be southerners, who resent the large amounts of oil income that the federal government transfers to the northern states that desperately need the money.

Northerners will fiercely resist the idea of partition because they would be left running a country only slightly better off than Mali. (Despite the transfers of oil revenue, 72 percent of the population in the North lives in poverty; in the South, only 27 percent does.) And in the end, nothing will happen, because cutting off the North would spoil the game.

Nigeria is unquestionably the most dysfunctional large country in the world, but it will hang together because all the elites benefit from the dysfunction, which allows them to steal massive amounts with complete impunity. Indeed, you might say that Nigeria survives because it is dysfunctional.