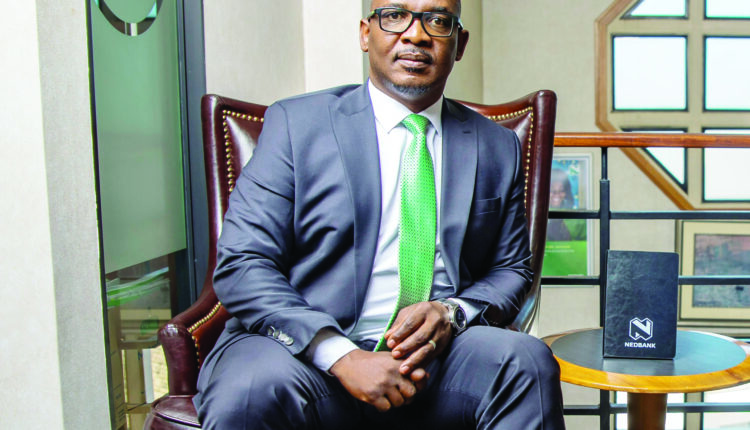 THE Central Bank of Lesotho has advertised for a new governor following the expiry of the incumbent, Retšelisitsoe Matlanyane’s contract on 31 December 2021.
In the meantime, Mr Lehlomela Mohapi has been appointed acting CBL governor. (See story on Page 14). This week, Lesotho Times (LT) editor, Herbert Moyo, engaged Nedbank Lesotho managing director, Nkau Matete, who outlined his views of an ideal permanent CBL boss. Below are excerpts of the wide-ranging interview wherein Mr Matete also discusses various issues including the country’s economic prospects for 2022.

LT: What are your views on the just ended year from an economic perspective?

Matete: It was a very tough year. In January 2021, the country was hit hard by the Covid-19 pandemic due to the influx of people who had come home for the 2020 Christmas holidays from South Africa.
As a result, we started 2021 with a hard lockdown which was not good for the economy as there were restrictions on many economic activities and a ban on cross-border travel.
Fast forward to May and June 2021, we had a massive industrial action by textile workers who were demanding higher wages. This resulted in a month-long period of non-production in the textile industry. These two events dictated how the rest of the year would pan out.
Our economy also depends on the Southern African Customs Union (SACU) revenues and if there is no free movement of people and goods across the border because of the lockdowns, that means the kitty from the SACU revenue pool will also be impacted. Projections for our gross domestic product (GDP) growth were around 3, 7 percent but due to the situation on the ground, it is doubtful whether that will be achieved.
What was therefore left as the big hope was the second phase of the Lesotho Highlands Water Project (LWHP II) which was able to advance beyond the advance infrastructure construction. So, the LHWP II made a significant injection into the country’s economy despite encountering some setbacks when some of the newly constructed structures were swept away by the torrential rains at the time.

LT: How was the year for the banking sector in general and for Nedbank in particular?

Matete: Overall, the financial sector performed better than the year before. However, ours is an interesting sector which can be severely impacted by the collapse of a single corporate client.
We had that misfortune when one of our clients in the mining industry collapsed. That really set us back.
On the retail side, we met almost all the benchmarks and that was one good thing for us. This helped off-set the loss incurred after the collapse of the big client. Recovering what we are owed by our big client will take time as the matter has to be dealt with in the courts of law. It has to be noted that the Commercial Court was dysfunctional in 2021 due to the lack of judges.
This meant that all commercial disputes were not resolved as they had to be placed in the queue along with criminal cases in the High Court. This affected businesses a great deal. With the swearing in of two judges, including one for the Commercial Court towards the end of 2021, we expect the situation to improve going forward. But as you can imagine, a whole year without progress in the Commercial Court means that there is already a huge backlog of cases to be cleared.
A silver lining from the Covid-19 experience was that it forced the banking industry to fast-track the digitisation of services. The increased collaboration between mobile network operators (MNOs) and banks are some of the legacies of the Covid-19 era. This has enabled people to maintain social distancing by working from home via the digital solutions that were developed to mitigate the impact of the pandemic.

LT: Since MNOs now offer financial services especially for the lower end of the market, do you view them as competitors and how have they affected the banks’ operations and profitability?

Matete: In terms of the share of the wallet, we cannot ignore MNOs as competitors. But I choose not to see them that way. I see them as bringing a different perspective and bringing an opportunity which never existed before. MNOs are slightly faster in terms of innovation than conservative banks. That flexibility and fast pace forces the banks to follow suit.
Mobile money operators innovate faster than banks and collaborating with them has enabled us to make progress in certain areas. I really think partnership and collaboration is what will define the relationship between conventional banks and MNOs.

LT: What areas of partnership have happened between banks and mobile money operators?

Matete: We launched a partnership that enabled people without bank accounts to get their money through the banking system. These people can now use our ATMs to receive money that has been transferred to them via their mobile phones. Banks have a network of ATMs around the country but MNOs do not have them. So, we are partnering with MNOs for their clients to withdraw funds at our ATMs.

LT: Looking forward to 2022, what are the economic prospects for the country and Nedbank?

Matete: I will refer back to the LHWP II since it is by far the largest construction project in the country. What we saw over the past two to three years was construction of the advance infrastructure.
In the 2022/23 financial year, we anticipate the actual dam construction. So we are talking huge figures in terms of the funding for the project and also in terms of employment of our people. I believe the mining sector will also be among the key economic drivers after holding its own against Covid-19 in 2021.
The services sector will also be significant, including the banks and telecommunication services. This sector is dependent on the primary and secondary sectors. If there is movement in those sectors then the services sector will also be vibrant.
I still believe that agriculture will also be key to economic growth. We have received lots of rains so far and we can expect more people venturing into that space. The encouraging aspect is that youths are starting to venture into agriculture.

LT: What is the likely impact of the upcoming general elections on business? What do you think the political leaders should do to provide the much-needed support to business?

Matete: For a long time, business has decided to ignore the political landscape. A lot of people have put their focus into growing their businesses rather than taking interest in government affairs. So, if there is anything that our government and political leadership need to do; it is to provide stability. We hope the elections will provide stability because certainty is key to decision-making in business. You want to be sure that the political leaders you are dealing with will be in power for the five years. Having said that, I am not that optimistic of stability being achieved. I think there will still be coalitions after the elections.

LT: The employment contracts of the governor and deputy governors of the Central Bank of Lesotho (CBL) were allowed to run down without any successors being lined up to replace them. Was that the right way to go about it?

Matete: It was unfortunate to have the employment terms of the governor and the deputy governors ending at the same time. I blame it on our politics because if there was stability, there would have been a proper succession plan.
However, this provides an opportunity to review the institution and bring in someone with fresh ideas.
It is also interesting to note that for the first time the post of CBL governor is being advertised as opposed to the usual system where the governor was nominated by the prime minister for appointment by the King.
In my own view, a good candidate for CBL governor should be someone who understands business so that they will also focus on how to solve the funding needs of the country instead of just policing financial institutions.
We need someone with an entrepreneurial mindset in that position to help businesses to unlock opportunities. In my view, the central bank should not only be about regulating banks but also enabling the entire financial sector to play a role that fosters growth in the economy.

LT: Mr Lehlomela Mohapi has been appointed as acting governor of CBL. What is your take on his appointment?

Matete: Mr Mohapi is an experienced economist and also the director of research at CBL (See story on page 14).
Therefore, he has a good institutional memory of the CBL. I would not look anywhere else for someone to stabilise the institution while awaiting a substantive governor. I have full confidence in Mr Mohapi, and we will offer him our usual support.

No going back on mandatory vaccination of employees: Majoro