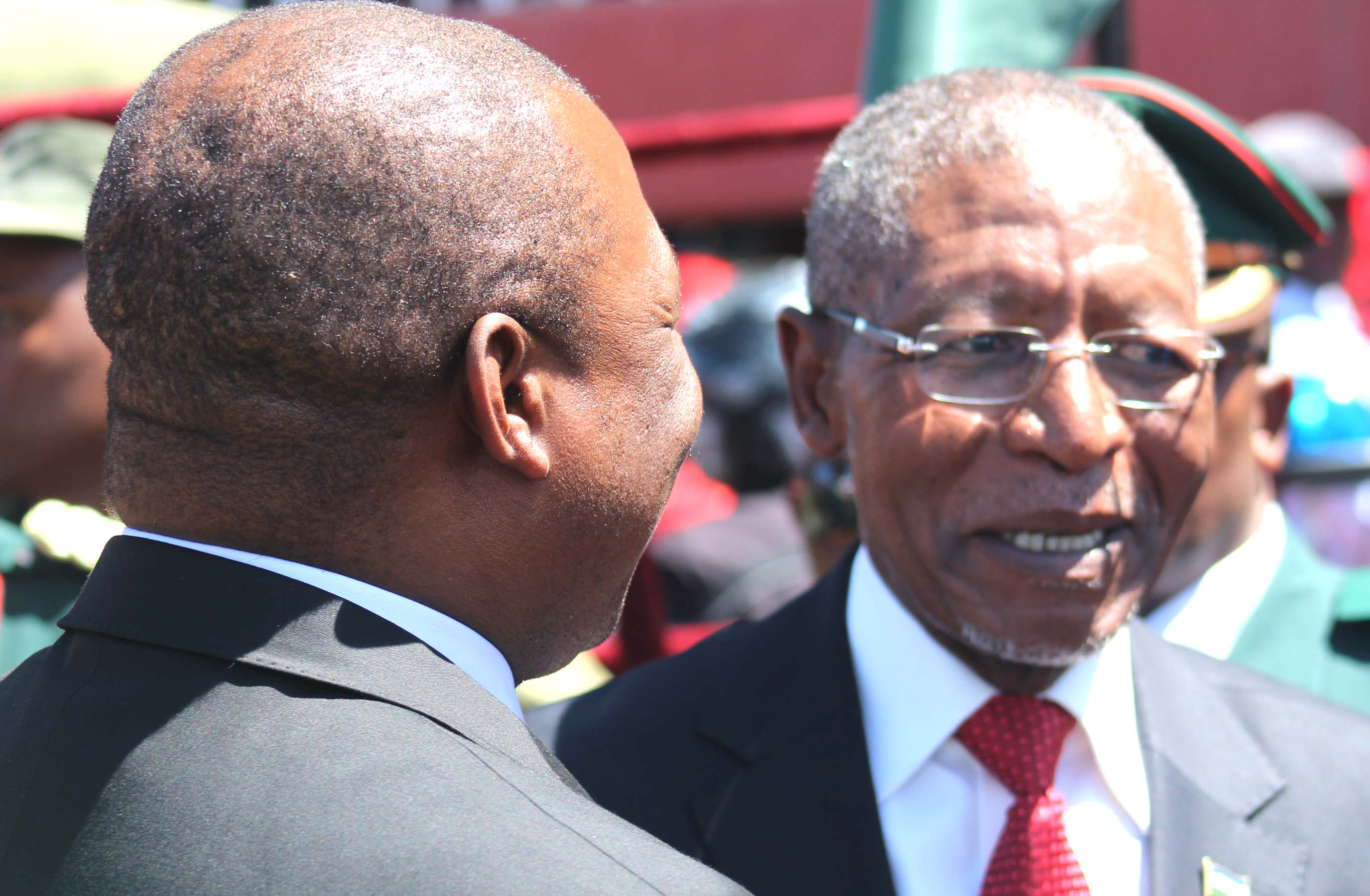 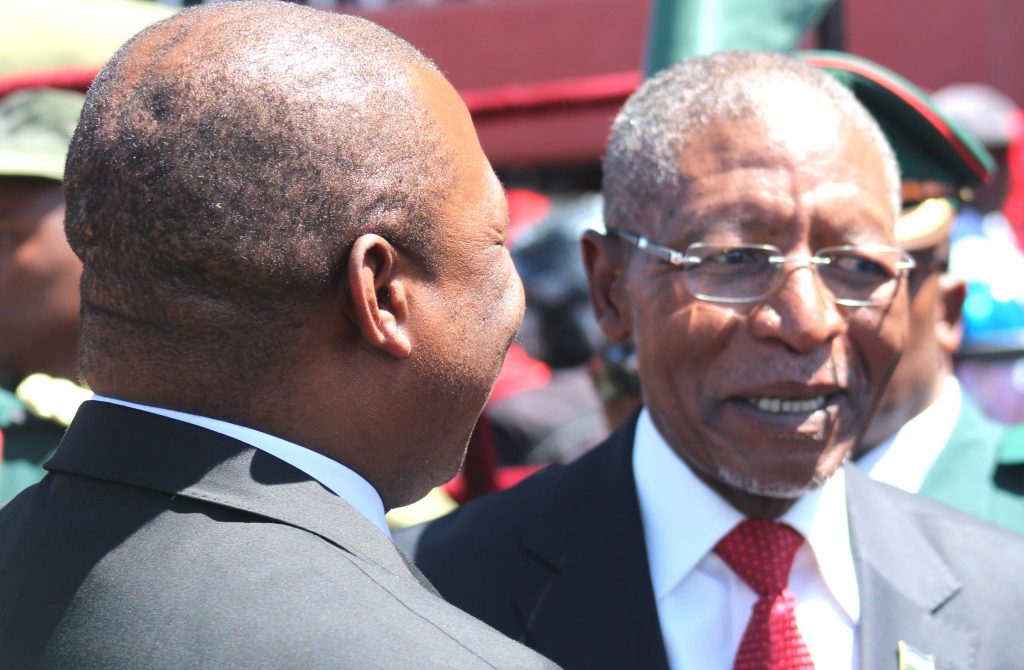 PRIME Minister Pakalitha Mosisili and his deputy, Mothetjoa Metsing, will not be in charge of any ministries when a new cabinet is announced next week, sources privy to the matter revealed yesterday.

According to the sources, the two leaders would not be “burdened” by ministerial posts that could “interfere” with their “supervisory” roles of ensuring an effective government.

The sources further said the swearing-in ceremony of the ministers, which had widely been believed to be scheduled for today, would “most likely” take place next Wednesday as the seven-party government, which came to power after the 28 February snap election had resulted in a hung parliament, is still haggling over ministerial posts.

The party leaders are also said to be debating whether increasing the ministries from the current 23 to 26 would be feasible.  The ministries, the sources added, could see the Gender and Youth, Sports and Recreation; Education and Training, as well as that of Public Works and Transport being split, thereby increasing the size of the government.

The sources said DC leader Mosisili, who was sworn-in as premier on Tuesday this week, had since agreed with LCD leader Metsing on their “new-look” government they are determined to succeed in order to prove their “detractors” wrong.

“The issue of the prime minister and his deputy not holding any ministerial posts has been done and dusted; it has since been agreed upon. However, increasing the ministries has now become one of the sticking points in the discussions between the seven parties because each leader would want to look out for his own people by giving them top posts,” said one of the sources.

According to the source, the Democratic Congress (47 seats), as the senior party in the coalition and with its previous experience in government, was not making “much of a fuss” on the whole issue, while its smaller partners that contributed the least seats, namely Morematlou Freedom Party (one seat), Basotho Congress Party (one seat), National Independent Party (one seat), Lesotho People’s Congress (one seat) and Popular Front for Democracy (two seats), are allegedly making the most “noise” in the horse-trading. The seventh party in the alliance, the Lesotho Congress for Democracy (12 seats) that was part of the outgoing government which also comprised the All Basotho Convention and Basotho National Party, is said to be taking a “wait and see” attitude and keenly observing the DC manoeuvres in the whole process, the source added.

On the issue of the premier and his deputy, the source said the duo would be closely monitoring the ministers and crack the whip if any of them fail to live up to their responsibilities.

“The two would have free roles to supervise, hence the decision not to give them any ministries; they would just be like the principal and his deputy at a regular school. Again, this also ensure the ministries they were supposed to lead, would be allocated to others, thereby solving this problem of having certain individuals complaining that they have been overlooked for cushy ministerial positions, yet they contributed immensely in the party winning seats or a seat in the election,” added the source.

Asked when the new cabinet would be unveiled, DC Secretary General, Ralechate ‘Mokose told the Lesotho Times the exercise could not be completed “so soon” that the ministers would be inaugurated today, as widely reported by the media.

“The programme that is being talked about concerning the swearing-in of ministers was announced by the previous government, without considering that selecting appropriate ministers was a lengthy and rigorous process which needed time. It could not be done a day after the inauguration of the prime minister.

“There are so many things to be considered before cabinet is finalised, and the previous government appeared not to realise this, when it released the programme.

“The swearing-in of ministers will take place at the appropriate time and not tomorrow. It’s probably going to happen next week but again, I cannot be too sure of the exact day,” Mr ‘Mokose said.

On the other hand, PFD leader, Advocate Lekhetho Rakuoane, whose party is allegedly demanding two ministries by virtue of its two seats in the 65-seat alliance, was non-committal when contacted yesterday, and referred the Lesotho Times to the prime minister.

“I am not aware that the ministers’ inauguration was supposed to be tomorrow. To my knowledge, the selection process is not yet complete.

“I would advise you to consult the office of the prime minister for that kind of information,” he added.

Meanwhile, NIP leader, Kimetso Mathaba yesterday said he was surprised to hear that the public had expected cabinet to be unveiled on 19 March when the selection process had not even been concluded.

“I am truly surprised that people were given 19 March 2015 as the date for the swearing-in ceremony, while the coalition has not approved anything regarding the ministerial posts,” Mr Mathaba said.

“In fact, all the seven party leaders were supposed to meet today after lunch to discuss the issue. So basically, what it means is that the process is on-going and the nation would need to be patient while the issue is being thoroughly looked into to avoid making costly mistakes.”

LPC leader, Molahlehi Letlotlo, also said nothing had been agreed as yet regarding the composition of the new cabinet.

“We are busy making suggestions regarding the posts, so we cannot be talking about names here as well as how many ministries there would be in the new government,” Mr Letlotlo said.

Repeated efforts to get comments from the BCP and MFP were fruitless, while Government Secretary, Moahloli Mphaka, said the new cabinet was yet to be finalised. Last week, Mr Mphaka told the Lesotho Times that the ministers were likely to be sworn-in today, 19 March.

“The swearing-in of ministers will probably take place on Wednesday next week. When I spoke about the likelihood of the ministers being inaugurated tomorrow, Thursday, the information was based on a schedule that was put in place by the previous government,” Mr Mphaka said.