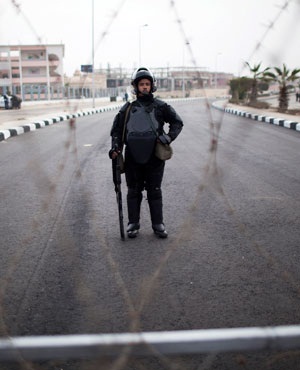 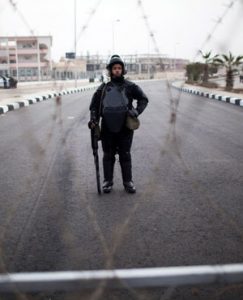 Cairo – Egypt’s deposed Islamist president is to go on trial on Monday on charges of incitement of violence and murder, in what will be Mohammed Morsi’s first public appearance since his ouster in a coup on 3 July.

The trial is fraught with risks and comes amid a highly charged atmosphere in a bitterly polarised nation, with a deepening schism between Morsi’s Islamist supporters in one hand and Egypt’s security establishment and the nation’s moderate Muslims, secularists, Christians and women on the other.

In a last-minute change, authorities on Sunday switched the location for Morsi’s trial, a move apparently aimed at thwarting mass rallies planned by the Muslim Brotherhood, a group from which Morsi hails.

Security was tight around the trial’s venue, a police academy in an eastern Cairo district, with hundreds of black-clad riot police backed by armoured vehicles deployed around the sprawling complex.

Several armoured vehicles were deployed too. The final stretch of road leading to the academy was sealed off, with only authorised personnel and accredited journalists allowed to approach the facility.

The academy is also being used for the trial of another former president – Hosni Mubarak – toppled in a 2011 uprising. He is accused of failing to stop the killing of protesters.

Since his ouster in the July popularly-backed coup, Morsi has been held at a secret military location with little communication to the outside world. He will likely represent himself in the trial, the first time public figure to do so in the host of trials of politicians since the autocrat Mubarak’s ouster, Brotherhood lawyers have said.

Morsi will also likely use the platform to insist he is still the true president of Egypt, question the trial’s legitimacy and turn it into an indictment of the coup, further energising his supporters in the street.

During four months of detention, Morsi has been extensively questioned and has not been allowed to meet with lawyers. Virtually his only contact with the outside world was two phone calls with his family.

Brotherhood supporters have called the detention an outright kidnapping, and Morsi has refused to co-operate with his interrogators.

When the trial opens on Monday, Morsi will face charges along with 14 other Brotherhood figures and allies – including top leaders Mohammed el-Beltagy and Essam el-Erian – in connection to clashes last December outside his presidential palace that left at least 10 dead.

Unlike Mubarak’s trial, the proceedings against Morsi are not likely to be aired live and the former president will probably be taken back to the place he has been held instead of being transferred to a normal prison after the first session, for fear his supporters would turn the prison into a “focal point of endless protests”.

After the coup, Egypt has witnessed one of its worst bouts of violence in decades.

Since then, violent incidents have multiplied: a suicide car bomber tried to assassinate Interior Minister Mohammed Ibrahim in September, and dozens of members of the security forces have been killed in a string of drive-by shootings, explosions and car bombs.

Churches have been torched, and in an attack in Cairo last month, five Copts and one Muslim were killed in drive-by shooting at a church.

Both government officials and Morsi’s supporters forecast bleak scenarios for Monday, with each side accusing the other of plotting killings, including that of Morsi himself.

A Brotherhood-led group has called for mass rallies, while the interior minister has ordered the deployment of large numbers of security forces to guard the trial venue.

Meanwhile, a newspaper known for close ties to the military published on Sunday what appeared to be the first pictures of Morsi from his detention.

Daily el-Watan published a transcript of remarks it says were made by Morsi and captured on video, describing him as being “in total denial” and saying “I am the president of the republic, in accordance to the constitution”. Later in the day, it posted a video showing Morsi wearing a blue track suit, sitting on a chair and speaking calmly

The paper quoted him as saying: “I will represent myself in front of any court … I am not involved in killings of the protesters … I will tell judges that”.

A military official said the video was leaked to the paper in order to give his supporters a first glance of the former president to lessen the impact of the shock of his first public appearance.

International rights groups have called for fair trial for Morsi.

In a Sunday statement, London-based Amnesty International said Morsi’s trial is a “test” for the Egyptian authorities, who must grant him the “right to challenge the evidence against him in court,” said Hassiba Hadj Sahraoui, Amnesty’s Middle East director.

Morsi’s family considers the trial illegitimate and will not attend, his son Osama told The Associated Press. Awad said they feared they would be mistreated and humiliated.

Germany may ask Edward Snowden to be witness in NSA inquiry