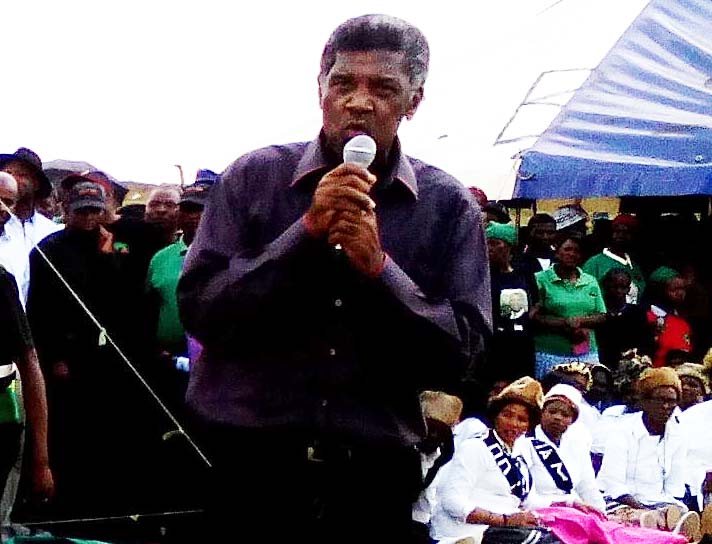 Mr Moleleki told guests attending Mr Metsing’s belated 49th birthday party in Mahobong in Leribe district that the Lesotho Congress for Democracy (LCD) leader was one of the “strongest pillars” of the coalition government and even if he had “haters”, the DC and the other six parties in government “love” him.

Mr Moleleki has widely been seen as Mr Metsing’s archenemy, with the alleged rivalry said to have started when both were still members of the LCD before the party split in 2011, giving birth to the DC.

However, in his address at the birthday celebration attended by a huge crowd of about 7000 predominantly LCD supporters, Mr Moleleki gave no hint whatsoever of the alleged rivalry and instead, heaped praise on the deputy premier.

Speaking in parables, Mr Moleleki said every tent was supported by “two big pillars” in reference to DC leader and Prime Minister Pakalitha Mosisili and Mr Metsing. Mr Moleleki added there were smaller pillars that also supported the tent. The police minister said he was happy to be one of those smaller pillars.

“Every tent has pillars to support it; some are small and Ntate Metsing is one of the big ones.

“We have this good government in place now because of him; he is one of the big pillars that are supporting this tent of Lesotho,” Mr Moleleki said.

“We are very grateful for Ntate Metsing’s life because whether you love or hate him, it is an undisputed fact that he is one of the big pillars this government is leaning on. And should he be shaken, all those leaning on him would fall.

“As for me, I am just one of the smaller pillars that surround the two big ones.

“Those who hate this good, sturdy government can be very angry and question why this pillar is supporting this tent. They can even demand that it be dropped so that the tent can collapse on those sitting inside it.”

Mr Moleleki said everyone loved sitting under the tent “and for that reason, we are all gathered here to celebrate Ntate Metsing’s life because he is the mainstay of the government”.

He continued: “On behalf of my leaders and your partners in the coalition, we are very happy and thankful for your life. You should know that even if you have haters, we love you.”

Mr Moleleki also spoke about “rumours” that he was not happy that Mr Metsing, and not him, had been appointed deputy premier.

“I am very sane and no one could be happier than me for not being the deputy prime minister,” he said.

LCD general secretary, Selibe Mochoboroane, also praised Mr Metsing for his resilience. Mr Metsing’s bitter dispute with former prime minister Thomas Thabane led to the collapse of the previous government, and an early election in February last year. The LCD leader was Dr Thabane’s deputy but fell out after he accused the then premier of allegedly making unilateral decisions on key issues with a bearing on good governance.

“We see Ntate Metsing as our hero; a brave man who never chickened out to save the congress movement and Basotho at large when things became muddled in the previous government.

“Next year, these celebrations are going to be bigger as he will be commemorating his 50th jubilee. Long Live Our Leader!”

LERIBE-Deputy Prime Minister Mothetjoa Metsing says his greatest wish is for peace to prevail in Lesotho.

The Lesotho Congress for Democracy (LCD) leader made this very clear in his brief address as he celebrated his 49th birthday in Mahobong on Sunday.

“This celebration is meant to unite the LCD and should this be enough to make us the salt of our earth, let this be the beginning towards peace for our nation,” said Mr Metsing.

“I have seen that we have been joined here at this celebration by members of the Democratic Congress (DC) and other parties which form this coalition government. Let’s all go out there to the people and preach the message of peace. We are the government and it is befitting that we go and convey this message of peace to our brothers and sisters, that Lesotho should be a peaceful place to live in.

“But again, let’s not just preach about peace, let us be the servants of peace.”

The deputy premier also thanked the guests for celebrating his birthday in his birthplace.

“I know there is nothing special about me, I’m like the rest of you and am very humbled that you decided to join me and honour this day. We all know where we are coming from in this country’s politics, and we have seen God’s love and mercy on us. I therefore understand why you wanted to celebrate in this fashion,” Mr Metsing said.

As part of the day’s celebrations, 150 Mahobong families received food hampers, with 150 more set to be presented with similar gifts this week.