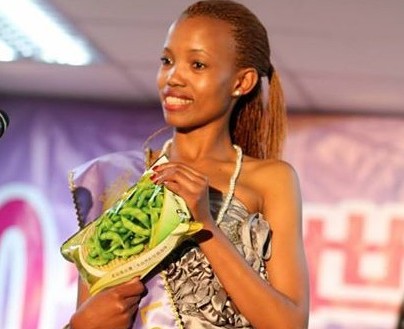 The Face of Beauty pageant, held in Taichung, Taiwan from 29 October till last Sunday, was launched in 2012 with the aim of empowering contestants to gain greater confidence in themselves through sharing knowledge, experiences and developing skills.

Mokotjomela, who works as a pharmacist at Tšepong Hospital, contested against models from 50 countries represented in the competition in the central Taiwanese city.

The Miss Friendship title was one of the prizes up for grabs for the top five contestants along with Miss Tourism Ambassador which went to Fiji, Miss Swimwear Miss Traditional Wear Myanmar, Miss Sports to New Zealand, Miss Talent to Taiwan, Miss Famous on Social Media to Australia, Miss Best Evening Gown.

The most sought after Face of Beauty 2014 crown was won by Gimena Ghilarducci from Argentina who also clinched the Miss Photogenic title.

Speaking to the Weekender this week following her return from the east Asian island nation, Mokotjomela said clinching the title caught her by surprise as the competition was very tight.

“I feel honoured and humbled to have won an international title and put my country on the map,” an enthused Mokotjomela said.

“As a first time entrant in an international pageant, I did not see it coming.”

The 23-year-old Mapoteng-born stunner, who is the current holder of the Face of Beauty Lesotho title, said the experience has totally changed her outlook on life as she gained confidence in herself.

“I also learned that for one to win a title she must not try to be someone else but stay true to themselves, and thus, reveal their true identity,” she said.

The Mapoteng-born stunner also revealed that her engaging in charity work for the Sunshine Foundation based in Taiwan by raising money to assist patients was another highlight of her trip.