Matsipa leads the way in the ‘green gold’ industry 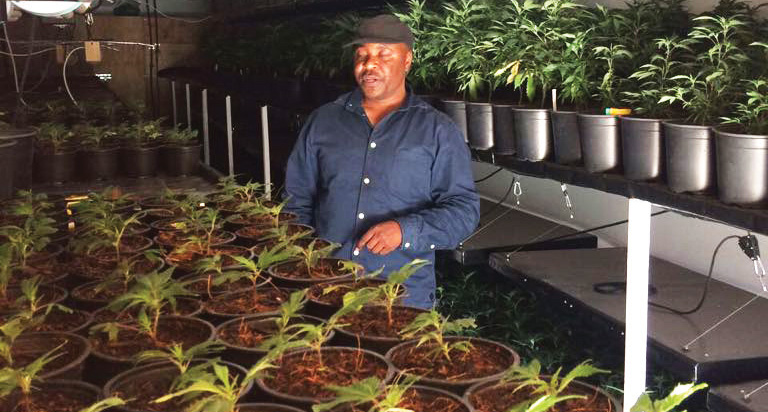 WHEN he was forced to drop out of school due to financial challenges, Bokang Matsipa plunged headlong into the underworld of the illicit cultivation and trade of marijuana.

This helped him make ends but never in his wildest dreams did he ever imagine that this would stand him in good stead to become one of the local pioneers of the potentially lucrative cultivation of medical marijuana.

Last year Lesotho wrote its own piece of history by becoming the first African country to legalise the cultivation of medical marijuana and almost immediately Matsipa carved his name into the annals of history as one of the local pioneers of the trade.

Zimbabwe may have followed Lesotho’s lead in legalising the growing of medical marijuana but as far as Mr Matsipa is concerned, this country will continue to be the torch bearer in the industry on the continent.

Mr Matsipa proudly sits as one of the directors of Medi Kingdom Holdings – a local company which he says is poised to become a market leader in the African medical marijuana industry. According to Mr Matsipa, the company made the first-ever shipment of medical marijuana also known as cannabis from Africa to Canada on 26 March this year.

And modesty is certainly not one of his virtues. In the manner of the fabled doyen of African literature, Chinua Achebe’s characters, Mr Matsipa is like “the lizard that jumped from the iroko tree and said I will praise myself even if no-one else does so”.

“Lesotho is one of the smallest countries in the world and the least developed for that matter,” the voluble Mr Matsipa says, adding, “But through my determination and hard work I have helped to make my country- which I am patriotic about- an African leader in cannabis production”.

“It had been known for centuries that cannabis could be used to heal various chronic diseases but then this green gold remained an untapped treasure in Lesotho.

“I feel I have liberated Lesotho and Africa for I exposed this multi-billion green gold. It is bigger than any mineral resource as its demand is very high and it will never run out because the whole world needs it to treat different diseases. I should be recognised for the leadership of this industry,” he demanded.

Born in 1973 in the small village of Letlope in the district of Qacha’s Nek, Mr Matsipa was raised by parents who struggled to fend for their children.

Thiers was a family of four siblings and four relatives from the extended family.

His mother was a street vendor and his father the area hospital driver. In 1989 when he was in Form A, his father lost the job, compelling the young Matsipa to drop out and help put bread on the table. He sold fruits in the streets and at times he herded the livestock of more prosperous neighbours.

Sometime in 1990 while herding livestock in the veld, some of his companions asked him to accompany them to sell illegal marijuana. His eyes popped wide when he saw them make M50 from a very small consignment. This was a lot of money back then.

“Although this plant was sold in secrecy, there was a lot of money to be made so I started my own trade.

“Even though my parents could not take me to school, I always wanted to be educated so I did a lot of research and was able to discover that marijuana could be used as a form of medicine. I then got a job at a local wholesale and after work would go to night school through which I managed to write my form C as well as Form E.

“The wholesale took me to various courses related to their trade until I became their stock control manager but then marijuana business remained my side job until 1998 when I quit the job to focus of the illegal trade which enabled me to build a house, buy a car and take my two children to school.”

Mr Matsipa said that in 2012 while visiting the-then Prime Minister Thomas Thabane to inquire about reports that the government was considering legalising the use of marijuana for medicinal purposes, he met “someone” who introduced him to some international investors and that led to the birth of Medi Kingdom.

“While visiting the Prime Minister, I met his South African guest his guest and as I extended my hand to greet him, some marijuana seeds fell from my pocket.

The guest simply asked for my contacts and he later called to say there were some overseas business people interested in investing in the production of medical marijuana only if Lesotho would allow that.

“I then consulted my lawyer friends and while we were preparing a strong argument to present to the government, I got another call this time from Italy, telling me that there was M70 million available for investment.

“In 2014, one Michael Hiller from Italy came to Lesotho and we engaged in research about the viability of growing the drug here. We tested the climate through a variety of seeds and discovered that the seed which is commonly used in Lesotho is not the right one for medical marijuana production. We had to import the right seed.

“Together with some experts from the United Kingdom, we approached the government and in 2015 we were granted a provisional licence to conduct our research. That was the time we also registered Medi Kingdom and developed a plantation in Qacha’s Nek. We were only given a proper trading licence in 2016.”

Medi Kingdom harvested its first crop in 2017 and in 26 March 2018, it exported 10 packages of medical cannabis to Canada for testing.

“On 26 March this year, we sent 10 packages of 850g samples to Canada for testing so that we can get further advice on how best to grow the plant. We are expecting the response anytime soon,” Mr Matsipa said.

Medi Kingdom is reportedly owned by nine Basotho, some of them principal chiefs as well as three international investors. The company has also attracted investment from the American company, Rhizo Sciences, which has invested in the upcoming construction of three export facilities in Maseru and Qacha’s Nek.

The facilities will include secure climate controlled greenhouses and an extraction and manufacturing plant.

Rhizo Sciences states on its website that it will design, build and manage the US$50M (M632 million) facility for Medi Kingdom. Rhizo Sciences will also purchase the entire production output of the facility, which will exceed 35 000kg of marijuana annually.

The partnership will enable Rhizo Sciences to meet the rising demand for medical cannabis products in Canada, Australasia, and Europe.

“This new facility will help us to accelerate patient access to safe, effective and affordable cannabis medicines. The ability to export medical cannabis internationally gives us unrivalled market access and positions Medi Kingdom and Rhizo Sciences as leaders in the emerging cannabis-derived pharmaceutical industry, which is projected to reach US$50 Billion (M632 trillion) in sales by 2029,” said Dallas McMillan, the president of Rhizo Sciences.