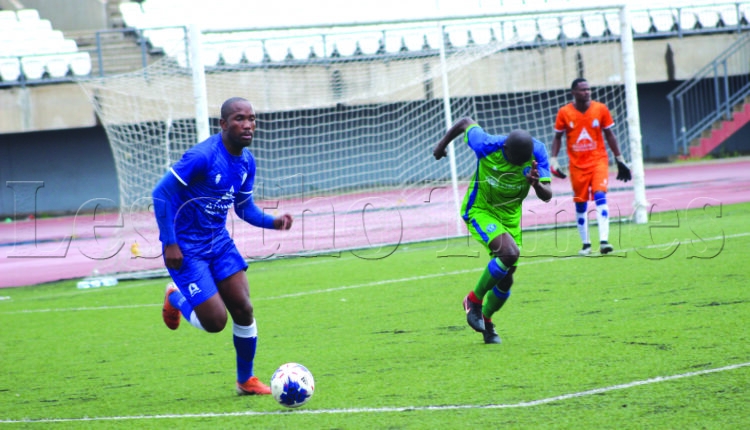 MATLAMA registered a 1-0 victory against LCS last weekend to cement their place at the top of Vodacom Premier League table.

The last weekend win saw Tse Putsoa extending their lead to four points from the second placed Bantu who are the defending champions.

Lisema Lebokollane was on target for the Sea-Point based outfit to help them extending the gap from one point to four as Matlama sit on top with 41 points while Bantu are on 37.

Bantu struggles continued as they went 1-0 down to LDF thanks to an early goal from striker Katleho Makateng who slotted home from the spot.

The loss meant that Bantu chances of defending their title are continued to be threatened as the team has been having internal problems that saw all their foreign players excluding Lazola Tjokojokwana not showing up since the team opened last month for the resumption of the league.

Bantu coach Bob Mafoso also has some contractual issues with the team and has not been with the team for the past two weeks while vice president technical Panyane Phiri resigned at the start of this month.

Victory for the army side saw them registering their second win since the resumption of the league as they beat Liphakoe with a same score margin a fortnight ago.

LDF are now fourth on the table with 30 points from 14 matches.

LMPS on the other hand had to come from one goal down to register a 2-1 win against their bitter rivals Sefotha-Fotha.

Sefotha-Fotha had found the lead from Tšepo Seturumane in the opening minutes of the match before Tanki Polokoane levelled the matter for Simunye while the second goal came in the second stanza from Roboama Koloti.

LMPS are on eight spot with 24 points from 15 matches while Sefotha-Fotha continue to flirt with relegation sitting at the bottom of the table with six points from 18 matches.

In the last match of the catch up matches played on Sunday, Swallows gave away their early lead to Lijabatho to lose the match 1-3.

Swallows remained on second from the bottom with 10 points from 17 matches while Lijabatho are sixth with 27 points from 18 matches.