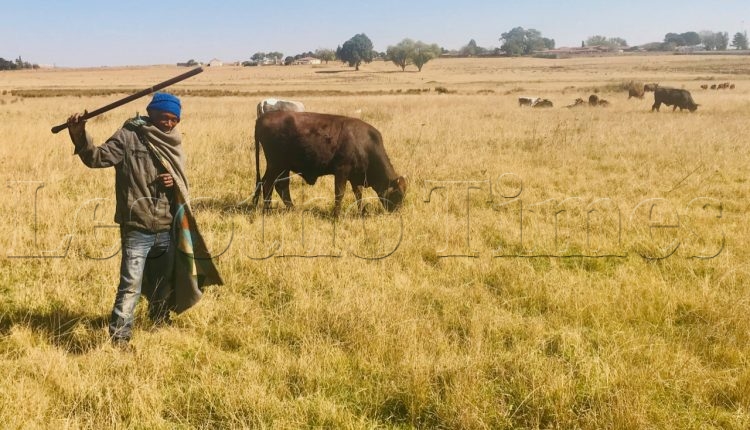 PRIME Minister Moeketsi Majoro has declared war on animal rustlers. He said the government has formed a task team of all the security agencies which is already recording successes in curbing stock theft in Mokhotlong.

Addressing the media at the Mejametalana airbase over the weekend, Dr Majoro said stock theft and other cross border crimes were rampant and could threaten relations with South Africa.

The event at the Mejametalana airbase was meant to welcome two Lesotho Defence Force (LDF) soldiers who were arrested last month in South Africa. The duo remains in detention despite frantic high-level diplomatic engagements to secure their release and return to Lesotho.

Private Rorisang Moepi (22) and Private Dumile Tsoanyane (26) were arrested in Matatiele, Eastern Cape on 19 July 2020. They were charged with illegally entering South Africa, stock theft, robbery and possession of unlicensed firearms and ammunition.

Just over a month later on 20 August, two South African soldiers and two immigration officers were arrested for sneaking into Lesotho without proper travel documents. The four are Corporals Zibuse Mbhense (48) and Muzikawulahlwa Shandu (46) and immigration officers, Mfundo Mazibuko (38) and Lipuo Lebese (39).

They were freed on bail on 25 August by Senior Resident Magistrate Peter Murenzi. The quartet’s arrest was widely viewed as an act of revenge for the earlier arrest of the Lesotho soldiers in South Africa.

It had been expected that after the freeing of the South African soldiers and immigration officers, albeit on bail, the neighbouring country would reciprocate by freeing the Lesotho soldiers.

And on Friday, Dr Majoro said Lesotho and South Africa were committed to fighting cross border crimes among them livestock theft.

“However, our government and that of South Africa are committed to fighting it with all the resources we can accumulate.

“I once said that the government would form a task team of all security agencies, (police, army, intelligence and correctional services officers). The task team is now operational and I am getting reports that it is already making arrests.

“The task team has arrested locals who had stolen 40 cattle from South Africa. Thirty-two cattle were recovered and returned to South Africa. Another eight are still missing.”

He said the task team has acquired information about animal rustlers and would soon intensify arrests.