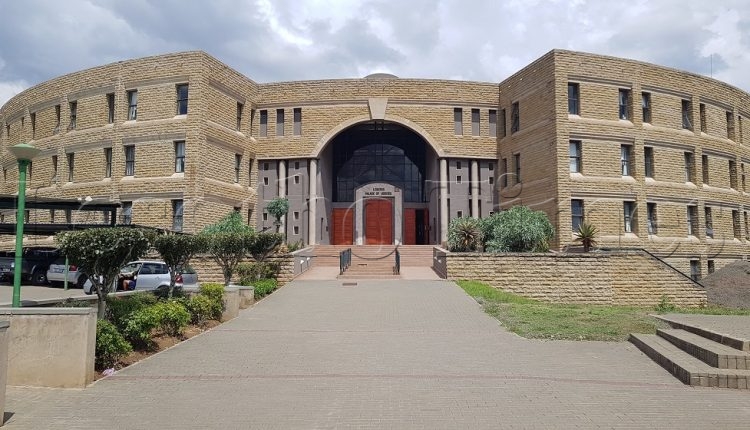 MAGISTRATES have appealed to the Judicial Service Commission (JSC) to appoint them to the High Court bench to fill up the posts left vacant by the deaths and retirement of some judges.

The appeal comes after they were recently overlooked in the purported appointments of five new judges by Acting Chief Justice ‘Maseforo Mahase and Attorney General Advocate Haae Phoofolo. The two met a fortnight ago and recommended five candidates for appointment as judges to King Letsie III.

The recommendation has torched a storm with Law and Justice Minister Professor Nqosa Mahao saying they were conducted in secret by the duo who did not even constitute the required quorum of JSC members. The JSC comprises of the chief justice, the attorney general, the chairperson of the Public Service Commission and a nominated judge.

Prof Mahao also argues that the appointment of substantive judges should be held in abeyance until after the implementation of the judicial reforms recommended by SADC to ensure the best candidates are chosen in an open and transparent process.

The magistrates, under the banner of the Judicial Officers Association of Lesotho (JOALE), have now weighed in on the saga, questioning why their members have been consistently overlooked for promotion as judges.

None of the five recommended by Justice Mahase and Adv Phoofolo are magistrates.

This despite that a significant number of magistrates have been dispensing justice in the lower courts for 10 years or more. Some like Chief Magistrate ‘Matankiso Nthunya have been magistrates for 25 years.

She has been overlooked nonetheless and only magistrate Polo Banyane was promoted to acting judge last year as the JSC sought to ease the shortage of judges which has been exacerbated by the deaths of Lebohang Molete and Lisebo Chaka-Makhooane on 30 May and 14 July 2020 respectively.

The 31 July 2020 retirement of Justices Semapo Peete and Teboho Moiloa further reduced the number of judges to just eight. But despite this, the JSC has overlooked experienced magistrates for promotion, a fact they lament in their 24 August 2020 letter to the JSC.

“As the executive committee of the Judicial Officers Association of Lesotho … we would like to propose on behalf of every magistrate, that the commission (JSC) should consider deserving magistrates for the appointment of the current and any subsequent vacant positions of the judges of the High Court,” JOALE secretary,  Masopha Kao,  states in the letter to the JSC.

“Indeed, in the past judges have been appointed from the lower bench (magistracy). However, it is our considered opinion that that was sparingly done. It is our view that there are still deserving magistrates ripe for such appointments.

“Every professional, across all professions globally, would like to progress in their field. As such, it is every magistrate’s dream to become a judge. The High Court and Magistrates’ Courts are part of a single judiciary in Lesotho. Thus, magistrates have a legitimate expectation that, as part of their progression within the judiciary, they would be given an opportunity to serve as His Majesty’s judges whenever such opportunities arise.

“In another respect, the appointment of magistrates to the higher bench motivates the rest of the magistracy. In this way, hard work and the hunger to learn is promoted amongst magistrates. This is a good recipe for perfection or excellence and professionalism. We thus, propose that above everyone else, magistrates be given the first priority in the upcoming appointments.”

Magistrate Kao also laments the fact that even within the magistracy, promotion is very limited as there are only a few senior positions, namely three chief magistrates and four senior resident magistrates.

Those who occupy such positions only retire upon reaching the age of 60 meaning that those below them remain stuck in the same positions without any prospect of advancement.

“This rampant stagnation of magistrates has the effect of demotivating our colleagues. In that state of mind, they cannot exhibit their best performance and abilities… One of the solutions to this problem is to promote deserving magistrates to the higher bench (judges).”

Magistrate Kao argues that magistrates are well-equipped to serve as judges because they are subjected to rigorous interviews to become magistrates in the first place. He says they acquire vast knowledge of the law due to their long service as magistrates dispensing justice in the lower courts.

“It is common knowledge that magistrates are subjected to strenuous interviews to establish how much they know the work they have applied for. The best candidates are selected for the positions. They then start walking a long journey as judicial officers, doing more or less the same work they would do had they been appointed as judges.

“In the process they acquire vast amounts of knowledge of law, procedure, interpretation and application of the law and how to conduct court proceedings.

“In addition, they get to know how to conduct themselves in a manner that a judicial officer, inclusive of a judge, would reasonably be expected to. This is the kind of experience that nobody throughout the entire legal profession possesses, but magistrates.

“Moreover, to date we are not aware of any magistrate who has ever been dismissed for incompetence in Lesotho. That is proof enough that our magistrates are competent and meet the standards of a judicial officer of any rank and status. As such, magistrates deserve to be appointed as judges of the High Court whenever vacancies surface and which is a pressing matter at the moment,” Magistrate Kao states.

Majoro, Zaly settle out of court