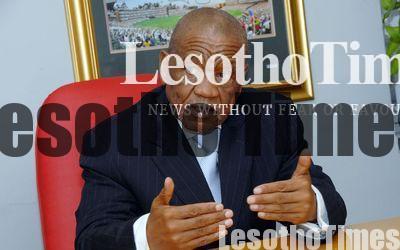 LESOTHO failed to secure the highly anticipated Southern African Development Community (SADC) Organ on Politics, Defence and Security Cooperation chairmanship on Sunday due to the country’s political instability and bad blood between the army and police.

According to Sports Minister Thesele ‘Maseribane, the on-going bickering between the leadership of the three ruling parties and power-struggle between the Lesotho Defence Force (LDF) and Lesotho Mounted Police (LMPS) had resulted in SADC members doubting the country’s capacity to lead such a crucial structure.

Speaking from Zimbabwe’s resort town of Victoria Falls on Monday this week on the final day of the 34th Summit of SADC Heads of State and Government, Chief ‘Maseribane said a preliminary meeting by a council of ministers had concluded that the political and security situation in Lesotho rendered the country “incapable of managing the Organ”.

It was after this meeting that South Africa’s President Jacob Zuma was elected to chair the Organ until the next SADC summit is held in Botswana in August 2015, with Lesotho Prime Minister Thomas Thabane deputising and Namibia’s President Hifikepunye Pohamba completing the Troika, he added.

“We have a lot of unresolved issues as a country and have to first resolve them before assuming the chairmanship of the Organ,” said Chief ‘Maseribane, whose Basotho National Party (BNP) formed a coalition government with Dr Thabane’s All Basotho Convention (ABC) and Deputy Prime Minister Mothetjoa Metsing’s Lesotho Congress for Democracy (LCD) in June 2012.

“We recommended, as a country, that because we had serious political, defence and security issues, that we be allowed time to clean our house.

“But the fact that Lesotho was elected deputy chairperson of the Organ, is an indication that SADC still has confidence in us.”

Chief ‘Maseribane said the country should first resolve the long-standing impasse between the LDF and LMPS, conclude investigations into the 27 January 2014 bomb attacks on the homes of Police Commissioner Khothatso Tšooana, Dr Thabane’s partner Liabiloe Ramoholi and her neighbour ‘Mamoletsane Moletsane, resolve issues concerning parliament which is currently under a nine-month prorogation and uproot corruption, before it could earn the trust of its neighbours.

“We cannot turn a blind eye to the fact that we have a problem with our security forces. The situation between the LDF and the LMPS is very serious and borders on insecurity,” Chief ‘Maseribane said.

“Again, the fact that the home of the commissioner of police and those of two innocent women were attacked by bombs is also a serious security breach.

“All these issues fall under politics, defence and security and we need to clean-up our own house before we can even think of managing the SADC Organ on Politics, Defence and Security.”

The BNP leader emphasised differences between the coalition leaders — which nearly ended Dr Thabane’s premiership two months ago after Mr Metsing publicly accused the ABC leader of making unilateral decisions on key issues despite being in a consultative government — needed to be dealt with decisively.

According to Chief ‘Maseribane, who is the coordinator of talks between the warring coalition government partners, there are issues of trust between him, the premier and Mr Metsing, which need to be ironed out for normalcy to return to the coalition.

Meanwhile, in his report as the outgoing chairperson of the SADC Organ on Politics, Defence and Security Cooperation, Mr Pohamba told the just-ended summit that when he learnt of the impasse between Lesotho’s security agencies, he had assigned a troika of ministers in May this year to look into the issue but later realised they could not deal with the situation “as it was above them”.

The mission was led by the chairperson of the Ministerial Committee of the SADC Organ on Politics, Defence and Security Cooperation, Netumbo Nandi-Ndaitwah also of Namibia.

Mr Pohamba said he later came to Lesotho to see if he could help resolve the situation “only to be met with news that parliament had been prorogued (on 13 June)”.

However, Mr Pohamba said he later engaged the concerned political leaders, who in turn, promised to resolve their issues, hence their 31 July visit to Namibia, where they signed a declaration that they would have ironed out their differences by 14 August.

On its part, the LCD had promised to cancel the agreement the party had signed with the main opposition Democratic Congress (DC) on 11 June with a view to forming a coalition government and dumping the ABC/BNP alliance, while Dr Thabane had committed to facilitating the lifting of parliament’s prorogation.

However, by the 14 August deadline, only the LCD had honoured its pledge while parliament remains suspended, with Dr Thabane yet to publicly announce the way forward regarding the prorogation.

These developments, it appeared, persuaded the other SADC countries that all was not well in Lesotho hence the decision to take away the Organ’s leadership from the country and award it to South Africa.

In his report, Mr Pohamba also referred to a letter written by the DC, in which the party appealed to the SADC not to award the Organ’s chairmanship as doing so would be “absurd”.

In the letter dated 21 July 2014 and addressed to the SADC Executive Secretary, Stergomena Lawernce Tax, the DC noted passing the baton to Dr Thabane would “not only be inelegant and absurd in the extreme, but also flew in the face of all logic and expectation”.

“Such a move, Your Excellency, is imprudent. It can only be a bad omen for the future probity of SADC as a custodian of democracy in the sub-continent,” the DC wrote.

“It is on the basis of the submissions made above that we sincerely advice and earnestly appeal to SADC to do the right thing in these circumstances and move the chairmanship of the Organ to the next member state, in order to safeguard the honour and integrity that SADC has achieved over the years.”

The DC added Lesotho’s political situation, where the prime minister had prorogued parliament for nine months until 27 February 2015, “as a way of circumventing a parliamentary motion of no-confidence in his leadership, is easily, both in substance and effect, the highest violation of democracy, short of a coup d’état”.

SADC snub must be a lesson to Lesotho: analysts