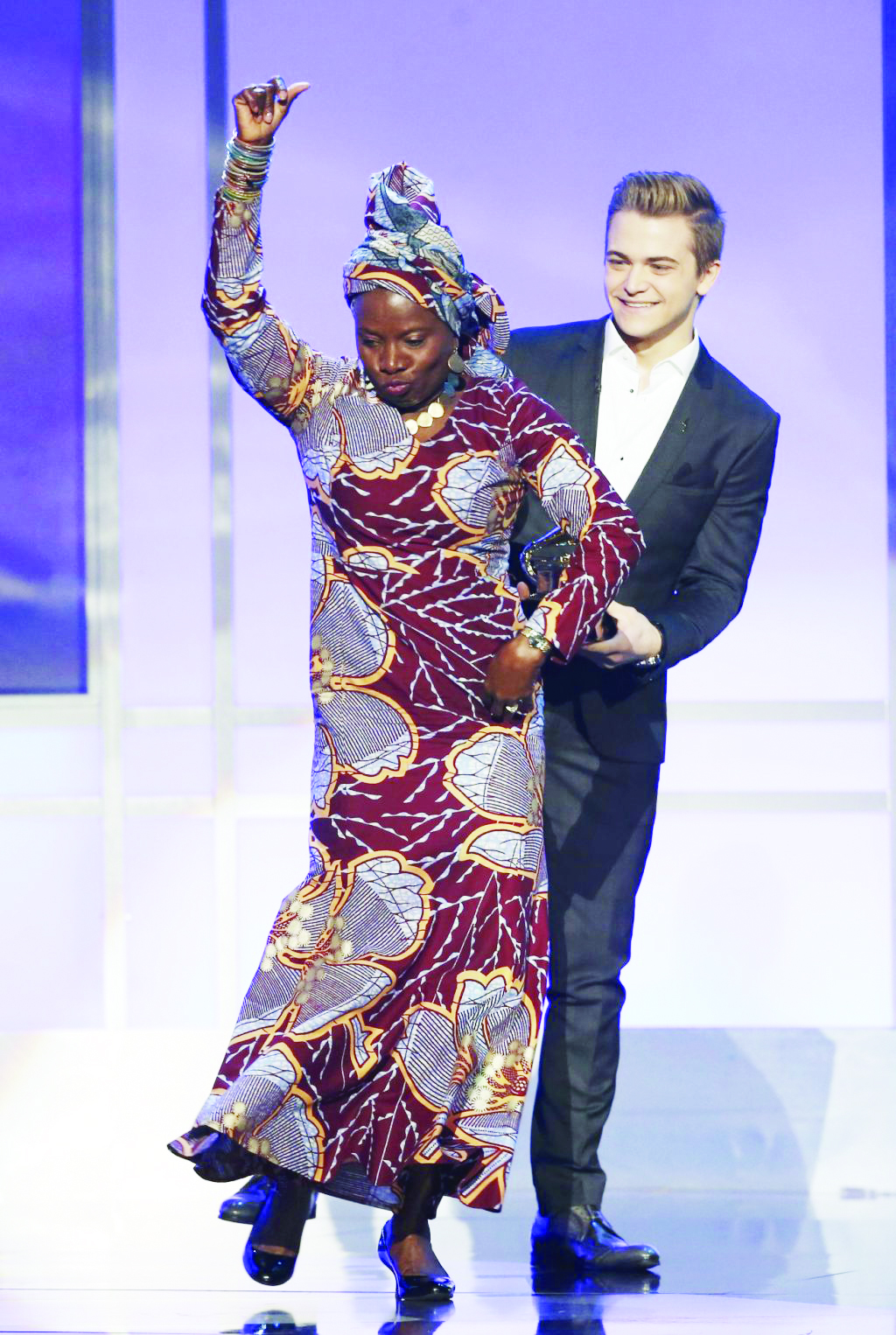 LOS ANGELES – Angelique Kidjo, one of the biggest African musicians on the world stage, on Sunday won her second Grammy for World Music for Eve, a musical tribute to the continent’s women.

“This album is dedicated to the women of Africa — to their beauty and resilience,” the Beninese singer said. “Women of Africa — you rock!“ “For me, music is a weapon of peace, and today more than ever, as artists we have a role to play in the stability of this world,” Kidjo said as she accepted the award at a ceremony in Los Angeles.

Kidjo, who is based primarily in New York, returned to Benin and elsewhere in Africa for Eve. She taped the cadences and harmonies of women’s choirs, in the end recording more than 100 women including her own mother.

The album also featured a diverse array of musical collaborators including the Kronos string quartet, the Luxembourg Philharmonic Orchestra and keyboardist Rostam Batmanglij of the indie rock band Vampire Weekend.

Speaking to reporters afterward, Kidjo said she was first inspired to create “Eve” on a trip to Kenya when she listened to other women and recorded their voices on her smart-phone.

“I wanted the world to see African women not only through the lens of rape and misery, but also from the musical point — their beauty, their resilience,” she said.

Kidjo said that the African women she worked with told her, “’Next time you come, bring some American women and we can play together.’”

Kidjo previously won a Grammy for her 2007 album Djin Djin, which also tapped a range of guest artists including guitar legend Carlos Santana and singer Alicia Keys. She is collaborating on an upcoming work with composer Philip Glass.

The 54-year-old singer is known for her activism. She has pressed for a more sustained effort to improve public health in West Africa in the wake of the Ebola crisis.

Kidjo won out in a category that included the sitarist Anoushka Shankar and the Brazilian bossa nova legend Sergio Mendes.

The award to Kidjo was handed out in an afternoon ceremony in Los Angeles before the main Grammys event that featured pop categories and performances by artists including Madonna, Paul McCartney, Rihanna and Kanye West.

The first ceremony kicked off with the New Age Album category which was won by Winds of Samsara, a collaboration between the South African flautist Wouter Kellerman and Indian keyboardist Ricky Kej.

The album tried to show the links between the non-violent philosophies of Mahatma Gandhi and Nelson Mandela. It brought in more than 120 musicians from around the world, building off Indian classical music.

“I’ve listened to a lot of Indian music and, even though I’m not 100 percent steeped in all the ragas, I do feel it in my heart and I brought my own interpretation,” Kellerman told reporters.

In another award with a South Asian connection, the prize for Best Children’s Album went to the audio version of I Am Malala — the memoir of Malala Yousafzai, the Pakistani girl who was shot for her advocacy for education and last year won the Nobel Peace Prize.

The Grammy went to the Indian American author Neela Vaswani, who said she never met Malala but was chosen in part because of her ability to perform in a South Asian accent.

Vaswani said she learned of the Grammy nomination while reading about pop star Pharrell Williams, who was nominated in six categories.

“I’m actually a writer and a professor, so this is pretty strange and crazy for me,” she said.

The award for Reggae Album went to Fly Rasta by Ziggy Marley, the son of Jamaican legend Bob Marley. Ziggy Marley, a frequent Grammy winner, did not appear to accept the latest award.

But viewership this year dropped by more than 3 million viewers from 2014, when a tribute to The Beatles and a mass wedding attracted 28.5 million viewers and the show’s second-largest audience since 1993.

The most tweeted moment during Sunday’s Grammy show in Los Angeles came when rapper Kanye West rushed the stage as rocker Beck went up to accept the coveted album of the year award for Morning Phase.

Although the outspoken West did not grab the microphone like he did during his infamous 2009 MTV Video Music Awards incident, when he interrupted Taylor Swift’s acceptance speech in support of Beyoncé, he told network E! following the Grammy show that Beyoncé should have won album of the year. – AFP

Girl denied education due to disability