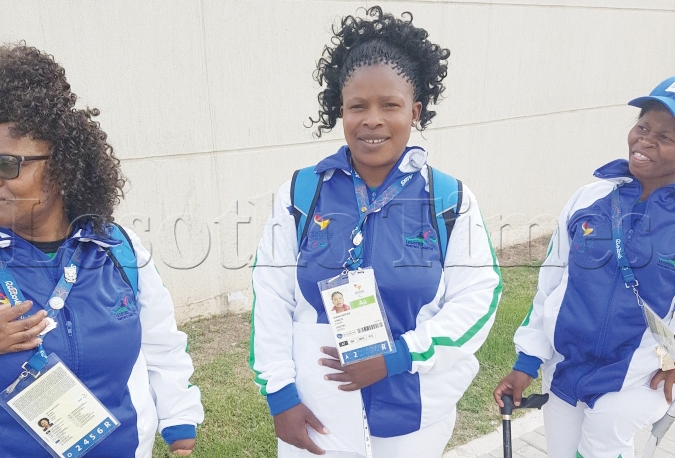 PARALYMPIAN discus thrower, Litšitso Khotlele, is happy with her performance in the ongoing Tokyo Paralympics, despite finishing second from the bottom.

Despite finishing ninth, she set a new personal record by breaking her other record of 20.34 metres which she set during Olympic qualifiers in April this year.

She qualified during the South Africa Sports Association for the Physically Disabled (SASAPD) National Championships in Port Elizabeth.

Her Sunday performance was also an improvement of last year’s performance where she came 10th after throwing 19.1 metres.

Khotlele told the Lesotho Times this week that although she had expected a better performance in terms of her positioning, she was happy that she had improved her distance.

“Although I wanted more, I am happy with my performance considering that my throws have improved,” Khotlele said.

“Breaking my personal best is a sign that I had prepared for the games and that is a huge achievement.

“In sport, we say winning a medal is a bonus. What is more important improving.”

That she is the only local Paralympian to reach the grand stage since 2016 makes her proud.

“I am proud of myself. If I keep on battling against the best athletes from overseas as the only athlete from African countries in my category, that makes me feel special and urges me to continue working hard.”

Team Lesotho was dealt a body blow when coach, Thabiso Ratšoane, and team manager, Lefa Moneri, tested positive for Covid-19 upon their arrival in Tokyo. They were therefore, isolated.

Although Khotlele tested negative, she had been in contact with the duo and therefore, missed her second chance of becoming Lesotho’s flag-bearer during the official opening ceremony having done so in 2016. A volunteer had to be appointed to become a flag bearer.

The experience also took a toll on her as she had to train under close monitoring and without her coach. To her relief, she was guaranteed that she would compete. Her coach was only available on the day of the competition.

“When members of the team tested positive for Covid-19, it had a huge psychological effect. A few days before a competition, that is when one needs a coach the most.

“This forced me to end up training with the team doctor and was only speaking to the coach on the phone. It was difficult and I was worried.”

Khotlele pleaded with other disabled persons to consider joining sports and prove to themselves that disability is not inability.

The games’ closing ceremony will be on Sunday and Khotlele will this time around be Lesotho’s flag bearer.

More must be done to improve women’s soccer