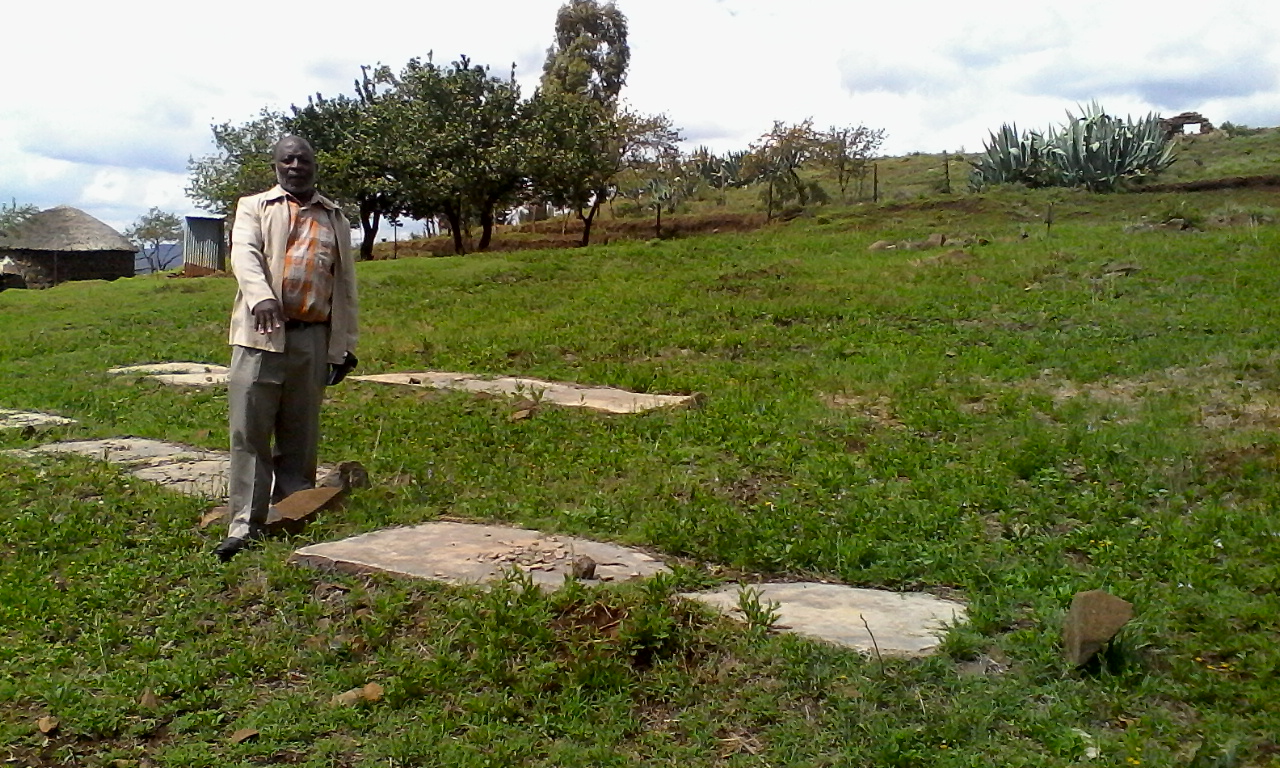 MAFETENG – Sitting helplessly next to her bedridden mother five years ago, 14-year-old Palesa Shale (name changed to protect her identity) would cry and pray for her only surviving parent’s miraculous recovery.

Palesa is now 18 years of age but clearly remembers those “very difficult” days which changed her life forever.

Her mother has since recovered and is now living with HIV, but the teenager remains scarred by that frightening experience which nearly robbed her of her last parent after losing her father when she was still a toddler.

“I can clearly remember when and how it all started as if it was yesterday. My mother fell ill towards the end of 2012 and in no time, she was bedridden; she could not move. I was at Kena Primary School doing Standard Seven at the time, and would miss lessons if my mother happened to be worse that day,” says Palesa.

Despite the illness, Palesa’s mother would not allow any of her five children to touch her wounds. Palesa was the eldest of the siblings.

“I couldn’t understand why she did not want me to touch the wounds when cleaning her although she was clearly not feeling well. I believe she already suspected or knew that she was HIV-positive, and feared I might be infected if I came into contact with her open wounds,” Palesa told the Lesotho Times this week.

“I didn’t know what was wrong with my mother at the time, but I kept praying and hoping she was going to be OK one day, and take care of us.”

Palesa says life was getting more difficult by the day for her family as they would go “for days”, without food because their breadwinner was now bedridden.

“Life became unbearable because there was no one to fend for us and we kept hoping things would change for the better,” she said.

Due to frequent absence from school because of her mother’s illness, Palesa’s studies suffered and the once bright pupil did not pass with flying colours in her Primary School Leaving Certificate examinations.

And due to lack of funds, the teenager could not proceed to Form A and decided to repeat Standard Seven at Kena instead of staying at home.

‘The reason why I had to repeat was not because I had failed, but it was due to lack of school fees. I decided to go back to Standard Seven just to while up the time while hoping a Good Samaritan would come along and pay my tuition fees.”

That Good Samaritan was to come in the form of the Red Cross and in February 2013, Palesa enrolled for Form A at St Rodrigue High School.

“Around February 2013, ‘M’e Ntho Mokone from Red Cross Society visited Kena Primary School after she had learnt of my plight. She informed me that Red Cross had made arrangements for me to attend St Rodrigue High School and I was supposed to start the following week,” she said.

“I was over the moon as I realised that my life was about to change. There was now hope.”

By this time, Palesa’s mother had tested positive for HIV and put on antiretroviral drugs.

“She now knew her HIV status and her health was improving because she was taking ARVs. But this came with another challenge—that of stigma from my friends who were now refusing to play with me saying because my mother was HIV-positive, I must also be infected with the virus.”

This constant rejection forced Palesa and her siblings to visit Kena Clinic for HIV tests, hoping to put the stigma to rest.

The five youngsters tested negative for the virus.

“I made sure my friends knew about our results and the rejection stopped,” Palesa says.

After getting as much information as she could about HIV, Palesa says she decided to be extremely careful about own sex life.

“My mother’s status didn’t force me to make this decision; it only opened my eyes to a whole new world. While I knew through the Red Cross’ Kids Club that the virus isn’t transmitted through sexual activity only, I also learnt that being a teenager doesn’t mean engaging in sexual intercourse hence I decided to wait for the right moment,” Palesa said.

“I strongly believe sex has to wait; sex will still be there when I complete my studies. I don’t want to have a child before marriage or contract HIV and jeopardize my dreams of becoming a dentist.”

Meanwhile, Palesa is one of 2400 children affected by HIV the Lesotho Red Cross Society helped with school fees, groceries and lifeskills between 2005 and 2016. The initiative was being funded by the British Red Cross Society, and was officially closed this week in Kena, where Palesa took time to express her gratitude for the initiative.

Addressing the closing ceremony on behalf of Kena Red Cross Society Caregivers, ‘Mamarake Marake said it had been a difficult journey for the volunteers.

Among the challenges the caregivers faced, according to Ms Marake, was discussing condom-use with the villagers.

“At first, it was difficult to openly talk about using condoms to the community as the subject was considered taboo.  But with time, we gathered enough courage and people started warming up to issues around HIV and AIDS and some of those who were bedridden slowly recovered due to Red Cross’ intervention. It took years and patience to get to where we are today,” Ms Marake said.

Ms Marake added even though the project had come to an end, the community could still count on help from the caregivers.

Thabang Potiane is living with HIV and has urged the Kena community to support each other and ensure they take their medication even though the Red Cross Society project had run its course.

“People who were trained through this project are remaining behind and will continue to help us in this battle against HIV and AIDS, but I must thank Red Cross for helping us through the difficult times we have been facing and continue to grapple with,” Mr Potiane said.

He further said at the time the project started, it was difficult for caregivers because of the way the subject of HIV and Aids was being introduced to the community.

“This is the main reason why more and more people have died in silence as they were afraid of being stigmatised,” he said.

Mr Potiane also pleaded with people living with HIV and Aids to religiously take their medication to live longer.

“When we first came here, we realised that one of the reasons people were dying from HIV-related diseases, was stigma, as well as lack of medication and information. The stigma was further fueled by an arrangement that Tuesdays and Thursdays were reserved for HIV and Aids patients at the local clinic and more people died because of this,” Ms Mokoena said, adding the arrangement was later reversed.

“The disease had left so many children without parents and we currently have 2400 HIV and Aids orphans on our list. It is very rare that you find a child with both parents in this area. The infection is higher because of migration as most men from this area work in the South African mines.”

However, despite all the past challenges, Ms Mokoena believes Kena was ready to move on without Red Cross leading them by the hand.

“It is not going to be easy but we have confidence in the community here that they will not regress. They now know that sharing among themselves is very important. For instance, each year, during African Child Day, every family contributes food towards the celebrations and every summer, farming families give child-headed families fresh maize and vegetables free of charge,” she said.

“Community members have also vowed to ensure the Kids club runs smoothly as it nurtures and gives orphans and vulnerable children a sense of belonging.”

Kena Chief, Mathealira Shoaepane, believes his village has made “a lot of progress” in curbing the spread of HIV and TB through the help of Red Cross Society.

“Ninety percent of children living in this village are orphans and this situation breaks my heart because I know most of their fathers; they were my age-mates,” Chief Shoaepane said.

Asked what he was doing to ensure affected members of his community continued to lead positive lives after Red Cross’ departure, Chief Shoaepane said he had already made arrangements to donate land to the caregivers for farming purposes.

“Red Cross gave these children a better life and this must not come to an end now that they are leaving. It is our responsibility to raise these children and ensure they have enough food every single day. That’s why they are going to get this land on which they would grow food for the affected children,” the chief said.

On her part, Lesotho Red Cross Society Programmes Director ‘Matšepo Moletsane, said the organisation decided to work in Kena after King Letsie III declared HIV a state of emergency in 2010.

However, Ms Moletsane said it had not been easy to penetrate the Kena community.

“Talking about HIV and Aids was such a taboo that ’M’e Ntho was accused of destroying this village and  encouraging prostitution when she taught people about condom usage. She was reported to Morija Police Station for her work, but she soldiered on,” Ms Moletsane said.

“Kena was ravaged by HIV and Aids. People were dying and in almost every household the adults were infected and it would take caregivers the whole day to nurse the patients.”

Ms Moletsane further said the Red Cross project was initially meant to end in 2010, but had to be extended to this year. She also lamented failure by some patients to religiously take their medication because of lack of food.

“The valuation showed that more patients regressed after abandoning their medication because of lack of food as the medicine is taken after meals.

“We then introduced a food security component which meant people were going to be in charge of their own food production and the situation improved.

“The project trained caregivers on conservation farming and they, in turn, imparted their skills to the patients and their families,” Ms Moletsane said.

“At the end of this month, we will be packing our bags. Today we are saying the project trained people who are going to continue helping the community after we are gone.”

Ms Moletsane also said Red Cross was still going to monitor the Kena project to ensure nurseries and the clinic do not become white elephants.

In her remarks at the closing ceremony, Kena Clinic manager, ‘Mapaseka Mokoatsi thanked Red Cross for ensuring patients and their families were food-secure and encouraged to adhere to their medication.

“Even though it was difficult at times, there are multiple milestones recorded by this project and we are glad that we managed to save lives at the time Kena was ravaged by HIV, Aids and TB,” Mokoatsi said.

“This medication can only be taken after a meal and it was worrying that our patients did not have enough food. However, Red Cross caregivers worked very hard to ensure patients and their families were food-secure.”

On his part, Lesotho Red Cross Society President, Kopano Macheli, said he was happy with the way the project had run.

“From the time we started working here until now, we have 150 healthy children born by HIV-positive mothers and that is a huge success for us. We have substantially contributed towards an HIV-free future generation, so there is hope for this community.”

Mr Macheli however stressed that Lesotho Red Cross was strongly against projects that spoon-feed communities instead of empowering them.