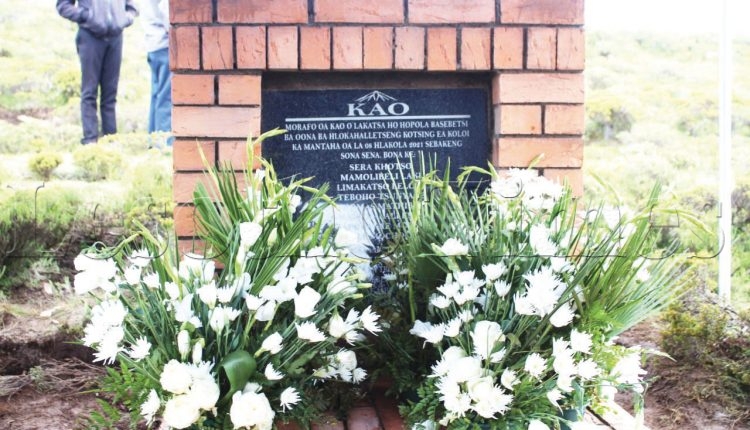 STORM Mountain Diamonds (SMD) has released the names of the eight Kao Mine workers who were killed in an accident in Butha-Buthe last Monday.

Seven passengers died on the spot while another one was announced dead on arrival at Queen Mamohato Memorial Hospital (QMMH), in Maseru.

According to Kao Mine chief executive officer Mohale Ralikariki, all the injured passengers were taken to a clinic nearby Letšeng Mine. One was airlifted to QMMH later that day due to the severity of the injuries while another two were transferred to the same institution the following day.

SMD this week held a memorial service for the eight deceased workers at Tlaeeng Pass, in Butha-Buthe.

The memorial service was attended by fellow mine workers and the bereaved families. It was followed by the unveiling of a monument at the accident scene.

Addressing mourners at the service, Kao Mine chief executive officer Mohale Ralikariki, said the bus left the mining site at midday on 8 February headed for Maseru. It had 35 passengers who were returning home after finishing their shift at the mine.

“There were 35 passengers on the bus. The bus left the gravel road onto the A1 highway without incident,” Mr Ralikariki said.

“However, a few kilometers from the intersection towards Butha-Buthe, the driver of the bus lost control and it overturned.”

Apart from those who were transported to Maseru, another three were transferred to South Africa.

He said all the surviving passengers have been treated for post-trauma.

“SMD would like to thank the various authorities and institutions and the Mining minister (Serialong Qoo) for his considerable assistance.”

For his part, Mr Qoo also sent condolence messages to the bereaved families.

“What happened is very sad and I would like to send my deepest condolences to the families who lost their loved ones and also wish a speedy recovery to those who are still in hospital,” Mr Qoo said.

He expressed his gratitude to the SMD management for the support that it has rendered to the mourning families.

“I expect that this is the kind of support you will show to all your staff at all times,” Mr Qoo said.