Indigenous brick manufacturers on the brink 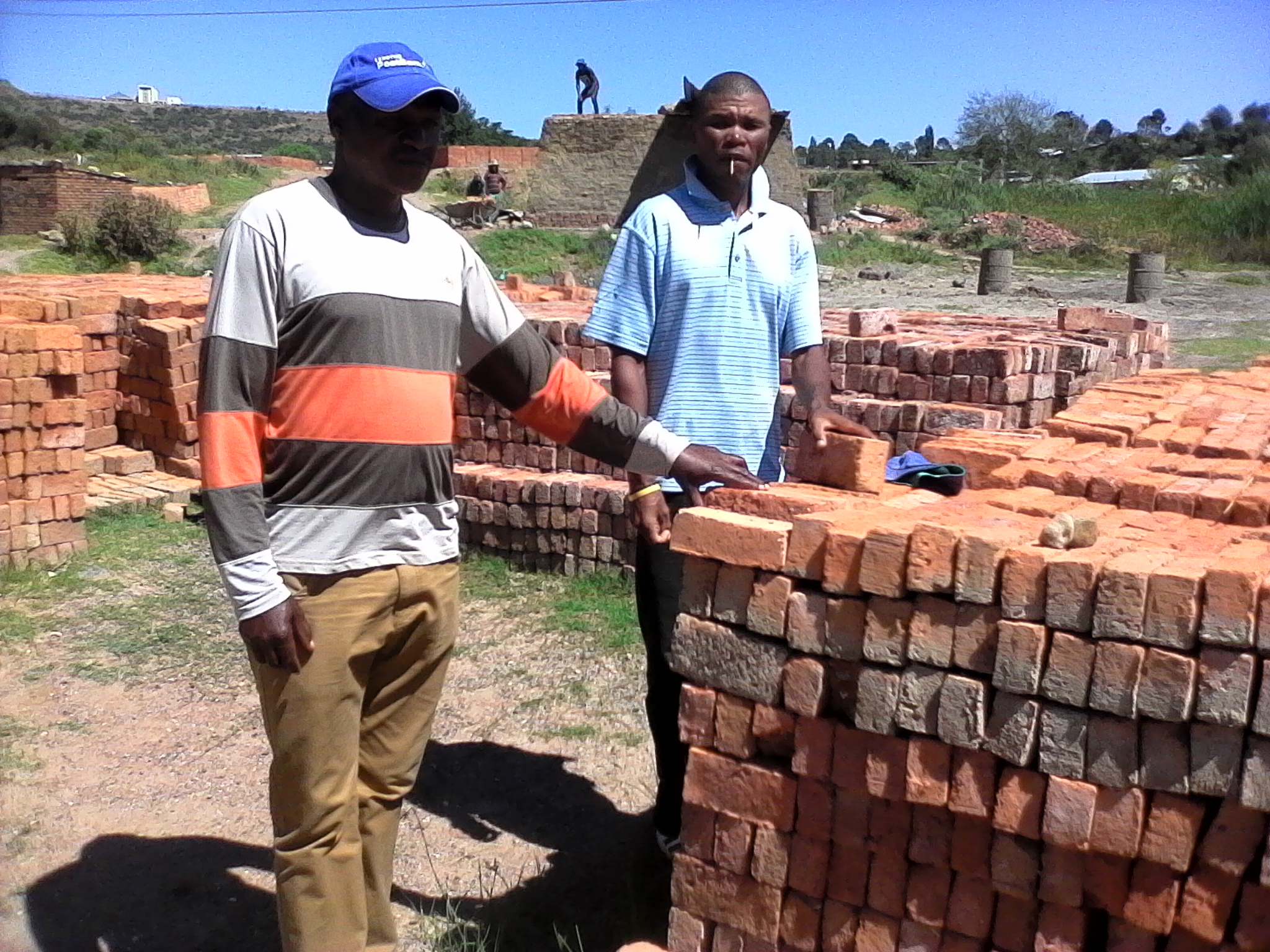 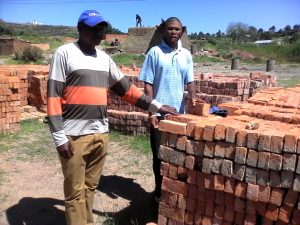 …as contractors give them a wide berth in favour of ‘foreigners’

Shakhane Makoanyane gazes into the distance, and his vacant stare betrays an inner turmoil sparked by the proverbial fear of the unknown.

The 50-year-old appears lost in thought, but quickly regains his composure before looking at the mounds of bricks a stone’s throw away—and which are the reason for his anxiety.

“To say the future in this brickmaking business is bleak, would be the understatement of the year,” deadpanned Mr Makoanyane, as he surveyed his brick-filled yard in Mohalalitoe on Monday this week.

Once a thriving business in which clients literally fought over supplies, Makoanyane said indigenous, small-scale brick-manufacturers can now hardly break even due to lack of markets.

“Until two, three years ago, brick-manufacturing was a very profitable business, and you would hardly find anyone with stock that had not been paid for in advance,” Mr Makoanyane told the Lesotho Times.

“But the industry is on its knees as we speak, with many of the businesses closing down because no-one is buying the bricks. Those of us who remain open are only doing so because we have nowhere else to turn. Unless a miracle happens, and the attitude of construction company owners and government officials changes, and they give us the same chance they afford Chinese-owned brick-makers who are now driving us out of business, then we are doomed.”

This particular industrial area of Mohalalitoe used to be a hive of activity a couple of years ago, with both men and women dashing back and forth with mud-laden brick-making machines as they battled to meet their daily targets.

However, when the Lesotho Times crew visited the area on Monday, there was hardly any movement, confirming Mr Makoanyane’s statement that this was but an industry on its deathbed, and in need of a miracle to survive.

“In the old days, you would find workers busy mixing clay and ashes to produce the bricks, while others would be removing the bricks from the oven.

“You need to have seen what it used to be like on a Monday like this to appreciate what I am trying to say, because the place would be buzzing with activity.

“But look at it now; it’s virtually dead. Competition from the Chinese who are offering a slightly different type of brick and also the shortage of clay, have conspired to put us out of business,” lamented Mr Makoanyane.

According to Mr Makoanyane, in addition to being shunned by construction companies and government, Basotho brick-makers have the disadvantage of not being able to deliver the product to customers, which their foreign counterparts do.

“I have about 100 000 bricks here, which have no takers. My neighbour has stock that has been in his yard since January last year, which is about 14 months now. Yet back in the day, we would have pre-orders, and at times, even fail to meet demand. It is a different story now, and for the first time since I entered into this business in 1998 after being retrenched from the mines in South Africa, I am now panicking because this is where I earn my living, and I find myself with nothing to do, and being shunned by customers,” said Mr Makoanyane.

“When I left the mines, I wanted to set-up a business so that my children would not suffer. I come from Sekamaneng and when I couldn’t get a job, I decided to come here and when I saw the workers in full production, I fell in love with the business. The smell of the burning bricks, and the workers’ commitment, simply had me hooked from word go.

“I then joined a certain old man who was operating on this site, and became his partner. I bought new machinery since he had been in business for a while and his equipment was a bit worn-out.

“I had to learn from him and our employees about this business, and in those days, we did not need to hire any transport as there were people always parking their trucks here and ready to deliver the bricks for the customers.

“We would bake over 30 000 bricks per week, and like I said, the market was there, and the bricks would be gone in no time, but the situation has changed.

“And unless there is a dramatic change, I don’t see us, indigenous brick-manufactures, surviving.

“If you continue holding stock for too long, and it’s in the open where it is subjected to adverse weather conditions, it loses its quality and no-one wants to buy it.

“When I started here, we used to sell the bricks for M100 or M200 per thousand based on the grade, but the price has increased to between M1000 and M1200 per thousand, due to the changing times. Like I said, I have over 100 000 of the bricks here, which means if I don’t get a buyer soon, I am in deep trouble.

“Some of my former associates have since closed shop because of the reasons I have just mentioned and I am just hanging on, hoping that the tide will turn one day, but for how long I will cling-on, I don’t know.”

Another brick-producer, Lethola Thamae, said he opened his business 15 years ago, but was now contemplating closing it down due to lack of markets.

“Government and construction companies used to be our main customers but this is no longer the case; they now shun us.

“The problem started when we had to stop getting clay from this area due to council regulations as well as competition from the Chinese. Having to bring clay from another part of the city increased our overheads, while our former customers, for some reason, now preferred to do business with the Chinese, although the quality of our bricks is virtually the same.

“We now come here mostly to sit because we have nothing to do. As for our employees, we have since told them to find jobs elsewhere because we can’t continue keeping them here when we are not being very productive,” he said.

According to Mr Thamae, government and local construction firms should not betray Basotho by giving business to foreigners.

“Instead of looking out for their own people, government officials and local companies are doing business with the Chinese, and leaving us to suffer. Hopefully, things will change now that there is a new administration coming to power. I also urge local companies to give us a chance because our bricks are also of high quality.”

Mokhitli Mokonofane, who opened his brick-moulding business in the area in 2003, also appealed for government intervention to save Basotho enterprises.

“I came here in 1994 and joined one of the first brickmaking companies that had been opened here that year. But in 2003, I decided to start my own business, and unfortunately, the situation was starting to deteriorate.

“I didn’t need to be highly educated to be in this business, hence its attraction for anyone who was hardworking and willing to go the extra-mile to meet customer-demands.

“It’s sad that the industry is facing collapse because it means many people are going to find themselves jobless.

“I appeal to government to do something about it and make sure there is legislation that protects industries such as ours against foreign competition,” said Mr Mokonofane.

Contacted to shed light on why construction firms were no longer keen on bricks manufactured by local businesses, a contractor who requested anonymity said: “We would want to support our countrymen, but the problem is the quality of the bricks, compared to those manufactured by the Chinese.

“The Chinese use state-of-the-art machinery and electric ovens whereas Basotho use manual compressors and burn their bricks with coal. This presents a problem because the temperature is not as high, hence the strength is also different. In short, it is a matter of quality; there is nothing personal about it.”

Media under siege from misguided politicians

“Disability took me out of the classroom, buried my dreams”