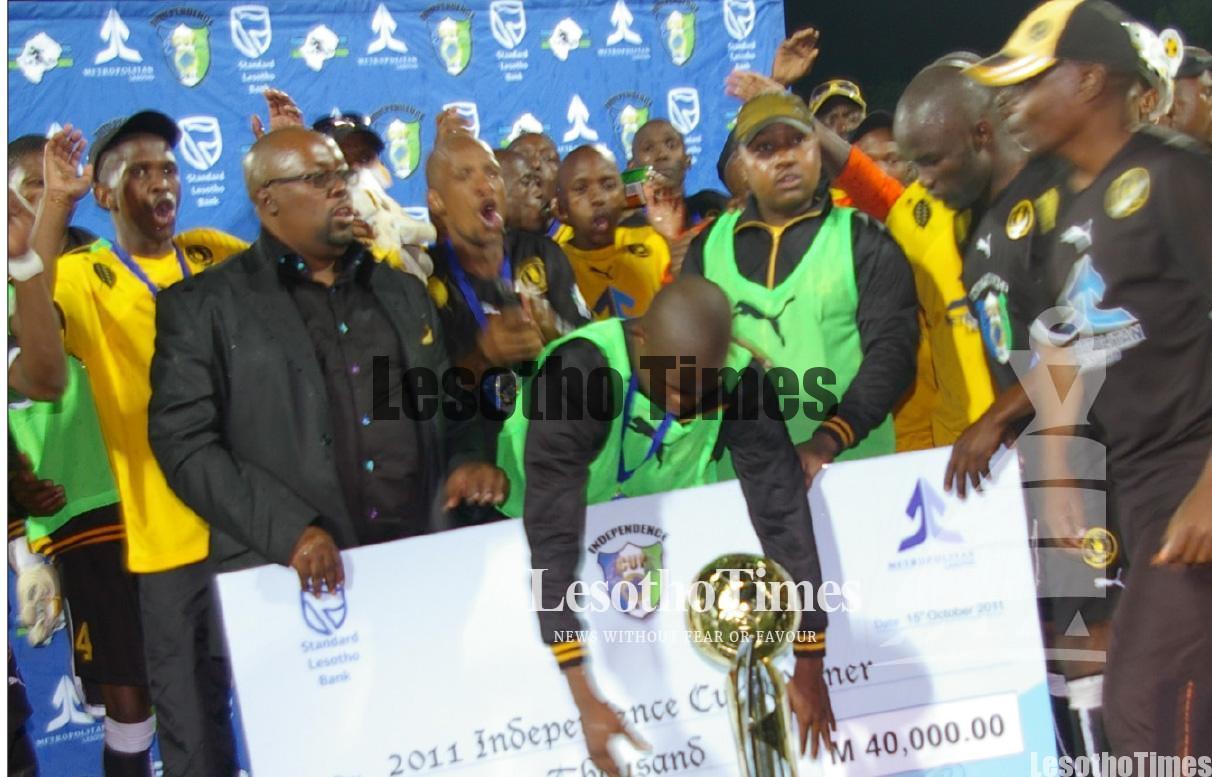 ALL roads lead to Setsoto Stadium for the Independence Cup as the country’s top league teams battle it out for M200 000 first prize.

The competition gets underway on Saturday with Lioli taking on Matlama in the first semi-final while defending champions Bantu take on LDF in the second match.

However, the insurance company has already announced that they are withdrawing from the competition while Standard Lesotho Bank said they would meet with the Premier League Management Committee at a later stage to map the way forward.

Bantu coach, James Madidilane said that he has his eyes set on making it a double of the Independence Cup but said he is aware that they must first find a way of getting the better of LDF in the semi-finals.

“I think our preparations have gone very well but we know very well that cup competitions are different to league matches and we will have to change our mind-set,” Madidilane said.

“We are playing a team that we also know to be very physical which is another challenge but we will go there and fight to be champions.”

The A Matšo Matebele coach said he is preparing for two games because they want nothing less that the honours.

“I can tell you that we are preparing our team for two matches which will be the semi-final and the final but for now the focus is on the first match.

“It will be good for the team to defend the title because that is our ambition but it will require a lot of hard work and our players need to rise to the occasion.

“I think we are in a good space now. I will say the players are responding well now and I think we are at the level that we were last season but there is still room for improvement,” he said.

However, LDF striker Mojela Letsie told this publication that winning the Independence Cup can go a long way in bringing the glory days back at the army side.

“This is the first trophy of the season and if we fail to win it then we will have a difficult season while winning it can help us have a successful campaign.

“We will go out with everything that we have to win this trophy and it would be good to start to win a trophy early in the season.

“It’s going to be an exciting competition with the other three teams and I’m confident that we will rise to the occasion.

“We are going there as a team to compete and fight for the trophy,” Mojela said.

The lanky striker, who netted the equaliser in last weekend’s 1-1 draw with Lioli is however, doubtful for the match with Bantu due to injury.

In the second match, Matlama and Lioli renew their rivalry and Tse Nala skipper, Mafa Moremoholo, said his side is desperate for silverware after a dry 2017/18 season.

“It’s very important for the team that has recently been reshuffled to make the new players understand the winning culture at the club.

“They are aware that Lioli is a big team that is used to winning trophies and needs positive results at all the time. As a team we are making progress though there are still a few things that need to be fixed.

“I think we have made good progress so far and we are not far from the other teams. I strongly believe that we have what it takes to compete and win the trophy.

“We have already grinded big results against big teams in the league and that shows that we have the ability to win the Independence Cup this weekend,” Moremoholo said.

Matlama have been the team to beat so far and are at the summit of the Econet Premier League with 14 points from six games.

They head into the two-day tournament on the back of a 4-0 rout of Swallows and coach Thabile Secker told this publication that he has a lot of work to prepare his team mentally to maintain their impressive run.

“We have had a good start to the new season but there is still a long way to go and we need to maintain consistency.

“We have to be strong mentally to face whatever comes our way and we need to ready the players. We need to switch our minds to the cup competition because it is completely different to playing in the league. Matlama is a big team but that can only be proven when we win trophies,” Secker said.

Secker said their form in the league brings more pressure from expectations for his team to continue grinding positive results.

“There is a lot of pressure for us from the supporters after a promising start to the new season to continue producing good results so it is not easy but I’m confident that we will be ready to do our supporters proud.

“The mood is very high in our camp and the players are highly motivated to compete for the trophy.”

There will also be individual awards with the Player of the Tournament set to pocket M8000 while the Man of the Match in each game will walk home with M3000.

Man of the match

Goalkeeper of the Tournament
M6 000

Player of the tournament
M8 000

Lehata could return to Mauritius camp