‘I’m so proud Lesotho now has a medical school’ 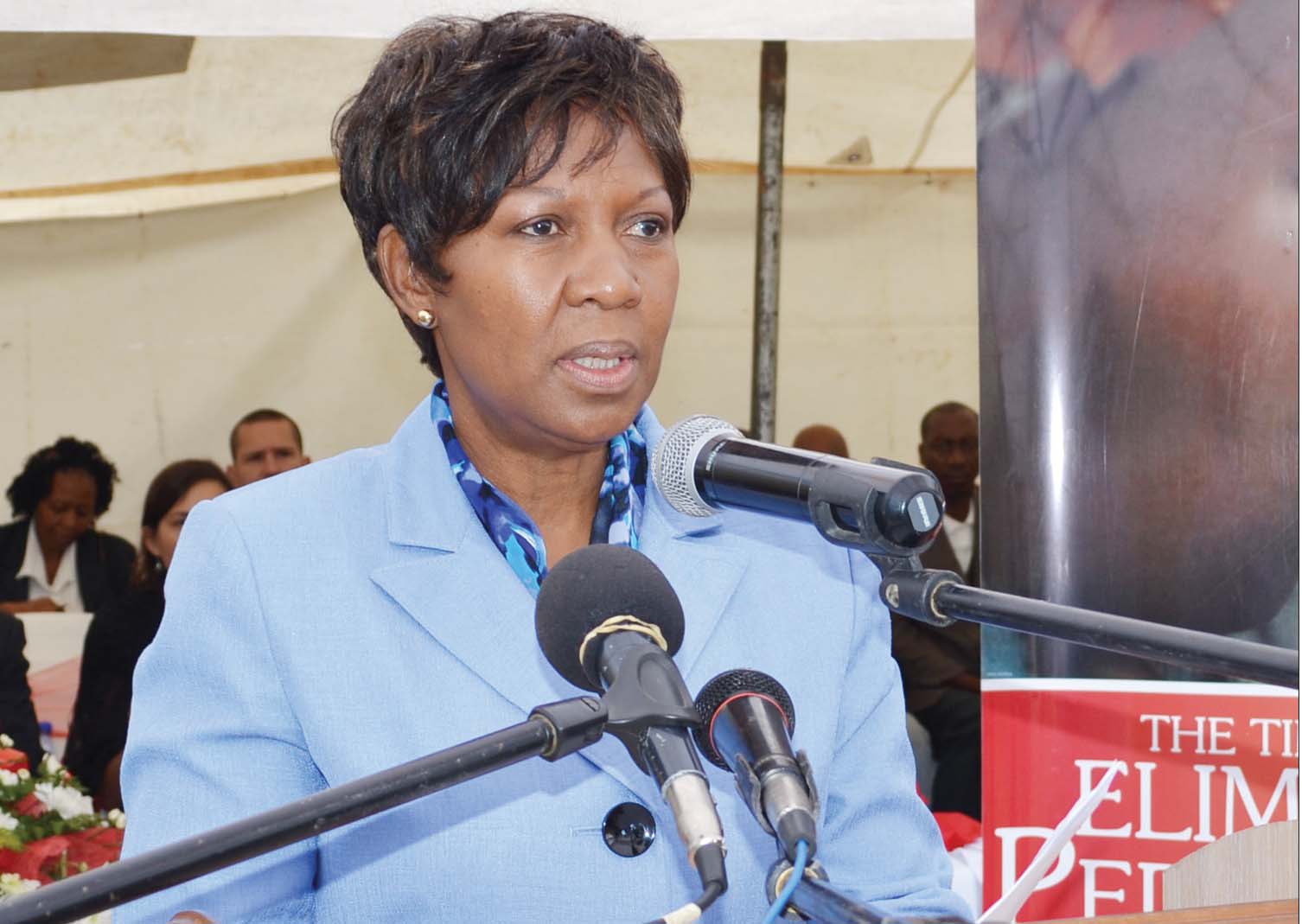 Prime Minister Thomas Thabane officially opened Queen Elizabeth II District Hospital on Friday last week following the facility’s closure in September 2011. In his address, Dr Thabane said Lesotho needs all the hospitals it can have, and condemned Queen II’s closure by the previous government led by Dr Pakalitha Mosisili. Explaining why the country’s then national referral hospital was being closed after 100 years of service, the then government cited its extremely dilapidated state. Meanwhile, Health Minister, Dr Pinkie Manamolela also spoke at Friday’s opening ceremony and revealed Lesotho is now training its own doctors. In this wide-ranging interview with Lesotho Times (LT) reporter, Lekhetho Ntsukunyane, Minister Manamolela gives more details on the medical school and also what the future holds for the country’s healthcare system.

LT: In your address at the official opening of Queen II District Hospital on Friday last week, you gave an overview of the country’s healthcare system and also said Lesotho now has a medical school. Could you please elaborate on how this school came about?

Dr Manamolela: Although it has not yet been officially launched, the Lesotho Medical School, which is the first of its kind in this country, started operations on 1 September 2014 with an enrolment of 40 students. Perhaps I should first start by indicating that the establishment of this milestone project comes through an arrangement between Lesotho and Zimbabwe. In 2011, there was an agreement signed between these two countries and under the arrangement, Basotho were to take up medical studies at the University of Zimbabwe (UZ). The first batch of 40 Basotho students was enrolled in 2011, with the second, still comprising 40 students, being enrolled in 2012. In 2013, there was a third batch although the number had now been decreased to 25 students. Of course, there were issues around this, with the UZ citing lack of space and facilities to enroll the required numbers. I should explain that it was further agreed that while Lesotho continued sending students to Zimbabwe, the country should also start preparations to establish its own medical school. We are expecting the first batch which went to the UZ in 2011, to come back after four years and do practicals here under the supervision of the now-established Lesotho Medical School. Queen ’Mamohato Memorial Hospital (which replaced Queen II as the country’s main referral hospital) will also assist because of its good facilities and experienced doctors. When the current coalition government took over in 2012, we inherited this good initiative from the previous government. Being the Minister of Health, I insisted that  because this was a good arrangement highly beneficial to Basotho, we should embrace it. I always maintained that we should continue with the good programmes initiated by the previous government, while we let go of those that do not benefit our country.

LT: But where is this medical school located?

Dr Manamolela: The Lesotho Medical School is currently operating at the NHTC (National Health Training Centre) in Maseru. We chose NHTC over NUL (National University of Lesotho) for several reasons, but mainly stability and convenience. And like I said, the first batch of 40 students was enrolled this year. This, I should emphasise, is a different batch altogether from the three groups we sent to Zimbabwe. However, the first group we sent to Zimbabwe in 2011 will undertake part of its studies at the Lesotho Medical School for six months, beginning this year. After the six months, the group will go back to Harare to complete their fifth and sixth academic years before they graduate. People should trust this arrangement and support the programme; it has proved to be very fruitful in other developing and even developed countries.

LT: Who are the lecturers at the medical school, and do you have adequate resources for this very demanding programme?

Dr Manamolela: The issue of lecturers is a challenge that is still being addressed. We have been mobilising lecturers from other countries, with more emphasis on South Africa as our immediate neighbour.  But you see, the problem is we have many Basotho doctors and intellectuals working abroad, who left this country because of lack of support from government. There was lack of political will in the previous governments to retain Basotho doctors and intellectuals. When I came into office on 27 June 2012, I committed myself to bringing back all Basotho doctors from all over the world. Believe me when I say sometimes I spend sleepless nights thinking about how best I can convince our doctors to come back. I make sure that on each and every trip I take out of the country, I make it a point to lure Basotho doctors and nurses, back to Lesotho. But what do I promise them? That is the million-dollar question and a big challenge for me. But through the grace of God, I have managed to bring back about 12 of our doctors. It’s surprising because I didn’t promise them better wages and didn’t talk about benefits, which of course, are better than ours out there. I just convinced them of how important it is for them to come back and practice in their own country, something nobody did in the past government because there was no political will to do so. All they needed was for the government to show a little support. Now, coming to your question, the Lesotho Medical School currently has a few lecturers who are working part-time. They are medical doctors running their own businesses, while others are employed by government. However, the human resource structure, like I said, is not yet complete, although we have already filled positions of Dean of Students and his deputy, which are crucial in any institution of higher learning. We are getting there because recently, I was informed that there were new applications from some Basotho doctors who are practicing in South Africa, who would want to come back. What remains another mammoth challenge is the issue of accommodation for the lecturers. You see, because they come from afar, we need to make good preparations for their stay as they come on a part-time basis. We also need more buildings; a library to be exact. But all those issues are being addressed.

LT: What can we expect out of this programme? I mean, are we going to have specialist doctors out of this initiative?

Dr Manamolela: We are not going to have specialists yet until hopefully, we realise our dream in 2016. You see, we have a vision that by 2016, we should start enrolling Basotho for a post-graduate medical degree where will now have specialist doctors. And while we are doing this, we are also making sure we have a good retention strategy because if we don’t, there won’t be any reason why we should be continuing with this highly expensive programme. This is a very serious programme not only supported by the government of Lesotho but also many other foreign institutions and non-governmental organisations. And to mention but a few, we have the UZ and Colombia University supporting us in terms of providing the curriculum. We have organisations such as WHO (World Health Organisation), Rotary Club and ICAP (International Centre for AIDS Care and Treatment Programmes) also supporting us. You see, the issue of establishing a medical school in Lesotho, although only being implemented this year, comes a long way. According to the records, it was initiated in 1974, but failed to materialise until now. Somewhere in 1978, the records show it was resuscitated but still failed to materialise. I was recently having a conversation with the Prime Minister (Thomas Thabane), who spoke of how, during the earliest governments, they had fought for the establishment of the school but in vain. I should consider myself lucky that Lesotho has realised this milestone programme during my tenure. I also worked tirelessly to make sure the school is established despite the slim chances that this was feasible, which is why I am so proud that we now have our own medical school.

LT: What are the requirements for admission into the programme?

Dr Manamolela: I am not quite part of the admissions panel, but I noticed most of the students hold BSc (Bachelor of Science) degrees while others have Nursing qualifications and  B. Tech (Bachelor of Technology) degrees. I should also mention that the programme is not only piloted by the Ministry of Health on behalf of the government of Lesotho, but also the Ministry of Education and Training, and the Ministry of Development Planning.

LT: With the recent reopening of Queen Elizabeth II District Hospital, what can we expect in relation to the programme?

Dr Manamolela: The reopening of Queen II simply means our graduates are going to be deployed at the hospital and elsewhere in the remote areas of our country. We still have areas where it remains difficult for patients to access a doctor – the closest treatment they can get is through a nurse. In other countries, the ratio is one doctor to 500 patients, while in Lesotho, it is one doctor serving 20 000 patients. The worst thing is that almost all the medical doctors serving in Lesotho are foreigners. Actually, we have eight Basotho doctors in Maseru, two in Berea, two in Leribe, two in Mafeteng, two in Mohale’s Hoek, one in Butha-Buthe, one in Mokhotlong, one in Qacha’s Nek and one in Quthing. All in all, we only have about 20 Basotho doctors serving in public health centers throughout the country. The rest, who constitute the larger percentage, are foreigners. You should remember that out of the 20 Basotho doctors that we have, I have personally brought 12 back into the country since 2012, which means the situation was worse before then. I should also talk about the Lesotho Boston Health Alliance (LEBOHA), which is a post-graduate medical study programme introduced in Lesotho by the Boston Medical School in 2003. Through this programme, Basotho medical doctors were supposed to take part-time studies to become specialists. Three medical institutions should have been established in the South, North and Central regions of the country, but the previous government was not keen to implement that good programme. As we speak, only two doctors were produced through that programme through the only existing institution in the Northern region, at Maluti Hospital. I recently sought capital for new applicants from Global Fund to assist eight local doctors to undertake the programme as I am trying to resuscitate it.