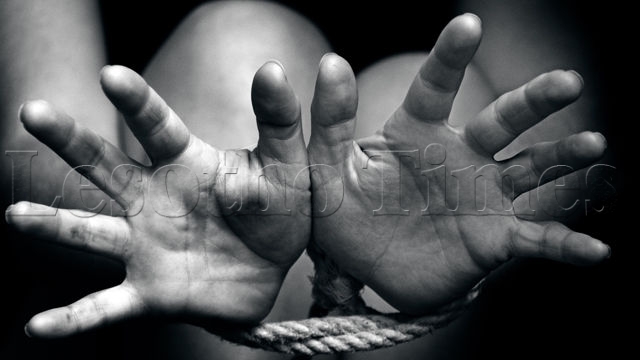 NEWLY appointed principal secretary in the Ministry of Home Affairs, Tumelo Raboletse, says he is working on transferring some top immigration officers and other staffers in his ministry as part of efforts to combat human trafficking.

Some of those earmarked for transfer include immigration manager ‘Mapeete Jonathane and the director of the immigration department, ‘Mantšebo Motšoanakaba.

Others who could be transferred from their current work stations include officers at the Moshoeshoe I International Airport and the Maseru Border Post. The two ports of entry are said to be hotspots for human trafficking which threatens Lesotho’s eligibility for the multi-million-dollar second compact under the United States (US)’s Millennium Challenge Corporation (MCC).

Last month, US Ambassador to Lesotho, Rebecca Gonzales, and the MCC’s Acting Vice President for Policy and Evaluation, Tom Kelly, warned that Lesotho could lose out on the second MCC compact due to its failure to address long-standing eligibility concerns including human trafficking.

Of particular concern is the previous Thomas Thabane administration’s failure to address the thorny issue of human trafficking both within the country and to other countries especially to South Africa.

The US government defines human trafficking as “modern day slavery” which involves the movement of persons locally and beyond a country’s borders against their will to get them into forced labour, involuntary servitude and debt bondage.

So serious is Lesotho’s failure to address the scourge that the country has even been placed in Tier 3—the lowest tier in the US State Department’s trafficking in Persons (TIP) Report for 2020.

Ms Gonzales said, under normal circumstances, a country in Tier 3 on human trafficking like Lesotho would have already lost all development assistance from the US.

However, she said she had recommended a waiver of any punishment against Lesotho to enable Dr Majoro to act on the issue since he had only assumed office in May this year. His failure to take concrete steps forthwith would however result in Lesotho losing out, she said.

These steps include investigating allegations of official complicity in human trafficking and prosecuting the wrongdoers.

The government has been given up to February 2021 to act or risk losing the second MCC compact.

It is on this basis that Mr Raboletse, who was appointed PS in August 2020, wants to act against immigration officers and other home affairs staffers as part of efforts to deal with the scourge which is rife at the country’s ports of entry.

His moves to transfer the staffers has however, allegedly been met with resistance by the concerned officers like Ms Jonathane and Motšoanakaba. According to well-placed sources, the duo feels they are being unfairly targeted on unclear grounds “despite diligently executing their duties”.

Mr Raboletse confirmed that he was considering transferring some key personnel to combat human trafficking.

“I am considering transferring some officers and there has been so much resistance for reasons that have not been communicated to me,” Mr Raboletse told the Lesotho Times this week.

“But there is nothing sinister or malicious about those transfers. I am just following a government directive as part of my mandate to curb the rise in human trafficking.

“True enough, this has brought some misunderstandings and tensions between me and the affected officers. But this exercise will happen against all odds. I am also working on a draft on anti-human trafficking bill to be tabled in parliament soon,” he added.

Ms Jonathane this week told this publication that she had heard of plans to transfer her and she was still waiting for official communication on the issue.

“I have heard about the transfer but I have not received any formal communication. If it indeed happens, I will go. I have no reason at all to refuse to comply as I am just a civil servant who takes orders and I have nothing to lose,” Ms Jonathane said.

Ms Motšoanakaba said she was not ready to speak on the issue.