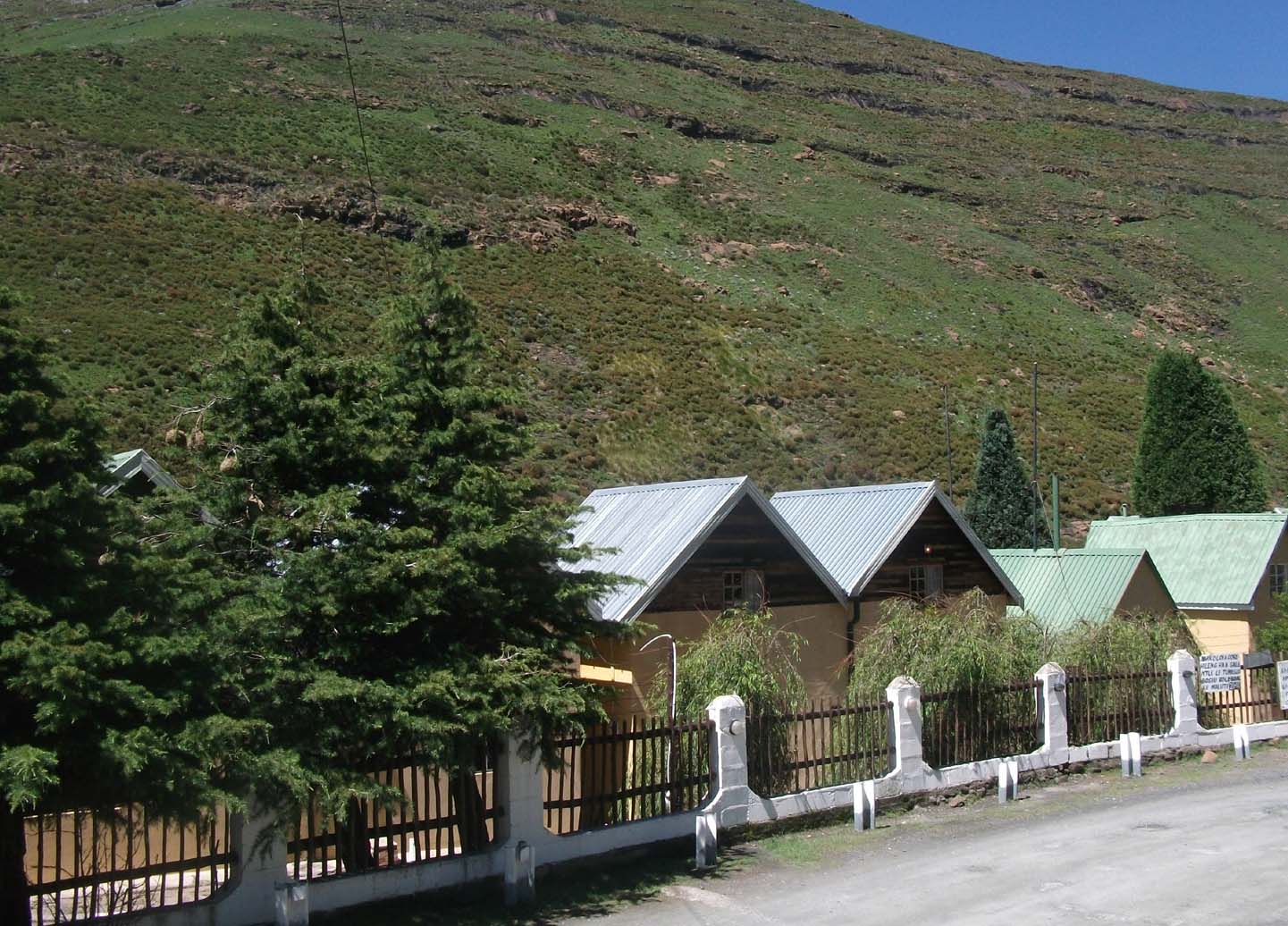 If you are seeking a holiday in the sky, look no further than the New Oxbow Lodge —
an astounding place, situated in the enchanting Maluti Mountain Range in northern Lesotho
By Tsitsi Matope

BOTHA-BUTHE — Nothing beats the seren­ity of not only being away from the hustle and bustle of the capital Maseru, but residing in a place 2 700 metres above sea level and breathing arguably the freshest air on earth that seemingly cleans the lungs with every breath.

This is the kind of sensation one gets upon visiting the New Oxbow Lodge — an abso­lutely beautiful haven nestled in the wild but enchanting Maluti Mountain Range in north­ern Lesotho.
Situated approximately 180 kilometres north of Maseru and 60 kilometres from the district capital Botha-Buthe, the facility has so much to offer and caters for pretty much every taste.

It is this diversity which attracts a wide range of tourists from all over the world.
Englishman Sydney Matthews and his wife Carrey were among the guests at the lodge last week.
The couple came to Lesotho a few days be­fore Christmas and has since been sightsee­ing the northern districts of the country while staying at the New Oxbow Lodge.

“We came here for Christmas after friends spoke highly of this place,” said Sydnet, 54. “We love everything about the facility and area; it’s absolutely beautiful.”

Carrey also spoke of the “mesmerising beauty” and peaceful nature of her surround­ings, which have made the lodge a prime des­tination for the discerning and outdoor-loving tourist.
“We decided to stay here for a while to see the innumerable bird species, lots of fish and of course the beautiful scenery,” Carrey add­ed.

Tourists who stay at the lodge range from those seeking solitude, adventure, fitness-training, quality time with loved ones to those looking for a snowy African winter.

Travel enthusiasts wishing for the trip of a lifetime, can look forward to a holiday in the sky since that is exactly where they would be when staying at the New Oxbow Lodge — where the endangered bearded vulture is still able to flap its mighty wings as it majestically takes off in the crispy air.
The shimmering, dark-green and deep wa­ters of Malibamatšo River just nearby create a beautiful background, adding sparkle to an already magical scene.

The Malibamatšo’s source is high up the nearby peak, with the unpolluted water gracefully tumbling into the river between the mountain and the New Oxbow Lodge.

The river is a fisherman’s paradise, and anglers catch the striking Rainbow Trout for sport, throwing the species back into the ice-cold water.

The fishing season, according to the Lodge’s Front Desk and Customer Service Officer, ‘MaChristmas Mphafolane, begins in Sep­tember and ends in April.

Winter months, Mphafolane added, are the fish breeding season. And during winter, the lodge is usually fully booked as the landscape is transformed into snowy-white wonderland. The snow appears to clothe the whole area in a carpet of fluff.
This is also a time when everything tends to freeze, from water-pipes to the toilet cis­tern. Meanwhile, at the New Oxbow Lodge visitors will be reveling in such conditions which are ideal for skiing or just watching the snow from the comfort of the lodge.

“June, July and August are the best months which bring the most satisfaction to avid skiers,” Mphafolane said. “The snow has a mystical effect that cleans and refreshes the body and mind. Visitors leave here re­newed. It’s amazing.”

The ski-slope at the Afri-Ski has a two-ki­lometre run — the longest in southern Africa.
It is situated 11 kilometres from the lodge.

Rivers and waterfalls also freeze in winter, creating an ideal environment for ice-climb­ers who can also enjoy ice-skating on natu­rally frozen river ponds.

“It’s not just about snow during winter. This is a very exciting time for us and we prepare lots of special hot meals, soups, and chocolate drink for the after-fun,” Mphafo­lane added.
While winter is regarded as the highlight of the year in the area, the Butha-Buthe heights play host to 4×4 aficionados, quad clubs and bikers all year round. The rugged terrain appeals to hikers and bikers keen to put their determination and skills to the ul­timate test.

Because of its seclusion, the New Oxbow Lodge is also an ideal place for conferences, Mphafolane said, adding “especially if organ­isers would like to make sure participants don’t always dash-out for some quick shop­ping during important sessions”.
The New Oxbow Lodge has a rich history that dates back many years.

Although there is evidence that this was once home to the San people as shown by the rock-paintings and caves in the area, the establishment, according to Mphafolane, came into being in 1971 when two brothers from the United Kingdom were exploring Lesotho. It was during winter and after they were caught in a snowstorm, the brothers de­cided to pitch tents in the Oxbow area, Mpha­folane said.
“The name Oxbow comes from the shape of the mountain close-by that resembles the bow of an ox,” explained Mphafolane.
As the brothers and their friends were outdoor-enthusiasts, they would return with friends from time to time to the same spot.

“The brothers became interested in estab­lishing a permanent structure, whose owner­ship changed over time,” Mphafolane said.

Poor road infrastructure had been the ma­jor challenge for visitors to the lodge, with only those with powerful, four-wheel drive vehicles, being able to traverse the old thor­oughfare.
“Before a good road was constructed, it took the whole day to travel to Oxbow from Butha-Buthe,” Mphafolane said.

The old road can still be seen on the other side of the mountain.
In 1978, the existing owner, Costa Cocco­sulis, took over before the old lodge was com­pletely destroyed by runaway fire in 1981.

The old facility had been entirely built from timber and grass.
“This is why the current facility is referred to as the New Lodge. It was constructed us­ing some material that is fireproof to reduce the fire risk.”

Other interesting places in the area are Letšeng Diamond Mine, Kao Mine and Katse Dam.
Lesotho Tourism Development Coop­eration chief executive officer, Mpaiphele Maqutu, who visited the area last week on a tourism promotional tour, said Lesotho is en­dowed with so much beauty which the world needs to experience.

“With our fascinating scenery, we are a tourism gem. Indeed, any tourist who has never been to Lesotho should definitely come and experience the magic of being on the world’s highest land and in some places, hav­ing the clouds right above the head,” Maqutu said.

The LTDC, he added, would like to facili­tate the cautious development of infrastruc­ture and tourism products without destroying the natural essence that makes the Lesotho tourism brand exceptional.

“That way, we can go a long way to cater for the different needs of our tourists, and also protect the natural resources for a more sus­tainable sector,” he said.

He added that currently there is a strong move to intensify the development of facili­ties through private sector engagement par­ticularly in the Lesotho highlands tourism hot spots.
“We need more facilities like the New Ox- Bow Lodge in the highlands,” Maqutu said.
“This would augment the already existing facilities such as Liphofung Caves, Bokong Tourist Center and the newly-constructed Bokong chalets, Likileng Village and others.”

Maqutu there was also an aggressive drive to work closely with South Africa’s provincial tourism agencies such as those representing KwaZulu Natal, Free State and the Eastern Cape provinces.
“We are eager to develop joint products that would give the tourists an ecotourism adven­ture-filled and boundless kind of experience which will no doubt be unforgettable by any stretch of the imagination.”