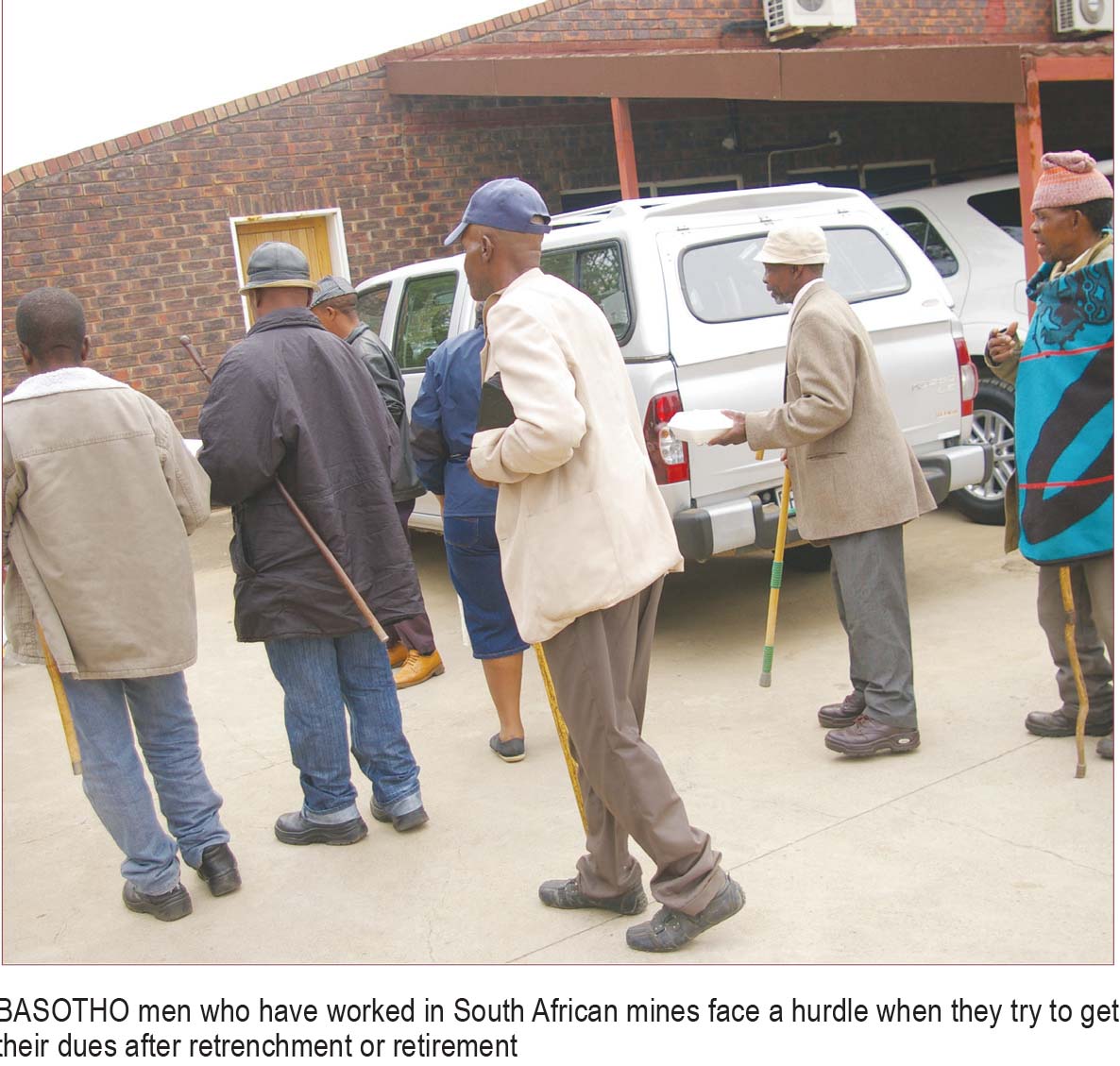 A complex mixture of labour-related, social, economic and family problems has, for generations, dogged Basotho mine workers who go to toil for a living in South African mines.

Not only do they have to contend with the challenges that any migrant faces in the host country’s labour market, they sometimes end up enmeshed in serious social problems of broken families and dysfunctional marriages. This because of the prolonged periods they spend away from home.

In the end, these conditions are the seed-bed for transmission of the HIV virus whose devastating effects have nearly rendered Lesotho a wasteland.

The brokenness that characterises the lives of these miners is exacerbated by the fact that upon death their dependants are in most cases left, not only without the financial means to sustain themselves, but without even the basic knowledge of how they can pursue and recover their breadwinners benefits from South Africa. In some cases, as Labour and Employment Minister Lebesa Maloi explained this week, many of the mine workers die without leaving any wills. Even if they do, some of their dependents are ignorant about how to access the benefits left for them by their deceased.

As a result, thousands of former Basotho mineworkers’ families are losing out on the M5,7 billion in unclaimed pensions held by organisations such as the National Union of Mineworkers’ Provident Fund  and other retirement pensions funds in South Africa.

In Lesotho, such monies are unclaimed either because the deceased miner did not leave a will or even if a will was left, internal conflicts within families about who the rightful beneficiary ought to be make any claims impossible.

Sometimes the conflicts end up in the courts. In such instances, some widows lose out because of lack of interest and resources to fight the tedious court processes.

The casualties, in the end, are the minor orphaned children who then face the long struggles of finding food and paying for a decent education. Ultimately, this simply perpetuates the vicious cycle of poverty.

In many other instances, the miners are their own worst enemies. They establish “small houses” once they settle in South Africa. The demands of maintaining two families in both South Africa and Lesotho from their paltry salaries become insurmountable. The family left in Lesotho ends up struggling.

Considering that South African mines are a key source of employment for Lesotho, the social problems around our miners need concerted intervention by all stakeholders to ameliorate the burdens they end up imposing, not only on the miners themselves but on the entire country.

Maloi’s visit to the miners in different parts of South Africa is therefore instructive.

We can only hope the Memorandum of Understanding (MOU) which he signed with his South African counterpart will help resolve the plethora of social and economic vicissitudes saddling our migrant labour miners.

The miners ought to be a source of wealth for this country and contribute to economic development not only by money remittances, but through garnering and sharing critical industrial knowledge with those back home.

The advice proffered to the miners by Maloi and his delegation to avoid vices like bigamy and dying without writing wills is equally instructive. It is in the long term interests of the miners themselves and their families to heed this advice.

While some of the problems faced by the miners are within their own control, others fall fittingly within the Lesotho government’s own governance arena.

These ought to be dealt with speedily and easily. The issue of passports is poignant. The sluggishness and – for a lack of a better word – the rottenness, that had long defined our passport office’s performance must become a thing of the past.

It’s disgraceful that many miners had to resort to border-jumping to get to their workplaces because they could not easily renew passports.

The envisaged special facility in which miners applying for passports can go through the Employment Bureau Agency (TEBA) for expedited processing at Home Affairs must not turn out to be yet another ministerial promise. It must be implemented forthwith.

The miners are a key economic segment for Lesotho. Their problems are not theirs only. They are for this entire nation to face and resolve.