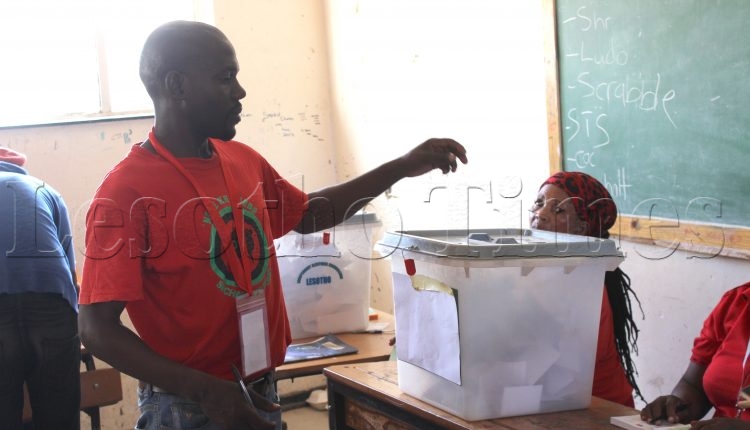 . . . electoral body “shocked” by the decision

THE government has cancelled parliamentary by-elections in six constituencies as well as some local government elections, citing budgetary constraints.

It has instead ordered the Independent Electoral Commission (IEC) to prepare for next year’s general elections.

The decision was communicated by the Ministry of Finance’s Budget Controller, Maleshoane Lekomola-Danziger, in a 3 June 2021 savingram to the IEC’s Acting Director of Elections, Advocate Lehlohonolo Suping.

Ms Lekomola-Danziger said the by-elections had not been provided for in the 2021/22 budget.

This has however, “shocked” the IEC which says by-elections are never budgeted for as they are contingencies which cannot be foreseen. Instead, they are financed from the contingency fund, the IEC says.

The by-elections are overdue in the six constituencies of ‘Makhoroana, ‘Maliepetsane, Thupa Kubu, Mohale’s Hoek, Kolo and Qacha’s Nek. The constituencies are currently without representation following the deaths of their legislators between 2019 and 2021.

The Qacha’s Nek vacancy arose after the former incumbent, Pontšo Sekatle, stepped down to become Lesotho’s ambassador to Belgium and the European Union in February this year.

In her savingram, Ms Lekomola-Danziger wrote, “Your office is kindly informed to note that the budget for by-elections was not included in the 2021/2022 budget estimates.

“Therefore, our recommendation is that IEC should begin preparations for 2022 general elections,” Ms Lekomola-Danziger added.

In an interview with this publication, IEC public relations manager, Tuoe Hantši, yesterday said they were shocked by the savingram, especially as it had been authored by a civil servant and not the cabinet or any of the political authorities.

“It is true that the budget controller (Lekomola-Danziger) has written to the Acting Director of Elections about the M20 million funding that we had requested for the constituency by-elections and 45 electoral divisions in the local government in nine districts excluding Thaba-Tseka,” Mr Hantši said.

“The IEC is shocked that the conversation between the Acting Director of Elections and the Budget Controller has resulted in her telling the IEC to abandon the elections. It would have been enough for her to simply say there is no money, not to tell the IEC to concentrate on the (2022) general elections.

“Truly speaking, that shocked us but there are ongoing talks between the government and the IEC. It is expected that the Minister of Finance (Thabo Sophonea) will meet the IEC to look into this matter before it is taken to cabinet.

“We cannot say the budget controller is a government authority. She is a civil servant and government has to pronounce itself on whether it is going to assist us with the money or not. Again, the normal practice has always been that government would finance by-elections from the contingency fund.

“By-elections are emergencies caused by deaths or resignations. We have always held by-elections that were not budgeted for and the money would be drawn from the contingency budget. Even now, we thought we would be given money from the contingency fund. The commission will talk to government authorities and a decision will be made by the cabinet as has always been the case,” Mr Hantši said.

He said the National Assembly Electoral Act of 2011 clearly states that the IEC must conduct by-elections to fill any vacancies provided they arise at least six months before general elections are held.

On his part, Finance Minister Thabo Sophonea suggested that he would not provide any funds for the by-elections budget. He said the IEC should not expect his ministry to cut other ministries’ budget to accommodate the by-elections.

“How can I issue a statement on the matter when the budget controller is in discussion with the IEC, which leaks it to the social media after receiving it? The budget controller is simply saying, I don’t see any budget heads where you asked for funds to be allocated for the by-elections and instead you budgeted for constituency demarcations and cleaning up voter registration as part of preparations for the upcoming national elections.

“Why can’t you go ahead with the activities that you budgeted for instead asking us to give you money for things you didn’t budget for? Whose budget should we slash to accommodate your own activity which you failed to budget?

“The fact that the by-elections are a legal requirement does not mean we must cut budget for other institutions to accommodate them. The IEC must look for money within their own budget heads. It must compromise and forego other things in order for them to hold these elections.

“We don’t have an extra budget, in fact we have a budget shortfall,” Mr Sophonea said.

Although the ministry has cited budgetary constraints for pulling the plug on the by-elections, former ruling All Basotho Convention (ABC) deputy leader Nqosa Mahao recently told the Lesotho Times that the ABC was scared of the polls as they would lose in the wake of the party split in April this year.

The ABC split after Prof Mahao dumped it to form the Basotho Action Party (BAP). He cited an alleged plot to oust him as his reason for leaving. He said the plot was orchestrated by Prime Minister Moeketsi Majoro, ABC leader Thomas Thabane and party secretary general Lebohang Hlaele. Nine ABC MPs joined him in the BAP. A 10th legislator, Tefo Mapesela, also left to form his own Basotho Patriotic Party after falling out with Dr Majoro.

Prof Mahao said his party was itching to lay down the marker to all its rivals by contesting and winning the by-elections. He, however, said he did not see them being held because the ABC was in disarray and would be embarrassed in the polls.

His comments followed Mr Hlaele’s earlier remarks in an interview with this publication where he said his party was of the view that holding the by-elections when the general elections were just around the corner would be an unnecessarily costly exercise.