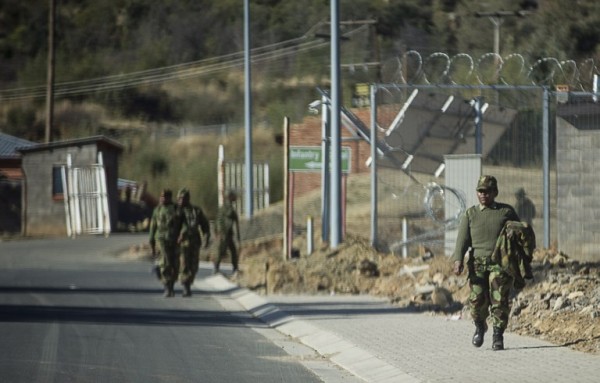 EIGHT soldiers this week appeared before the Maseru Magistrates’ Court jointly charged with the murder of three men who disappeared following a shooting incident at the border post in May this year.

An army officer and a street vendor died during the shooting.

Following the disappearance of Lekhoele Noko, Molise Pakela and Khothatso Makibinyane, their relatives reported them missing and approached the High Court demanding the police and the army to hand over their bodies.

It is alleged that following the shooting incident at the border post, Messrs Noko, Pakela and Makibinyane were arrested and later released by the police. However, the trio did not make it home, prompting an investigation by the police.

According to police investigations, the soldiers allegedly strangled Messrs Noko, Pakela and Makibinyane at Setibing in rural Maseru on 16 May 2017.

They were remanded in custody to 2 October 2017, pending their bail application at the High Court, as procedure demands with all murder cases.

The eight army officers’ appearance at the Maseru Magistrates’ Court coincided with proceedings at the High Court where relatives of Messrs Noko, Pakela and Makibinyane are seeking legal arbitration in the matter.

A lawyer representing the relatives, Attorney Khotso Nthontho, on Tuesday told High Court Judge, Justice Semapo Peete, that some members of the LDF were charged with murder related to the disappearance of Messrs Noko, Pakela and Makibinyane. The three, he explained, were also the subject matter of the court’s ongoing inquiry into their whereabouts.

This latest development led to the postponement of the case to 31 October 2017 to allow time to monitor murder proceedings in the lower court.

New development plan in the works