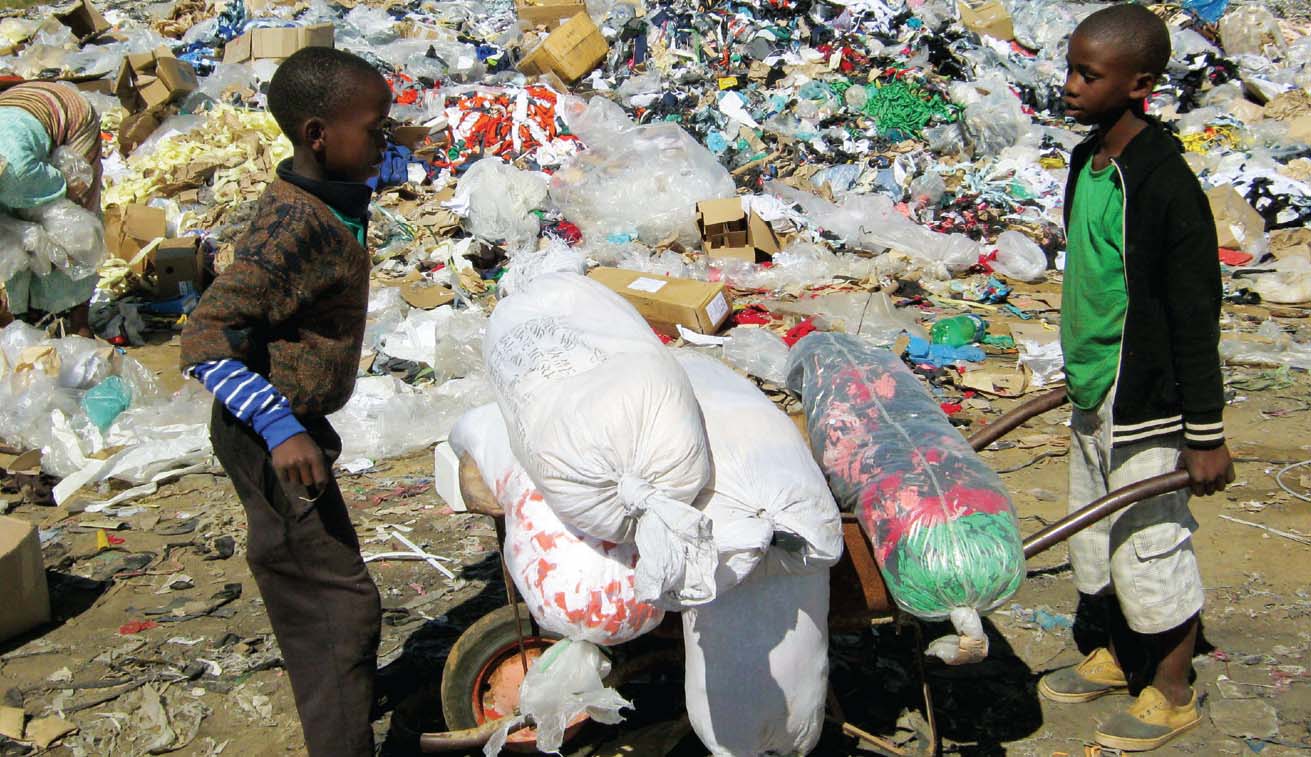 An obvious health hazard to the town, the Maputsoe dumpsite is, however, also a source of livelihood for many families and its closure could spark an outcry from some members of the community.

MAPUTSOE — From a distance, the area appears to be covered in white foam, with the sight of people about the site giving the impression of an appealing, if not an exciting place.
But this perception is rudely dispelled upon closer inspection — with the stench of decomposition becoming stronger as one gets nearer to what eventually emerges as a dumping ground for Maputsoe’s industrial waste.

Located in the Nyenye Industrial Site, the Maputsoe dumpsite is, without doubt, a health hazard. The dumping ground, which is on the banks of the Mohokare river, is littered with discarded industrial cloth, cardboard boxes, broken glass, plastic bags and bottles as well as rotting foodstuffs such as beans, bread, rice and meat.

Yet this waste is what attracts scores of Maputsoe residents, who then patiently wade through the rubble and rot to salvage whatever they can for resale or their own use.
Children as young as five years can also be seen working on the site, as they help their parents select what could eventually put food on the family table, or even help send them to school.

A 45-year-old man who agreed to speak to the Lesotho Times on condition of anonymity, said due to destitution, the Maputsoe dump site had become a source of livelihood for many impoverished families.
“People come here every day looking for anything they might find useful for use in their homes, or sell to earn a bit of cash,” he said.
“But what is particularly popular here is the dumped industrial cloth, which our women use to make dresses and sometimes pillows, for sale or their own use.
“Many of the people you see here are unemployed; they have no other choice but to come here to see what they can salvage for survival.”

The father-of-two, who told the Lesotho Times he always goes to the dump site to look for leather discarded by the town’s shoemaking industries, further said he uses the pelt to make shoes and handbags, which he sells on the streets of Maputsoe.
“If it wasn’t for these daily trips I make to this dump site, I would be dying in poverty.
“I know of the health-hazard this dump site poses, but there is nothing else I can do if I am to survive,” he said.

On the other end of the dump site, the Lesotho Times witnessed three women scooping maize-meal spilled on the ground, and putting it into buckets. Another woman could also be seen picking some rotting beans from the ground, and carefully putting them into a basin.

The woman collecting the beans said she was only taking “the best” from the pile for sale on the streets of Maputsoe.
“I put the beans into this bowl, and when I get home, I wash them and package them into small plastic bags which I sell to the people in the village.
“I don’t make this trip every day; I only come here when I feel I might find something useful,” she said.
The woman, from Ha Maqele, said she was unemployed and survived by selling traditional Sesotho beer.
“I sometimes come here to collect cardboard boxes which I use as firewood to prepare the beer with. I feel lucky that today, I came across the beans, which means I am going to make some extra income,” she said.

However, the woman expressed concern the dump site is a health-menace not just for those who have made it their source of livelihood, but the whole town of Maputsoe.
And while the Lesotho Times was on the site, young boys and girls, some in school uniform, could be seen rummaging through the waste, apparently oblivious of the overpowering stench and risk involved.
“Some people come here just to take rotting food and eat it. It is not healthy at all. There is need to regulate the flow of people into this area, otherwise people will get sick, especially the children,” she said.

Meanwhile, a group of concerned villagers from Ha Nyenye and Pukalla, have formed a pressure-group which seeks to lobby the town council to shut down the dump site.
The group’s spokesperson, ‘Matšepo Lehlokoana said the area was not only a serious health hazard, but also growing with each passing day.
“The trucks which dump waste here do not have a specific place to drop off their stuff, but off-load it anywhere they find convenient,” Lehlokoana said.
“Because of this random disposal, the area covered by the waste is growing daily.
“If nothing is done to stop this, the truckers will soon be dumping their waste on our doorsteps. This is why we want the dumpsite closed.”
Lehlokoana said she was aware there were residents who go to the dump site to earn a living.
“We are fully aware of the fact that some people find the dump site useful. In that case, we are calling on the authorities to regulate the area so that only authorised people can go to the site.”
Lehlokoana said another option would be to fence-off the site so that children do not easily make their way into the area.
“As of now, everyone goes in there freely and our children are in great danger because the dump site is next to a school. The smell from the site also affects the children when they are at school,” she said.
“Also, there are times when the waste starts burning on its own, and the smoke that comes from there is simply unbearable.
“Our group seeks to work with the authorities in coming up with working solutions to this problem. ”

Repeated attempts to meet the chairperson of the Maputsoe Urban Council were unsuccessful.

Why companies need to re-register