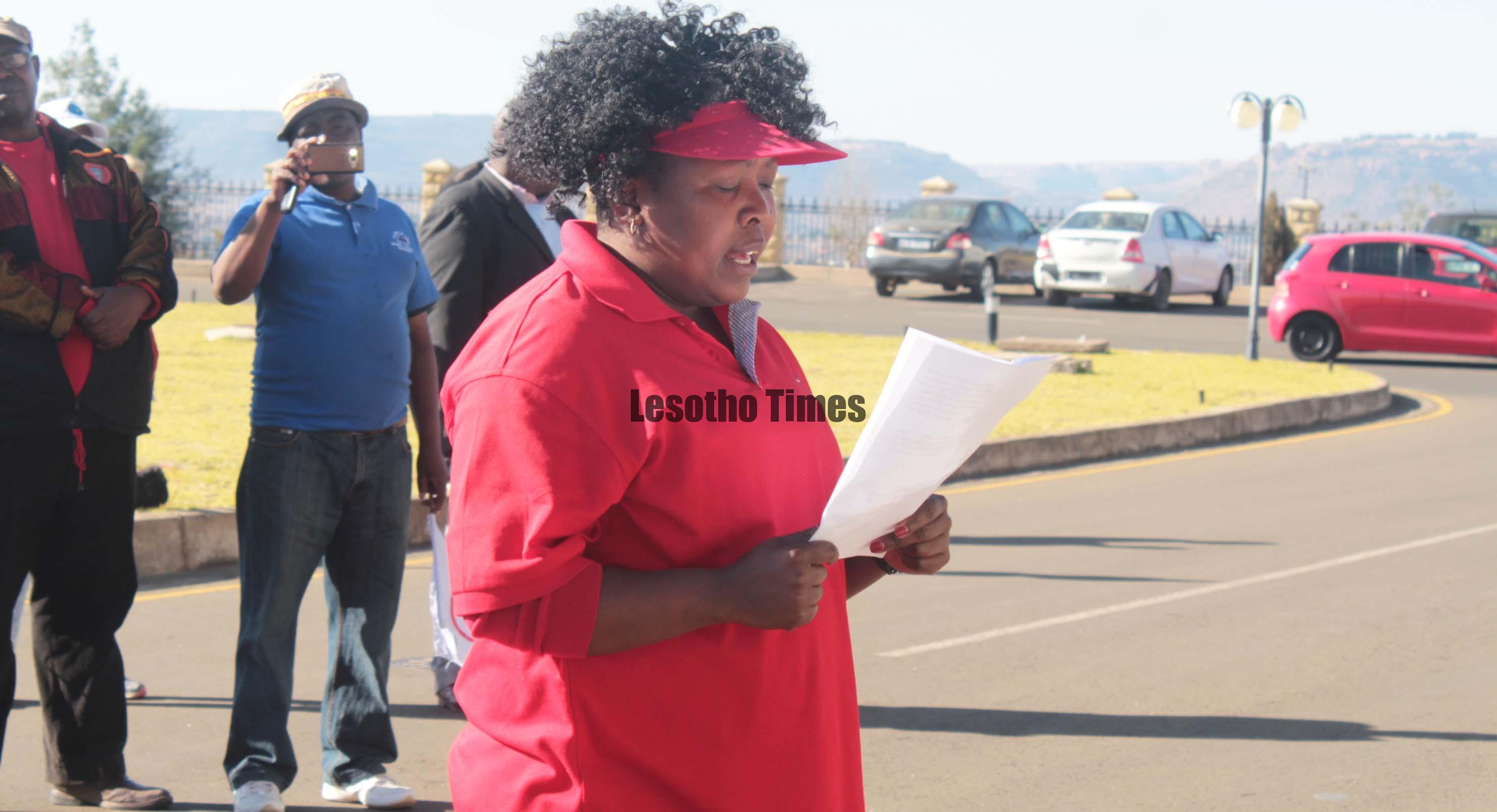 THERE were dramatic exchanges between Prime Minister Thomas Thabane and thousands of angry workers who demanded that the premier fire Labour Minister, Keketso Rantšo, whom they accuse of neglecting their welfare.

The thousands of workers this week converged at the Moshoeshoe 1 monument in Maseru where they delivered a petition to Dr Thabane  demanding salary increments for all workers.

“As the alliance of trade unions of Lesotho, we demand the immediate release of a government gazette on the minimum wage before 30 June which must be effective from 1 July,” the workers wrote in their petition which was handed over to Dr Thabane.

“We demand an increment of 15 percent for other workers and M2000 for factory workers.

“We also, with all due respect, urge you (Ms Rantšo) to resign immediately from your post as you have shown no interest in our welfare and our livelihoods”.

The workers had a hoped to deliver the same letter to Ms Rantšo but they could not do so as she did not attend the gathering which was also attended by several government officials.

Upon receiving the petition, Dr Thabane addressed the protestors and told them he was just as clueless as they were about the whereabouts of Ms Rantšo.

“I am embarking on these issues in the absence of your minister. I should be asking you where your minister is because she hasn’t asked me for a leave of absence. I am just as perplexed as you are as to where she could be,” Dr Thabane said to howls of disapproval and demands that he sack  Ms Rantšo immediately.

The protestors also made hand gestures to press home their demand for Ms Rantšo to be fired and Dr Thabane responded by asking, “Who should I expel when she is not here?”

Dr Thabane eventually promised to respond to the workers’ grievances within 14 working days from Monday this week, saying the matter needs to be dealt with urgently.

However, the youth league president of her Reformed Congress of Lesotho (RCL) party, Retšelisistoe Lesane, refuted Dr Thabane’s claims that he did not know where she was.

Mr Lesane, who claims to have a mandate to speak on Ms Rantšo’s behalf, said the minister had travelled abroad after being granted medical leave of absence by Dr Thabane.

He however refused to disclose her destination and what she was suffering from.

“It’s not true that the premier does not know where the minister is. She is on leave outside the country on a trip authorised by Thabane himself. She has medical leave. The premier was just entertaining the masses (when he professed ignorance of her whereabouts),” Mr Lesane said.

The workers also delivered the same petition to the National Assembly where it was received by the deputy speaker Teboho Lehloenya who was flanked by institution’s clerk, Fine Maema.

Mr Lehloenya also promised to respond to the petition after 14 working days since parliament was currently on a break.

He said the matter would be referred to the parliamentary social cluster committee which would summon Ms Rantšo and the union leaders for a hearing.

The Deputy Secretary of the National Clothing and Textile and Allied Workers Union, Tšepang Makakole, said they were not very happy with the responses from Dr Thabane and the National Assembly as they had hoped for immediate action to address their grievances.

“We expected to get an immediate response given that there will be a hike in taxi fares as of 1 July and we want our people (workers) to be catered for in terms of transport.

“We are also not happy with the disrespect shown to us by Minister Rantšo who did not show up. It is evident that she doesn’t have our interests at heart and she should leave office,” Mr Makakole said.