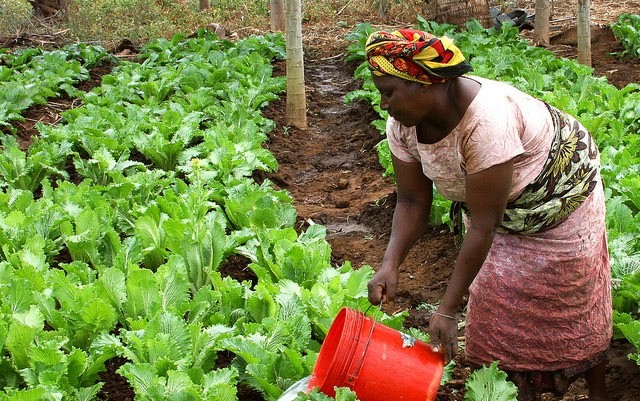 WOMEN in Lesotho have always played a major role in food production albeit at a subsistence level.

In this patriarchal and gendered society, it is inculcated into every female- from toddlers as young as five years to great grandmothers- that theirs is to till the land and put food on the table for their families.

Despite their prowess in farming, most women hardly venture into commercial farming, thanks to the patriarchal system and its attendant customary law precepts which deny women ownership of the land.

While the battle continues for the enactment of laws to fully empower women and give them equal access to land as their male counterparts, a new breed of female commercial farmers is gradually emerging.

Thirty-six-year-old Thakane Mphatsoane is one such woman blazing the trail and leading the way for female entrepreneurs in this male dominated sector.

Hailing from the tiny village of Ha Molengoane, Nazareth in the Maseru district, Ms Mphatsoane was no different from other little girls who were raised to till the land and provide food for their families.

But now she is a renowned farmer producing butternuts, mushrooms, maize, edible herbs and seedlings for other farmers at a commercial level.

Never in her wildest dreams, did she ever dream that one day the land would be her biggest source of income at the grander level of commercial and not subsistence farming.

The bug of commercial farming struck her by accident.

“It was during a trip to South Africa when my attention was caught by this giant billboard with the words: you need a farmer for you to be able to eat breakfast, lunch and supper,’ Ms Mphatsoane recalls.

“The words really struck and I pictured myself as a successful commercial farmer.  I told myself that there was a big opportunity waiting to be exploited and I decided to venture into commercial farming.”

Unfortunately, her first foray into commercial farming coincided with the 2015 El-Nino induced drought which hit Lesotho and other southern African countries hard. She did not realise anything substantial from her sweat that year.

“Things only began to look up in 2017 and I have never looked back since then. I remember renting land and growing 5000 heads of cabbage that year (2017). But as fate would have it, winter came too early and I didn’t harvest anything. I refused to buckle down and I then ploughed maize, radish and beetroot for the summer cropping season. Things went well and I was really encouraged,” she said.

While thousands of women farmers have been dispossessed of their land, Ms Mphatsoane is fortunate to have a farmer father who believes in empowering women.

“In 2017 my father gave me his land which already had water facilities. That was the beginning of my success as a commercial farmer. He said he had decided to give me that farm after realising my hard work and passion.

“He did not even tell me that he was going to give me that farm until one morning when he said to me, ‘the councilors are going to survey my farm and I want you to be there with them. I am giving you that land and your grandmother’s next to it. Tell them to survey both farms as one and register them under your name,” she said.

Her uncles and aunt later followed suit and also turned over their farms to her.

She wants to see more women venture into commercial farming as there are a lot of opportunities in the agro-business sector- from being a farmer, supplier of seedlings or a retailer.

“There is never a time you can go without money in your pocket if you are farmer. Farming is stylish and even billionaires are now into farming. You will not fail but you need to have patient, passionate and invest a lot of time and resources bearing in mind that sometimes things can go wrong the same way they can easily go right.

“Feeding the nation is a fulfilling experience, more so when I lend a helping hand to my fellow community members.”

“I used to produce 130 trays of seedlings but since last year, that has increased to more than 600. I have also ventured into the production of edible herbs. My output has really grown, thanks to the high demand for food. I must say, I love working with women in the Federation of Lesotho Entrepreneurs. Ours is an association of female farmers producing and selling mushrooms. We also engaged a consultant to assist us and test our soil. Covid-19 or no Covid-19, farming is the way to go,” Ms Mphatsoane.

“Covid-19 was a blessing in disguise when it hit the country last year. Our sales increased last April due to lockdown restrictions which restricted travel. Farmers were allowed to sell in their respective villages and people came in large numbers to buy our produce. We even ran out of stock. I remember very well that I was the only one in Khubetsoana supplying people with tomatoes,” Ms Seutloali (also 36) said.

A proud holder of an accounting diploma, Ms Seutloali’s love for farming was nurtured by her subsistence farmer grandparents who raised her.

As a commercial farmer producing tomatoes, green beans, carrots, peppers and mushrooms, Ms Seutloali has had to turn to fellow women to rent their land for her growing business.

“I have bought and registered some farms under my name. I have also come up with another arrangement where I lease two farms, plough both and take the produce from one while sharing the harvest of the other,” Ms Seutloali said.

By her own admission, women like her and Ms Mphatsoane are an exception rather than the norm. They are among a few fortunate female farmers.

Only last year, Ms Seutloali watched helplessly as a fellow female farmer was dispossessed of her land by her in-laws.

The case is a typical example showing that female nutrition champions in Lesotho still have a long way to go to break free from discriminatory the customary laws which favour men when it comes to land ownership and inheritance.

“I have not personally been on the receiving end of customary land rights disputes but there is a Thaba-Bosiu woman who fell victim after we had agreed I would rent her land. This was not to be after her in-laws demanded the land back. They argued that the old woman cannot lay claim to that land, saying it belonged to the family not her. Her husband is dead. I had to abandon the farming project because there were serious complications that I did not have the energy to deal with,” Ms Seutloali said.

She added that she had tried her best to assist the woman to recover the land from her in-laws.

She had even called the community chiefs and councilors to help and she looks forward to a positive outcome.

“Knowing that Basotho women, myself included, continue to champion issues of nutrition in the country despite the land challenges that we experience every day makes me really proud as a Mosotho woman. It is a good feeling because we are feeding the nation and positively touching other people’s lives,” Ms Seutloali said.

In her 2016 research titled: “Customary Law and its Implications on the Enjoyment of Human Rights by Women in Southern Africa: A Focus on Botswana, Lesotho and South Africa”, regional human rights lawyer Makanatsa Makonese says customary laws have a disproportionate discriminatory impact on women when compared to men.

“This is because customary law promotes patriarchal practices that give more privileges to men than women in many areas of life including in leadership, in society and within the family. In addition, history has shown that customary law has been distorted over time mainly with a view to entrenching patriarchy and suppressing the rights of women,” wrote Dr Makonese.

Movement for Economic Change (MEC) deputy leader and parliamentarian ‘Matlhohonolofatso Tšepang Tsita-Mosena has interacted with a lot of women experiencing challenges of being dispossessed of their land by their husbands, male siblings and relatives.

“As a country we need to get to a time where a woman is empowered. When a woman owns the land, we know her family will be secure because she can at least provide food for the family unlike when she has to ask for permission to use the land,” Ms Tsita-Mosena said.

“Women are still disadvantaged compared to their male counterparts. “It is unfair that women have to go the extra mile to safeguard their land rights and that of their children yet for men it is taken as a norm that they will get their land. For example, a married woman must have a will to claim rights over her own assets yet a man is not bothered about the will because the culture protects him.

“We need to change our mindsets; we need to engage more women to join the discourse on their land rights. That means having more women venturing into politics and understanding the dynamics of the economics of the country,” she said, adding they needed a robust non-partisan approach to articulating women’s land rights and other issues in parliament and in the constituencies,” Ms Tsita-Mosena said.

Athletes must get out of their comfort zones